The Adventures of Robin Hood: A Review

THE ADVENTURES OF ROBIN HOOD

England, ruled by the Normans, is under the 'care' of Prince John (Claude Rains) while his brother King Richard the Lion-Heart (Ian Hunter) is off to Crusade. Technically, Prince John isn't or shouldn't be in charge, but he's wrangled his way to be Regent.

Now comes shocking news: Richard is being held for ransom in Europe, which delights Prince John and his second-in-command, Sir Guy of Gisbourne (Basil Rathbone). Along with the comically inept High Sheriff of Nottingham (Melville Cooper), John and Sir Guy strangle the economic lifeblood of the native Saxon population.

One day, Much the Miller's Son (Herbert Mundin) kills a royal deer when Sir Guy catches him. Much is not afraid to tell Sir Guy off, but in to save him is a Saxon nobleman, Sir Robin of Locksley. Sir Robin is one of the few Saxons in position and rank, and he also is unafraid to declare his loyalty to Richard.

At first a mere nuisance, Sir Guy in particular soon starts seething with rage at this man, who is declared an outlaw and now goes by 'Robin Hood' (Errol Flynn). Robin soon starts gathering men to aid in thwarting the usurper's plans to keep the ransom being squeezed out for himself. Among them are his best friend Will of Gamwell, better known as Will Scarlett (Patric Knowles), a large man named John Little who is nicknamed 'Little John' (Alan Hale) and Friar Tuck (Eugene Pallette), a fat friar who is also an able swordsman. 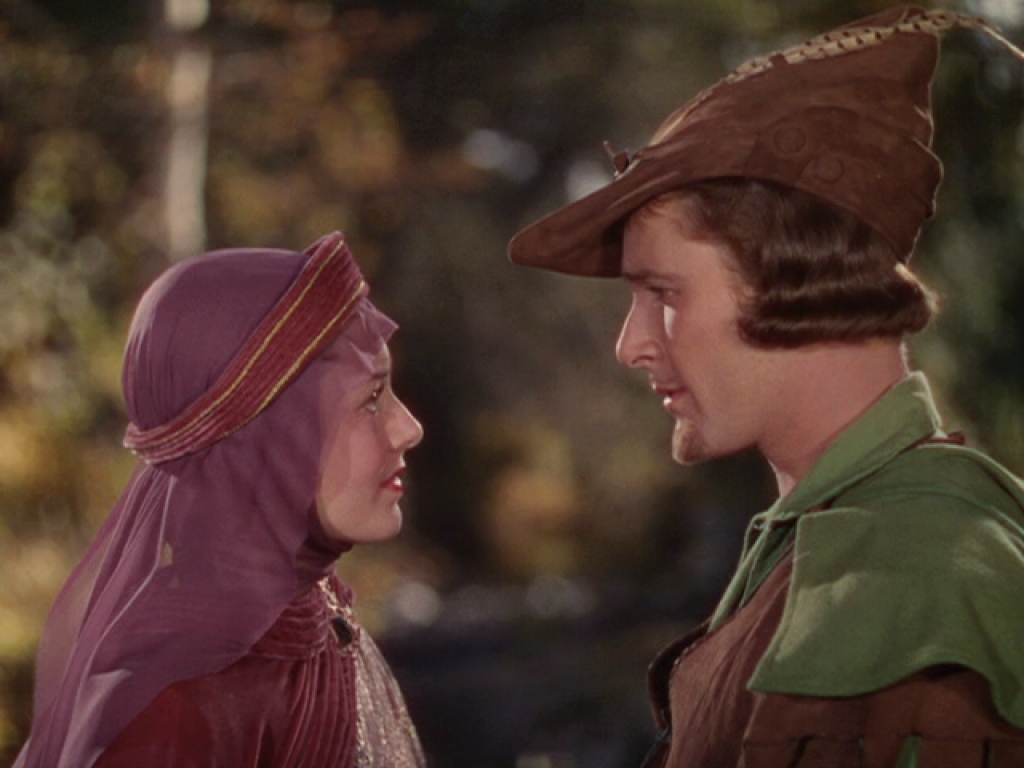 Together, they manage to capture Sir Guy and the Sheriff, who are accompanied by a Norman noblewoman, the Lady Marian Fitzwalter, a royal ward generally known as Maid Marian (Olivia de Havilland). At first, Maid Marian holds this Saxon outlaw in contempt, but as he guides her through the refugees in Sherwood Forest whom he protects and as she learns more, Maid Marian sees that perhaps things are not as she first thought.

A plot is hatched to outwit Robin via an archery contest, with Marian as unwitting bait. The rascally Robin cannot resist showing off his skill or a chance to see the beautiful royal ward again, and he's captured. Marian defies 'her' people to help Robin, and both acknowledge their love for each other. They also acknowledge that the divisions between Saxon and Norman are foolish, as they are now both loyal to England and Richard, together.

Unbeknownst to anyone, Richard has snuck back to England, and Prince John's court plots to assassinate the monarch and place John formally on the throne. John also plans to execute Maid Marian for helping Robin. It's up to Robin and his Merry Men, along with help from Maid Marian's loyal lady-in-waiting Bess (Una O'Connor) to stop this coup and rescue Marian.

As many a good story, our lovers are reunited and they live happily ever after. One of the best words for The Adventures of Robin Hood would be 'sumptuous'. The film is a glorious visual treat. This is primarily courtesy of the beautiful Technicolor, which renders all the costumes and art direction in luxurious and vibrant visuals.

Everything appears rich and grand. One can quibble about whether the fact that so much of The Adventures of Robin Hood was so spotless and shiny was historically inaccurate, but one has to remember that at some level, this is fantasy.

The film is also blessed with perhaps the finest cast assembled for a film. When people think 'Robin Hood', they think Errol Flynn even if they have never seen the film. That jolly, laughing figure with a devil-may-care manner and swashbuckling persona is how many see Robin Hood, down to the green tights.

It helps that Flynn is simply gorgeous. There's no getting around it: Flynn is breathtakingly beautiful, from his very first moment on screen you see what an insane handsome figure he was.

All that: the jolly manner and sheer physical beauty, may fool people into thinking Flynn was not acting. No, on the contrary, Flynn gives a very rich and charismatic performance. It is a remarkably deep performance.

We see this when we have at least one moment where he drops the cheerful veneer. As he escorts Maid Marian through the forest to see the Saxon refugees we see a sad man, one whose heart is pure, who fights only because it's his only recourse against injustice. "It's injustice I hate, not the Normans", he tells her.  That bravado is allowed to slip and we see a true noble-man.

We also have another extremely talented performer who is also blessed to be gorgeous: Flynn's longtime screen partner, Dame Olivia de Havilland. She is not just a pretty face. We see the evolution in Maid Marian, from the haughty Norman noblewoman to an English woman, who sees how wrong she was and how in helping Robin, she helps her true people: the English people.

We also see a woman in love, and she has a wonderful scene with O'Connor and later Flynn where she talks about whether it is love. 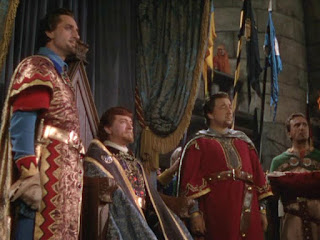 I go back to the cast, and every part is played brilliantly. Rains, my favorite actor of all times, makes Prince John deliberately camp, befitting someone with grand aspirations and no justification for such grandiose ideas about himself.  Cooper's Sheriff is the comic relief: obviously an idiot but unaware of it. Whether it is 'shielding' Prince John and pompously declaring "Oh, if only I could get to (Robin Hood)" or bumbling his way to an idea, he does wonders.

The highlight of the villains, however, is Rathbone as Sir Guy. It's interesting that Rathbone tended to play either overt villains or Sherlock Holmes, the antithesis of a villain. There never seemed to be a happy medium. Rathbone's Sir Guy was the perfect antagonist: hateful, arrogant and above all highly skilled. He was shrewd as well as contemptible, someone you messed with at your own peril.

The greatness about this Triumvirate of Evil is that they all balanced each other out: Rathbone's Sir Guy was the malevolent force who was very serious, Cooper's Sheriff was the buffoon you couldn't take serious and Rains' Prince John was a little of both.

The Merry Men were equally brilliant. From Hale's generally jolly Little John to Pallette's in turns gentle and loud Friar Tuck to Knowles' cocky Will Scarlett, each had a little moment.

My favorites however are Mundin's Much and O'Connor's Bess. As these unlikely lovers they were just so cute together. You instantly liked them as the counterpoint to the grand, sweeping romance of the gorgeous Flynn and de Havilland. They make their own adorable little pair: the flittery O'Connor and the rather plain Mundin courting in their own sweet way.  You instantly like them, the mix of the somewhat saucy lady-in-waiting forever watching over 'her little lamb' and the courageous but a touch naive miller's son.

Again, they are so cute. 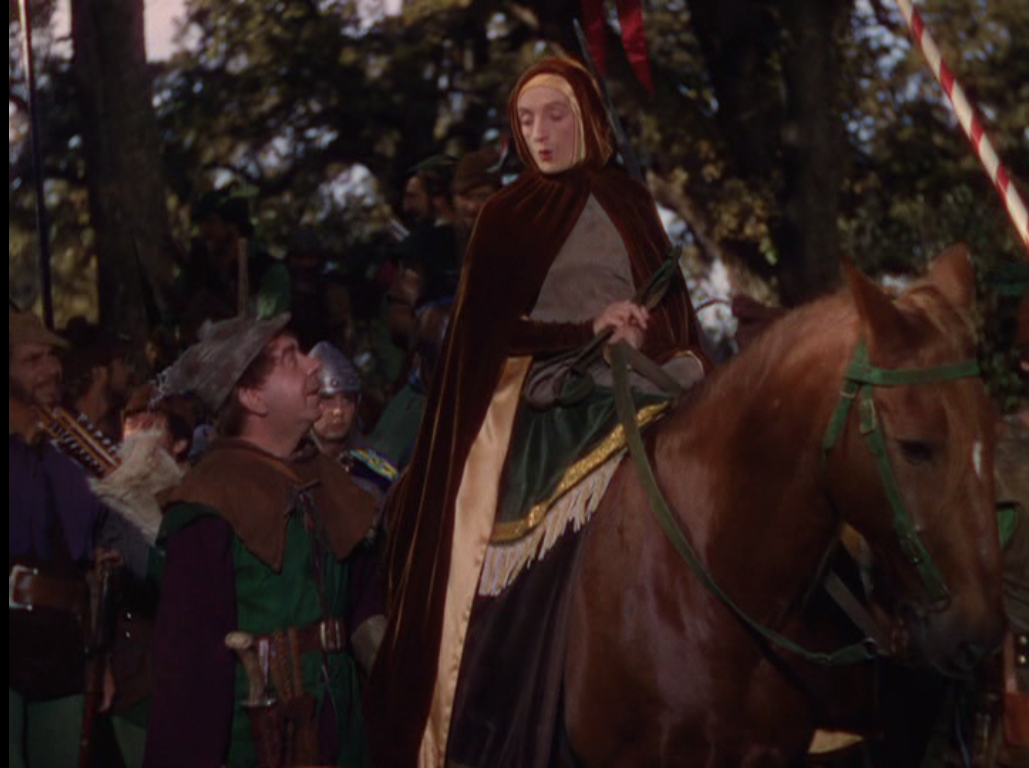 Much Ado About Bess...now there's an idea.

The film has two directors: William Keighley and Michael Curtiz, the latter among the greatest yet least-known and recognized of filmmakers. While it is hard for me to say which moment was by what director, we can see just how well both of them blended even though Curtiz replaced Keighley. The great thing about The Adventures of Robin Hood is that it manages to balance the romance with the action, never short-changing one.

Finally, one has to mention Erich Wolfgang Korngold's score, one of the finest ever written for film. From the rousing opening theme to its lush romantic melodies to the thrilling action music and the sweeping music for when Robin literally sweeps in to a shocked Sir Guy and Maid Marian, adding a 'Welcome to Sherwood Forest, my lady!", Korngold's score is a rare moment when the Academy got it right when it singled it out for recognition (along with the film's editing and art direction).

The Adventures of Robin Hood set the standard for all succeeding versions of this story of our noble outlaw, his lady fair and his merry men. Some of the other versions were grittier, maybe darker or even spoofs. However, I don't think any version can or ever really will come close to this version.

Everything in The Adventures of Robin Hood is perfect: the performances, the visuals, that glorious Korngold score. A joy from start to finish, it is essential viewing for anyone who loves movies.