A CHALLENGE FOR ROBIN HOOD

The de Courtnays rule their fiefdom with some benevolence, but once Sir Roger's father dies, Roger's evil, already quite visible, expands. Despite his father's wishes that his holdings be spread evenly among Robin, Roger and Roger's brother, the EVIL Roger decides to kill his brother and frame Robin. He also burns the will in front of everyone: the family priest, Friar Tuck (James Hayter) and the servants, including Little John (Leon Greene) and Will Scarlet (Douglas Mitchell).

Robin and Tuck manage to flee from the castle, Scarlet is arrested for helping their escape and Little John just wrestles. Roger is bothered by this, but he is equally distracted by the comely Lady Marian and her maidservant, Mary (Gay Hamilton).  Robin joins a group of Saxon outlaws thanks to his superior skills and commitment to fight on their side, and is given the nickname 'Robin Hood'.

It's now up to Robin and his not-so-Merry Men to thwart both Sir Roger and his boss, the Sheriff of Nottingham (John Arnatt) as well as clear Robin's name. 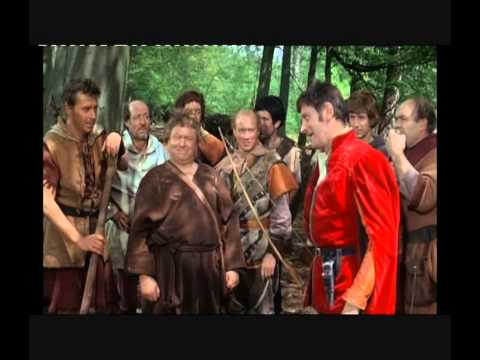 The primary challenge in A Challenge for Robin Hood is staying awake through it. Even if its running time is only 96 minutes, it feels endlessly longer. There's a certain B-Movie quality to the film, as if this were not just made on the cheap but also on the quick.

Without being too harsh, I can see A Challenge for Robin Hood being a featured film on Mystery Science Theater 3000.

The Hammer trappings are on display in the opening scene involving murder and the suggestion of Sir Roger literally hunting down young Stephen. There's also some surprising lecherous moments involving either the villainous Sheriff or the more camp Sir Roger.

Acting-wise, Ingham makes for a weak Robin Hood. He's generically handsome with a perpetually open shirt but little to suggest he is a commanding figure. Arnatt's Sheriff is overtly evil, the type of role that Michael Gough would play in some of those Hammer horror films before he became the cute and cuddly Alfred in Tim Burton's Batman films. Almost to counteract him is Blythe's very camp Sir Roger, who played evil with a Capital E to the point of being parody.

Faring worse were the Merry Men. Douglas Mitchell's Will Scarlet looked half-asleep and Greene's Little John did nothing but wrestle, as if he were nothing more than the muscle. Granted, Peter Bryan's screenplay gave them almost nothing to work  on, but they seemed nonentities. The worst was Hamilton as Maid Marian. She was totally blank as Marian, expressing no real emotion or apparently interest in the film.

The sole saving grace was Hayter's Friar Tuck, the pure comic relief who was allowed the wittiest moments. He could do serious, such as when he sees and overhears Sir Roger killing off his own brother, but for the most part Hayter was that little bit of levity in the film. One could say he had a leg up on everyone given he'd played the part before in The Story of Robin Hood and His Merrie Men, but Hayter was a delight in the part.

Curiously, Alfie Bass was billed as a 'guest star' in A Challenge for Robin Hood as a pie seller on his way to the de Courtnay Renaissance Faire. Why Bass was singled out as 'guest starring' is lost to time, but in a coincidence, both Bass and Hayter would go on to appear in the television comedy Are You Being Served?, with Bass replacing Hayter when the latter left the series.

The comedy seemed a bit odd. At the fair Tuck and Robin, who is disguised as a monk, tell the cloth seller they'll take the entire order of Lincoln green. "What order wears a cloth of green?" the shocked seller asks, to which Tuck replies, "The Order of St. Patrick".  While this is a funny bit, it's when the film descends to a literal pie fight that one gives up.

Not that having Robin wrestle Little John as "The Masked Monk" does not make things stranger.

The fights themselves are neither exciting or comical, so one guesses as to whether A Challenge for Robin Hood is meant to be action or comedy.

It ends up being neither, and worse, for reasons I cannot guess at, A Challenge for Robin Hood all but suggests there will be a sequel.

I can cut it some slack due to the fact that it looks as if money was an object here. I can also credit it for making interesting choices regarding the legend. For example, here Robin is a Norman nobleman rather than a Saxon and Marian is the Saxon. We also see that the Merry Men most associated with Robin were servants to the de Courtnays with only Alan-A-Dale as a genuine outlaw.

Apart from that though, A Challenge for Robin Hood is a misfire: slow, a bit dull save for Hayter and a bit of a shadow in the Robin Hood mythos.