What They Had: A Review 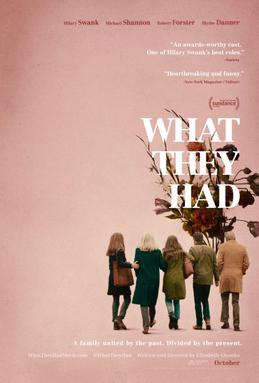 The tragedy and horror of Alzheimer's Disease is an intense and sad thing to witness. A recent 60 Minutes report on the advancement of Alzheimer's on a married couple just breaks your heart. By coincidence, I saw the report on Mike and Carol Daly as she succumbs to the ravages of the disease before I saw What They Had, which also deals with Alzheimer's. Perhaps that is why I was not as moved by What They Had as I was by the Daly's story For Better or Worse.

Or it might have been that What They Had was a bit too downloaded with other stories and sometimes played like a comedy.

Ruth (Blythe Danner) wanders off into a Chicago snowstorm around Christmastime. Her husband Bert (Robert Forster) is more annoyed than alarmed at this. His son Nicky (Michael Shannon) is more aggravated to downright hostile about the whole thing. He's more angry that Bert won't cooperate in putting Ruth in a 'reminiscence neighborhood', a facility that recreates the past to better help those who are slipping into dementia.

For help Nick, almost in desperation, turns to his sister Bridget, better known as Bitty (Hilary Swank). She's now in California with her husband Eddie (Josh Lucas) and their daughter Emma (Taissa Farmiga). Bitty has her own problems: deeply unhappy in her marriage and feeling life has passed her by, she also has to deal with Emma's stubbornness about going back to college.

Out to Chicago Bitty and Emma go, where Bert still insists he can care for Ruth better than any facility, Nick struggling with his new bar and Bitty fighting off temptation by an old flame, Gerry Hofsteader (William Smillie). Gerry sees them at their old Catholic church, which Bitty goes to despite being a lapsed Catholic. She has a pull-push manner with the divorced old boyfriend, who thinks she's divorced too.

Eventually Bitty returns to California and tells Eddie she wants a divorce, Bert acknowledges Nick's success by going to Nick's and telling him he makes a damn fine Manhattan and Bert dies, leaving Ruth still a bit muddled about who he is.

Ruth does have a moment of realization as Bitty returns to eventually put her in the Reminiscence Neighborhood. Bert died at the perfect time, she says. If it had been later she wouldn't remember him at all. If it had been sooner she couldn't have been able to endure the absence.

As Bitty leaves the facility, she encounters a turkey. This makes her smile, as 'turkey' was the endearing nickname Ruth and Bert used for each other.

What They Had is strange in that it's almost as if Ruth is incidental to all the other domestic dramas going on around them. Writer/director Elizabeth Chomko has so many stories spinning that some eventually have to fall away.

I don't remember what happened to Emma or why the struggle between her desire not to go to college and Bitty & Eddie's desire to became a subplot. Nick's romantic troubles with a longtime girlfriend who had broken up with him is mentioned a few times, then we see a woman with him at Bert's funeral. Is this the old girlfriend? A new girlfriend? Should we even care?

Bitty's unhappy marriage and her brief kiss with Gerry (who also disappears once the script stops caring about that story thread) isn't all that interesting. Moreover, Eddie, who has at most two to three scenes, doesn't seem like the type who deserves someone as morose as Bitty.

In short, there's already so much going on with all these other characters that Ruth and her slow descent, rather than be the focus of What They Had, almost ends up being a mere nuisance to these other stories.

It doesn't help that What They Had sometimes plays like farce rather than actual people in a very difficult situation. This is the case whenever the loud, abrasive and obnoxious Nick comes into the picture. It's a strange thing that while Nick is actually the most sensible of the group in terms of Ruth's situation, his brusque manner pushes you to side with the willfully blind Bert.

This is not to say that What They Had isn't well-acted. I would say Danner is the weakest one only because she is asked to look confused, more dottering than anything else. Forster, Shannon, Swank and Farmiga played their parts well even if the characters did come across as cliches: grumpy dad, jerk son, troubled mother, sullen teen.

What They Had is not a bad movie but I think a greater focus on the decisions regarding Ruth versus their children/grandchildren's domestic problems might have helped the film considerably. It's all right and that's really all I can say about it.