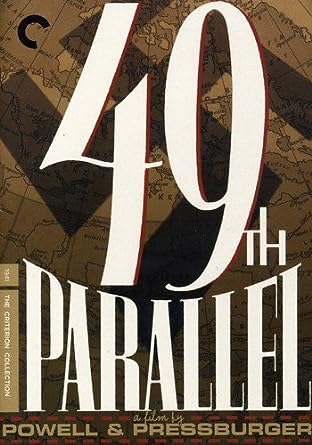 49th Parallel, the first work of the writing/directing team of Michael Powell and Emeric Pressburger, shares a similarity to the 1943 version of Titanic in that both are propaganda films. Unlike Titanic however, 49th Parallel has more compassion for 'the enemy' and is artistically crafted, even if is at times oddly illogical.

In the early days of World War II, German U-boat U-37 sinks a Canadian ship. Sailing further into Canadian waters, the captain sends a scouting party to gather supplies before attempting to sail back. However, the Royal Canadian Air Force stops them and blows the ship up, leaving the scouting party stranded in the far north.

Under the leadership of Lieutenant Hirth (Eric Portman), a fiercely loyal and true believer in The Fuhrer, he leads his men to a remote French-Canadian outpost where he encounters Johnnie (Laurence Olivier), a French-Canadian trapper recently returned from a long hunt and unaware of the war.

Slowly, the German sailors start killing those who get in their way in a desperate effort to escape to the United States across the 49th Parallel. Once they cross the US/Canadian border (the only undefended border in the world), the Germans can return to the Fatherland as the United States is officially neutral.

Slowly also, the Germans are whittled down one by one. Some are outright killed, like Lieutenant Kuhnecke (Raymond Lovell) when he fails to survive the plane crash he piloted. Others are killed by their fellow sailors, like Vogel (Niall MacGinnis). 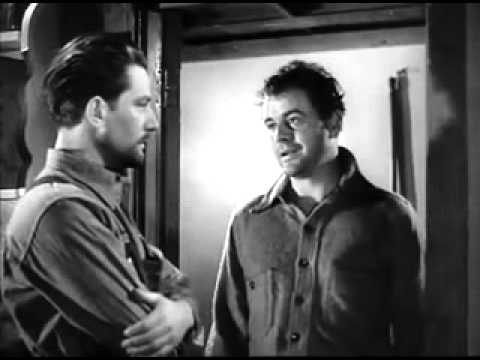 Vogel, along with the surviving Germans, has found refuge among a group of Hutterites of German descent. He is taken by their simple, honest lives and by Anna (Glynis Johns), who lost her parents to the Germans. Vogel ends up rejecting his former life and is accepted by the Hutterites, who delight in his baking skills. Hirth, however, is incensed and has Vogel shot for desertion.

As they continue their march across Canada, the group gets whittled down even more. Two encounter novelist Philip Armstrong Scott (Leslie Howard), who is doing research on Native American tribes for a novel. He is robbed by them, which does not seem to bother Scott all that much. It's the destruction of his beloved paintings and burning of his books that does stir him to action after they escape, leaving just Hirth to make his escape.

Things culminate near Niagara Falls, where Hirth faces off against Andy Brock (Raymond Massey), a Canadian soldier whose gone AWOL and attempting to return. Both are caught in a train's freight car, with Hirth holding Brock hostage until they cross the border. They do make it over the border, where two surprised United States customs agents are astonished to find them.

Hirth demands they take him to the nearest German consulate, which would delight the Reich that has been promoting him as a hero. It looks like despite Hirth's actions and notoriety he will get away, until Brock points out almost in desperation that he and Hirth are technically 'unlisted freight'. Using that as their excuse, the customs agents order the train back across the Canadian border so that these 'unlisted freights' can be 'officially marked'. Brock, now both steaming across to Canada and steaming mad at having had his clothes stolen, decides to give our Nazi friend a proper Canadian welcome with his fists.

Despite getting top billing Howard, Olivier and Massey essentially have cameos in 49th Parallel. Olivier dies in the first part, and both Howard and Massey appear only near the end of the film. Each appeared in only one segment, with Olivier probably being the longest role of the three.

As a side note, this is the only time the Canadian Massey played a Canadian on film. It also reminds me of a Golden Girls episode, where Rose claims that her mother had plastic surgery that made her end up looking like Raymond Massey. When Rose accused 'St. Olaf's moodiest plastic surgeon' of malpractice and ruined his business, she later learned that "that was the look she was going for". That explains why I couldn't stop giggling when Massey appeared on screen, but I digress.

Curiously, Howard's sequence could have been trimmed or cut out altogether and not affect the story save for how to explain the loss of one of the Germans. I say 'curiously' because Howard was fiercely patriotic and fervently anti-Nazi, so 49th Parallel would be right up his street. Howard in fact was so strongly anti-Nazi that he was shot down by the Germans while on a Lisbon-to-Bristol flight, perhaps in a deliberate assassination. In any case, Howard's performance, while brief, made Scott surprisingly nonchalant about these Germans, that is until they destroy his Matisse and Picasso.

Perhaps the worst performance is Olivier, whose broad, BROAD French-Canadian accent and manner made him look wildly comic. However, to his credit his death scene was moving.

It was moving not just for Olivier, but for MacGinnis as Vogel, who was the most sympathetic of the Germans. Vogel gives the dying Johnnie what he requested: his family rosary. We see the complexity in 49th Parallel's script by having this moment quickly followed with Vogel tearing down the picture of King George VI and Queen Elizabeth and scratching out a swastika where the picture was.

MacGinnis' most moving moments come with the Hutterites, where we see the humanity creeping in. In his tenderness towards Anna (equally well-played by Johns), and his joy at baking versus Hirth's brutishness, 49th Parallel gives us the sense that these Germans are not monsters, but instead actual people who have been shaped by them. 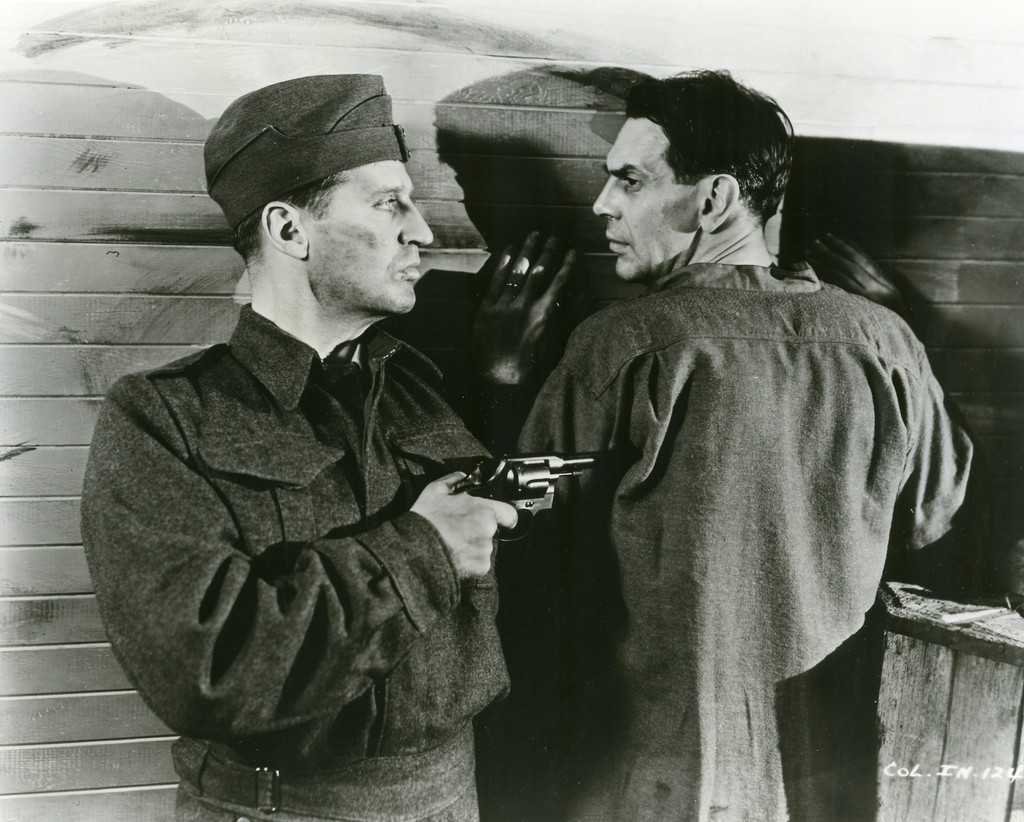 Powell and Pressburger give us these subtle moments, such as when after Hirth's fiery pro-Nazi speech, the remaining German sailors give the Nazi salute, save for Vogel, who merely snaps to attention. We also see the power of their dialogue when Peter (Anton Walbrook), the leader of the Huttite community, gives his own fiery response. Never was the smack laid down so forcefully without force being used.

It is Portman who gives the standout performance as Hirth. He is menacing, even frightening as the true believer, but he is not wild and over-the-top. He has a sneer, but it is how he so passionately holds to Mein Kampf as his 'Bible' that makes his frightening. Whether holding that Eskimos (Inuits today) and Negroes are one step above 'the Jews' because Hitler said so or his speech to his 'fellow Germans' among the Huttites, Portman makes Hirth the most dangerous kind of evil: the one who 'knows' he has reason on his side.

49th Parallel also has the benefit of having a rare film score by Ralph Vaughn Williams, one of the great British composers, along with beautiful cinematography by Freddy Young and editing by David Lean. The film's directing and editing make scenes such as the airplane crash and the confrontations so well-crafted.

One major flaw in 49th Parallel is its curious lack of interest in geography. Hirth is leading his men to Vancouver, where he hopes to escape via a Japanese ship. For reasons never explained, Hirth (now alone) flies across from the west coast to the east coast so as to go through the border at Niagara Falls. One would think it be easier to sneak across from Vancouver to Seattle and we never get an explanation as to why Hirth flew across undetected.

Still, these are minor points.

49th Parallel has strong performances apart from a hammy Olivier, a gripping story and moments of genuine humanity among the enemy. It is propaganda, and well-crafted propaganda, but it also is a well-crafted work apart from that from a writing/directing team that would go on to greater artistic success.