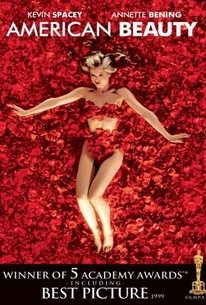 In case you didn't know, Suburbia is Hell and the people who live there live lives of loud desperation, unfulfilled, miserable, empty. I have no idea why this is seen as something original, but American Beauty somehow thinks that this tale of Suburban Malaise is speaking truth to power. American Beauty, after almost twenty years, is more a product of its time than an eternal tale of human misery among the placid and perfectly manicured lawns.

A variation of Lolita with a hint of Spoon River Anthology, American Beauty is narrated from beyond the grave by Lester Burnham (Kevin Spacey). Lester has been writing for Media Monthly Magazine for 14 years and may potentially be laid off. Not that Lester actually cares whether he is or not, as he has given up on life. His wife and daughter are no help or comfort and by his own admission consider him a loser.

His wife Carolyn (Annette Bening) is obsessed with perfection and projecting a successful career image as a real estate agent. She, however, flounders in her profession and cannot match the success of her rival, Buddy 'King' Kane (Peter Gallagher). Lester and Carolyn's daughter Jane (Thora Birch) is morose and grumpy and hates both of them.

That does make her being part of the cheer squad at her school a puzzling decision. In an effort to 'show support', Lester and Carolyn go to a basketball game where Jane will entertain as part of the 'Spartanettes' dance team. And that's where Lester finds himself reborn. That 'recall to life' comes in the delicious form of Angela Hayes (Mena Suvari), the aspiring model and what I would call Jane's frenemy (though the term hadn't been created yet).

This new spark shocks his wife and daughter, though only Jane knows of Lester's fixation. All Carolyn knows is that Lester has lost his mind.

He quits his job (after blackmailing the company to give him a year's pay), starts smoking pot and working out. He also tells off his wife and daughter while continuing to flirt with Angela, who flirts right back.

New complications come in the form of the Burnhams' neighbors, the Fitts. There's retired USMC Colonel Frank Fitts (Chris Cooper), his catatonic wife Barbara (Allison Janney) and their son Ricky (Wes Bentley). Ricky loves videotaping the strangest things, such as floating plastic bag that he calls 'the most beautiful thing he's ever seen'. He's started videotaping the Burnhams, especially Jane, much to her initial horror and disgust but who soon warms to things. Ricky also funds his videotaping through pot-selling, which delights Lester as he tokes away while bulking up to seduce Angela.

Things really explode when Lester, now happily flipping burgers, enters the last day of his life. On this fateful day, Carolyn's affair with Buddy is discovered, Jane and Angela have a falling-out over Ricky, Ricky and Frank have a falling-out over a series of misunderstandings leading the virulently homophobic Colonel to think Ricky's gay, Angela reveals she is actually a virgin, and Lester is shot.

American Beauty still holds some revered place in the pantheon of film critics, and I cannot say that it was a bad film, let alone badly-made. Director Sam Mendes in his film directing debut brought a beautiful-looking film. Mendes, and screenwriter Alan Ball, did know how to use music as subtext to reveal character. There was Carolyn's belting out Don't Rain on My Parade to lift her mood before finding Lester had grown more self-indulgent. There is also the 'mood music' Carolyn insists on playing at the very unhappy family dinner, where the newly-liberated Lester lets his rage out while Call Me Irresponsible plays on.

I just don't see now what I saw then, even when I 'look closer'.

I oftentimes wondered whether American Beauty was a very dark Saturday Night Live sketch gone bonkers, particularly with Bening's outwardly strong but internally crushed Carolyn. Her 'hysterical' reaction to Lester's blase attitude about quitting his job (and his openness about the circumstances) was broad to the point of infinity.

These were character sketches, not actual human beings to me. The disaffected middle-aged man who dumps his burdens. The shrewish wife. The sullen teen daughter. The teen temptress. The creepy neighbor kid. The homophobic military man who unsurprisingly turns out to be gay himself. Each of them was more a type than a person, all fitting into their own set roles.

Watching the film again, I could not help think that subconsciously or not, Ball drew from Vladimir Nabokov's Lolita. Angela Hayes is not far from Dolores Haze (Lolita's real name). Like our nymphet, Angela has been tempting men sexually since she was twelve, albeit Angela says she knows it and is conscious of it.

As a side note, this is something Humbert would say...that Lolita seduced him rather than he raping her.

Granted, there are differences. Lester for example is more open about his desires than Humbert, and he is the one murdered versus being a murderer. However, I don't think the distance is too far from Lolita to American Beauty.

I saw in the performances people 'acting', perhaps to compensate for these not being real people. From Spacey's 'I don't give a damn' manner to Bentley's 'I'm consciously bizarre' (his Vulcan eyebrows help) to Cooper's 'Look at me raging about gays in awful terms only to reveal myself to be suppressed' and Birch's 'I'm a mopey teenager', each character is one I found rather cartoonish and downright freakish.

Ball's cynicism, nihilism and utter hopelessness flows through all of American Beauty, this sense of the endless despair all these people have. I also have somewhat of a difficulty accepting all the wild coincidences on the day of Lester's death.

In terms of production I can't fault American Beauty. It has a strong score from Thomas Newman and the milieu of this Suburban Nightmare is well-rendered. I also did learn that 'Star 69' is how you dial the telephone number that just called you.

As I look back on American Beauty, I don't see actual people, let alone people I care about or for. I see types. I see almost a spoof of the 'Suburbianites Are Empty, Hollow Shells of Humans' story with overblown caricatures.

Let's not run with the dogs tonight...