British expatriate photographer Ronnie Curtis returns to London most reluctantly. The reason? Her father's death. Her father, however, wasn't just any man, but Rabbi Schlomo Krushka, the influential head of the London Orthodox Jewish community.

Now Ronit Krushka (Rachel Weisz) finds herself back in the world she turned away from, with Rav (the Orthodox term for 'rabbi') Krushka essentially disinheriting her. Not only did he leave all his property to the synagogue, but the newspaper reported that he had no children.

Ronit also comes to meet Dovid Kuperman (Alessandro Nivola), her old friend and her father's successor. He's married to Esti (Rachel McAdams), also her friend. Over the course of the film, we make a serious of shocking discoveries.

Ronit does not fit into the Orthodox world of her youth, having abandoned it due to two factors. The first is Ronit's own personal rejection of the restrictions of the Orthodox Jewish life as she sees it. The second is due to, long ago, Rav Krushka discovering her and Esti in a kiss. Rav Kuperman knows nothing of Esti's past nor the fact that she is a lesbian.

Things reach a crisis when Ronit and Esti resume their relationship. They are spotted together, leading to a formal complaint at the Orthodox school where Esti teaches. It also runs the risk of Dovid taking Rav Krushka's place despite his own unblemished reputation. Despite Esti's internal conflict, she and Rovit spend a night in adultery.

Esti, discovering she is pregnant, struggles with her desires for Ronit and desires for her Orthodox life. In the end, Dovid declines the position of rabbi and agrees to let Esti go. Esti, however, does not go with Ronit back to New York, deciding she needs to know where Esti herself needs to go. Ronit for her part makes peace with her father and his world.

Disobedience is one of the best-acted films of the year. I think all three performances are so moving in this bizarre love triangle, each giving simply brilliant performances. Weisz, curiously the only actual British actress in a British-centered film (McAdams is Canadian, Nivola is American), communicates so much with little dialogue.

We see Ronit's conflict, sorrow, even rage with mostly just her face and eyes and body. She, like everyone else in Disobedience, never has a 'raging' scene where she screams or erupts. Instead, under the strong direction of Sebastian Lelio, communicates all her emotions with a clarity that does not require fireworks and theatrics.

That is one of the highlights of Disobedience: while they speak softly, they speak volumes, keeping things emotionally tight and simultaneously expressive.

Weisz's Ronit shows her contempt for the rules and regulations of the Orthodox world, yet you also see that to a point, she yearns for inclusion and acceptance within it, or at least that of the father she will never reconcile with.

She is equally matched by McAdams and Nivola, both of whom reveal a depth to their talent that perhaps has not been seen before. McAdams' Esti is similarly quiet but that does not make her internal conflict any less strong. Esti, unlike Ronit, seems to genuinely love the structure Orthodox Judaism gives her but she still has desires that she does not want to deny. 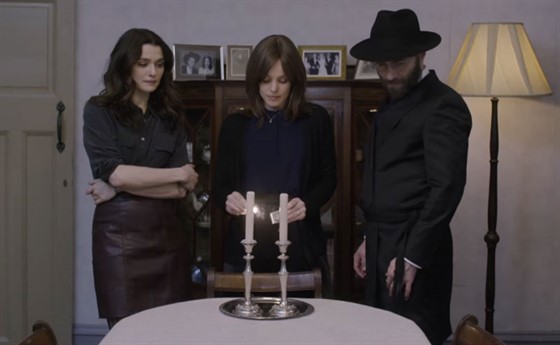 It's a credit to both Leilo and Rebecca Lenkiewicz's adaptation of Naomi Alderman's novel and Nivola's performance that Dovid does not come across as either a monster or a cuckold. Rather, Dovid is a very gentle man, passionate about his faith, who loves Esti, cares for Ronit but whose goodness does hinder him to a situation he finds himself in. His final scene where he all but breaks down as he declines the position while 'freeing' Esti is not just so incredibly well-acted but well-directed. The camera work where Dovid fades in and out of focus reveals his own internal struggle.

The film also does symbolism without it feeling overt and out of place. Starting from the opening scene where Rav Krushka discusses the three types of creations HaShem made (the purity of the angels, the instincts of the beasts, and the free will of Man) down to Ronit and Esti reminiscing to The Cure's Lovesong, things are subtle but inform the story.

Another positive is that the Orthodox Jewish world of Disobedience, a world most of us do not know, is not demeaned or ridiculed or made to look evil. Instead, the film showed that the Orthodox Jewish community is shown as what they, or all communities are: filled with good people who live out their lives according to the dictates of their worldview. Mrs. Shapiro's complaints of Esti were not shown as motivated by malice but by her own understanding of right and wrong.

Disobedience, as I said, may not be thoroughly original: the troubled outsider returning to her old world and bringing in chaos intentional or not. However, it is so well-acted and directed, with a strong story about love and guilt and being yourself that it moves the viewer.

Whatever words they say, I will always love you...