The Story of Robin Hood and His Merrie Men: A Review 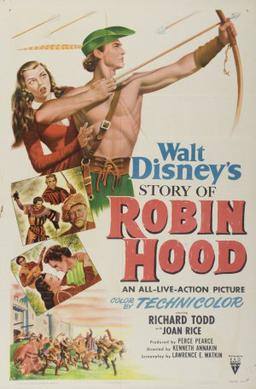 THE STORY OF ROBIN HOOD AND HIS MERRIE MEN

The Disney Company was slowly shifting from animated to live-action features. The Story of Robin Hood and His Merrie Men was their second live-action feature, and while it is not as well-remembered as other films, it is pleasant enough.

Young Robin Fitzooth (Richard Todd) is in the employ of the Earl of Huntington (Clement McCallin), whose daughter is the young Maid Marian (Joan Rice). The Earl is joining King Richard (Patrick Barr) to go on a Crusade, and Marian will be the personal attendant to the Queen Mother (Martita Hunt). While he's away, England will be looked over by Richard's brother, John (Hubert Gregg).

Richard's probably not even gone from England before John shows his dark side. Determined to enrich himself, he creates a de facto personal army in the Midlands, using his newly-appointed Sheriff of Nottingham (Peter Finch) to squeeze the populace. Robin's father Hugh (Reginald Tate) refuses to join in Nottingham's army. Even the Fitzooth's join win at the archery contest will not break them.

Nottingham fears Fitzooth will be inspiration for a rebellion, so he has him killed. Robin escapes into Sherwood and joins a group of other outlaws forced to hide out due to John and Nottingham's oppression.  Soon, Robin begins to lead them, thwarting the Sheriff.

Other men join them. Some, like John Little or Little John (James Robertson Justice) do so willingly. Others, like feisty but avuncular Friar Tuck (James Hayter), not so much. Things come to a head when news of Richard's capture makes it to England.

A collection for ransom is begun, but John's lands curiously plead poverty. A personal visit from the Queen Mother and the Archbishop of Canterbury is made for show, but Marian has snuck out the night previous to learn about her old friend Robin and his outlaws. She finds them to be loyal to the King, and even persuades them to give her their collected money to use for the ransom and show their loyalty.

The Queen Mother is impressed. John and the Sheriff appalled.

Eventually, an effort to frame Robin fails, Marian is taken prisoner and Robin and his men make a daring raid to both clear their names and rescue the fair Maid Marian. 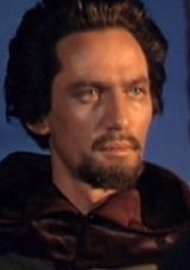 Perhaps the biggest surprise to those watching The Story of Robin Hood and His Merrie Men is seeing Peter Finch as the villainous Sheriff of Nottingham. While Finch is hampered by a terrible wig, he gives a good but not great performance. It isn't on the level of his later work such as Sunday Bloody Sunday or Network, but he's evil enough.

What I mean is that as this is a Disney movie, he can't be monstrous. Finch's Sheriff is unpleasant, even nasty, but not hideous. I think it is because he defers greatly to Gregg's Prince John, and he seems a trifle camp as our villain.

One of the more curious elements in The Story of Robin Hood is the role of women. Here, Hunt's Queen Mother is more directly involved, and she balances imperiousness with gentleness. In particular are her interactions with Rice's Maid Marion, where there is a grandmother feel to where even when she is reprimanding Marion, it's more out of concern than anger.

Rice was pleasant as Marian, a girl who is openly flirtatious with her family's servant's son but who has some gumption to her. She is unafraid to go after the truth, even if means temporarily donning drag to infiltrate the Merrie Men. Sometimes she is reduced to both making goggly-eyes at Robin and 'a damsel in distress', but Rice has her moments.

Incidentally, I figure the 'Merrie' rather than 'Merry' is used to try and make it all more medieval English.

Out of the Merrie Men, the standout is Hayter as Friar Tuck. He's impish and playful: when we first meet him, he's singing a love ballad meant as a duet, where he plays both brave knight and maiden fair. He has a jolly manner to him, but is also able to fight strongly against the Sheriff's men.

Curiously, Hayter would reprise his role as Friar Tuck in A Challenge for Robin Hood, which was made by Hammer Films, better known for their horror than their frolics.

As for Todd, he is again pleasant as Robin. At times looking older than his thirty-three years, his Robin was a mix of action and naivete, between the young man thrust into danger and the warrior he became.

I think the best description for The Story of Robin Hood and His Merrie Men is 'pleasant'. If there's one thing that does annoy, it's Elton Hayes' Allan-A-Dale, who breaks out into balladeering at nearly every appearance. Sometimes you just want to smack him and break his lute.

Apart from the somewhat incessant ballad-making, The Story of Robin Hood and His Merrie Men is 'pleasant', a nice bit of distraction that should entertain those looking for light entertainment in a clean Disney spirit. By no means the best version of Robin Hood, it's pleasant enough.