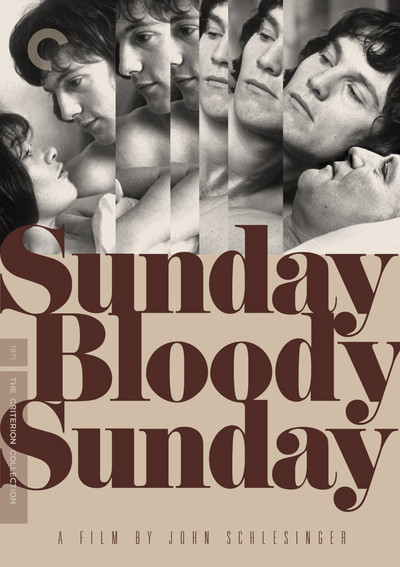 The subject of Sunday Bloody Sunday was pretty shocking for its time.  Even now, this 'bizarre love triangle' where a man and a woman share a lover is still pretty radical.  Sunday Bloody Sunday stays away from sensationalizing the story or making it a tawdry affair.  Its exploration of the curious turns of the heart is worth looking at.

Alex, still going through the aftereffects of her divorce, spends the weekend with Bob watching over the home and kids of friends, where the lowest point is when the family dog Kenyatta is killed when it ran out into the street.  This almost killed one of the children, but Bob through his art helps.  Alex is also haunted by her past during the War and her present by her distant and disapproving parents.  She picks up Bill (Frank Windsor), who had come to her employment agency before she decides to resign her job.

Daniel's greatest issue is enduring difficult patients, but he has his circle of friends and his beloved art and music.  He also has Bob, with whom he hopes to travel to Italy in the spring. Daniel is both out and in: he does not make a great deal about his homosexuality publicly and his friends know he's gay, but he still keeps his private life secret to his Jewish family.  This might explain why at his nephew's bar mitzvah, his widowed father and aunt chide him for still being single and try to fix him up.

Bob has received an invitation to exhibit in New York, but that means leaving Alex and Daniel.  Both of them, in their own way, decide that Bob is not worth following to New York or asking him to hold off.  Finally meeting face-to-face, Alex and Daniel exchange pleasantries and decide to let him go.  All three part on friendly terms, and Daniel addresses the camera to tell us that he is happy. 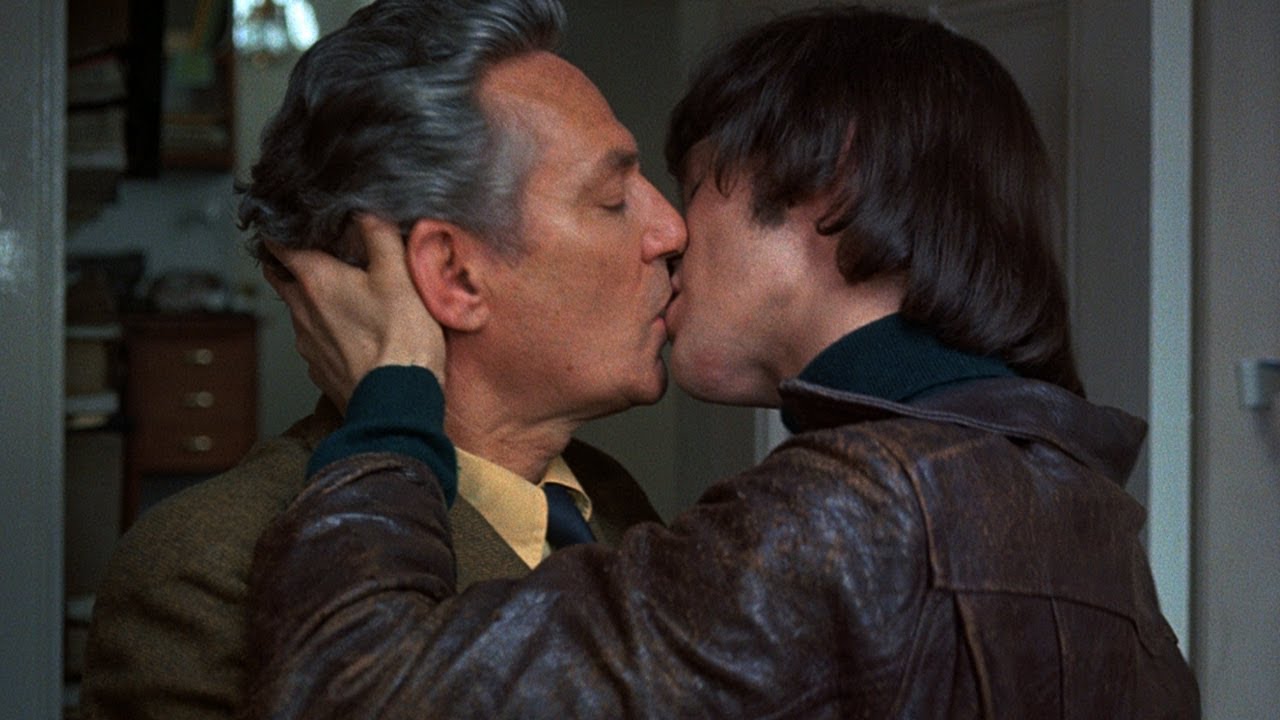 We can tell that Daniel is happy because before we see him speak to us, we see him learning Italian.  He is going on with his life, going on his trip without his lover.  In short, he is now a man in full, unencumbered by affairs of the heart.

Sunday Bloody Sunday is a step forward in the portrayal of gay/bisexual characters in that Daniel is neither ashamed or tortured by his sexuality and Bob does not appear troubled by having a relationship with people of both genders.

I do wonder whether the fact that Bob is younger than both Alex and especially Daniel is indicative of a generational shift on views of love.  I never got the sense that Bob truly loved either, though he seemed more affectionate towards Alex.  This might be because Alex had at least a semblance of a family which he could interact and show a tender, almost paternal side.  He couldn't do this way Daniel's family, as the idea of Bob bringing a 'boyfriend' to the bar mitzvah would still cause raised eyebrows.

I also am puzzled why Alex and Daniel would settle for a part of Bob, knowing full well that he won't belong to either. I suppose love is very strange.

Director John Schlesinger's follow-up to Midnight Cowboy touches again on a hidden world, where love is if not sale at least on a trial basis.  He draws great performances out of his triangle.  Peter Finch plays against type as this gay man, but he also plays Daniel as a man who sees his sexuality as part of his being, not the whole of it. There's a brief bit where Daniel is talking to his neighbor, and his eyes quickly but momentarily shift to a handsome young jogger passing by.  It's subtle, but well-done to show Daniel is attracted to attractive men.

It's more than like that Daniel Hirsh probably gets more blowback for being Jewish than for being gay.

At the bar mitzvah, we sense that he is looking for spiritual connection as well as a physical one, which perhaps is why he did not fight to keep Bob with him or become hysterical at the thought of his lover leaving.  Daniel might be sad to see the end of this affair, but he is not going to chase after him.

Finch's closing monologue, directed somewhat at us, is a wonderful piece of acting, contemplating a bit about his life and realizing he is content. Jackson brings life to Alex, a woman haunted by her own past but who also sees that Bob won't block her future.  Her tryst with Bill does make her a bit of a tart: after all, she has sex with two men in a twenty-four hour period. However, when she is playing opposite someone other than Head, be it Peggy Ashcroft as her mother, Winston as Bill or with the children, we see that Jackson makes Alex a fascinating woman to where a whole film could be built around her.

Perhaps Head underplayed Bob, or it could be that he is not on the same level as Jackson or Finch.  However, I cut him some slack because Bob is supposed to be, at least to me, a bit of a mystery.  I'm not sure he can love, truly love, anyone.  He might have feelings for Alex and Daniel, and he didn't come across as selfish.  He wasn't a rent boy of any kind, but he also was someone who freely floated between two people.

The gender of the people is immaterial.  The fact that Bob could go from one person's bed to another person's bed to me shows not indecisiveness but far too much casualness.  Love is a very strange thing, but it isn't that free.

Bessie Love, who starred in silent films and starred in The Broadway Melody, the first sound film to win Best Picture, had a small but amusing role as the telephone operator connecting and reporting to these three intertwined people.

Certain elements of Sunday Bloody Sunday will probably shock even today's audiences, let alone the ones in 1970. I was aghast to see not just the free and casual bed-hopping, but children openly smoking.  Whether they were smoking pot as they claimed or not, it still ought to have surprised people then.

Sunday Bloody Sunday takes a remarkably adult and mature take on this three-way love affair.  It is not sensational.  In fact, it is pretty quiet and straightforward.  With strong performance by Finch and Jackson, excellent direction from Schlesinger and Penelope Gilliat's screenplay (all of whom received Oscar nominations), Sunday Bloody Sunday is a strong film on the curious nature of love.