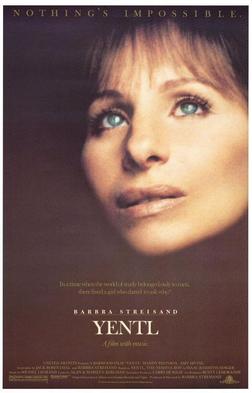 Yentl was something more than a passion project for its writer, director and star: Barbra Streisand.  It was an obsession, something she needed to create and complete no matter what.  After seeing Yentl, I thought about that fine line between 'passion project' and 'vanity project', for Yentl happily zigs and zags across that line.

In 1904, Yentl (Streisand) is an unmarried Jewish woman in an Eastern European shtetl. She yearns to study the Talmud, but as a woman this is forbidden to her by Jewish law and custom.  Her culture expects that she not study, defer to a man be it father or husband, and be satisfied with being a mother and homemaker.  Her beloved Papa (Nehemiah Persoff), however, indulges her by teaching Yentl and answering as many inquisitive questions as he can.  Papa would prefer that she fulfill her womanly duties, but as his son Anshel died, Yentl is as close to a son as he has.

Papa dies, and with no man to care for her, this old maid is about to be shipped off to a shop in the shtetl.  At the thought of this, she cuts her hair, flees her village and more importantly, dresses like a man.  Seeking guidance and perhaps forgiveness from above, she eventually wanders into seeking to join a yeshiva where she can study her beloved Judaic law.

She takes on the name 'Anshel' then meets Avigdor (Mandy Patinkin), a burly young man whose pursuit of knowledge equals her own.  'Anshel' continues this cross-dressing rouse and is admitted into the yeshiva.  Avigdor has a beloved, Hadass (Amy Irving), who loves him too.  Their engagement is broken by Hadass' parents, however, when they discover that Avigdor's brother did not die of illness but by suicide. Fearing a stain of insanity in Avigdor's family, the wedding is off, but neither can object.

Avigdor considers 'Anshel' his best friend, and he urges him to take his place with Hadass.  Hadass' parents also look on 'Anshel' with delight, and while Hadass' heart still remains with Avigdor, she will as a respectable Jewish woman do as her parents say.  As such, Yentl finds herself in the odd position of marrying a woman, even though Yentl herself has feelings for Avigdor.

Yentl soon stars sharing her love of knowledge to Hadass, who is starting to grow fond of 'Anshel'.  Yentl's own feelings become jumbled, not so much sexually but in terms of whether and how long she can keep up this drag act.  Finally, while on a trip with Avigdor, she literally reveals all, much to Avigdor's astonishment and anger.

Yentl writes out a confession, admitting to her deception.  As Jewish law would find the marriage between two women forbidden, not to mention that this 'marriage' was unconsummated, it frees Hadass and Avigdor to marry, while Yentl, now dressing as a woman, heads out to the New World to see if there, her dual desire for womanhood and knowledge can be fulfilled.

It is hard to call Yentl a true musical, at least in the traditional sense. Yes, there are songs that are sung, but unlike every other musical that I know of, Yentl opts to have every song sung by one person: Streisand herself.

Streisand, for good or ill, has a reputation for both perfectionism and egocentricity, and having her be the sole singing in Yentl does not help in mollifying that reputation. No one questions Streisand's singing abilities: she is one of the finest voices of the Twentieth Century.

However, her decision to give herself all the songs comes across as a shockingly vain decision, especially given that sometimes her singing is done is voiceover.  There is only so many times one can endure hearing someone's feelings set to music.

Moreover, the songs are, to use a good Yiddish term, schmaltzy. Apart from Papa, Can You Hear Me?, I don't think anyone can sing the songs now, let alone tell one song from another.  Part of the sameness in Yentl's songs come from one singer performing them all, and part from them all sounding the same, almost as if it's one long song cut into bits save for Papa, Can You Hear Me?, which is the only actual standout.

Even more bizarre, is that Patinkin is known as a good singer, down to winning a Tony Award for Evita before Yentl was made. Why Streisand never thought to give Patinkin or anyone else a chance for a solo or even a duet is a mystery to me.  I praise Streisand for not making Yentl a musical comedy, as there are upbeat numbers.  One wonders, however, if perhaps the film would have been better served if there had been, or at least had someone else express themselves in song.

Credit should be given to Streisand as a visual artist, for Yentl is a beautiful-looking film.  At times, the visuals become almost absurd in their lushness, such as when Yentl and Avigdor are about to kiss once she's revealed herself.  Streisand makes sure to bathe herself in such bright light as to become almost parody, and another time when she is belting out another number the spotlight looks almost as if a flashlight suddenly burst upon her.

These moments do at times seem vain and excessive, pandering to her ego than to her story. 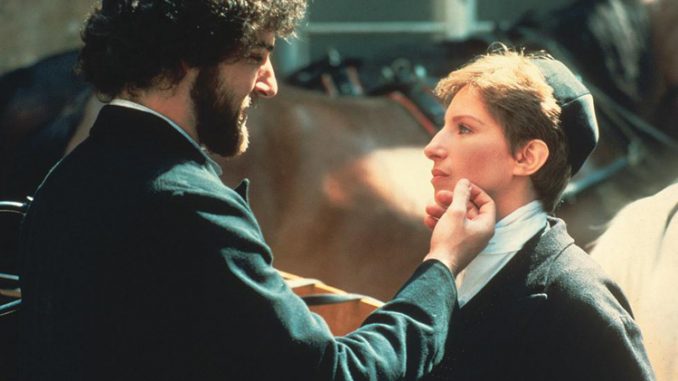 However, in Streisand's defense, she takes Isaac Bashevis Singer's story Yentl the Yeshiva Boy and does not make it into a comical situation.  Resisting the temptation to have even a little fun with the gender-bending, Yentl is a perfectly straight and serious look at this woman who yearns for something that her society has forbidden her to do.

She also draws strong performances from her cast, especially Patinkin and Irving.  I think Irving was better as the poor Hadass, trained to be a respectable Jewish wife and finding a spark of desire for knowledge.  Patinkin at times was a little broad, but on the whole he played the idea that he would never have thought Anshel was a woman seriously.

It's a curious thing though that while Yentl saw how 'male privilege' works by being on both sides of the gender divide, she never comments on it or even appears to try and exercise that privilege.

There are some good things in Yentl to make it a strong directorial debut, but at times it does seem a touch self-indulgent, particularly in Streisand's parsimonious hold on being the sole singer.  To answer her question, yes, Papa could hear her...because she was the only one singing.