The Gorgeous Hussy is going to be among the oddities of Joan Crawford's career in that is was a rare venture into costume pictures.  Crawford was best known for contemporary films, as she was known as the epitome of the 1920's 'flapper'.  As such, seeing her in all these hoops and pantalettes might not have been a good fit, no pun intended.  What could have been a breakthrough for Crawford instead turned into a slight embarrassment, where she was gorgeous but hardly a hussy.

Margaret 'Peggy' O'Neill (Crawford) is the daughter of a respected Washington, D.C. innkeeper.  Politically aware and astute, she becomes an object of fascination and lust by the various politicos and wanderers to Major O'Neill's inn.  Among them are rakish sailor 'Bow' Timberlake (Robert Taylor) and John Eaton (Franchot Tone), a Senator.  However, Peggy has her heart set on two men: one romantically, one spiritually.  Her great love is another Senator, John Randolph (Melvyn Douglas), and her political soulmate is yet another Senator, Andrew Jackson (Lionel Barrymore).

Randolph thinks Peggy is too immature and young to marry, despite her protests of love.  She soon falls, perhaps reluctantly, for Timberlake, and accepts his marriage proposal.  Her dear 'Uncle Andy' and 'Aunt Rachel' (Beulah Bondi) are shocked to hear gallivanting going on in her bedroom, until Timberlake shows their marriage license.  Actually, the idiot lost the license, but Jackson did not bring his reading glasses and pretends to read it.  Timberlake actually showed the Jacksons his newest orders for the Caribbean.

Peggy sadly learns that she is a widow, and now she throws herself into helping Uncle Andy become President.  She also keeps dreaming of Senator, now Russian Ambassador Randolph, who yearns for her too but cannot bring himself to seek her out.  One person who does seek her out is Eaton, who is also eager for Jackson to become President.

The 1828 campaign is a nasty one, dragging poor Rachel through the mud.  Rachel's divorce from her first husband had not technically been finalized when she married her beloved Jackson, so the Washington wives call her essentially a whore.  The fact that she's a pipe-smoking rustic woman does not help.

The Jackson campaign has managed to keep the most malicious press from 'Backwood Rachel', but she still learns about it on the eve of Jackson's win.  Heartbroken and humiliated, she dies, asking Peggy to take care of Andy.

By this time, the political divide between the Unionist Peggy and the Dixie-loving Randolph become too great for both and they reluctantly part ways.  Peggy becomes the unofficial First Lady, but despite her knowledge and grace the Washington wives don't care for 'Pothouse Peg', even after she marries the elegant Eaton, who becomes a Cabinet member.

Jackson, still carrying the anger of Rachel's treatment, sees Peggy as a wronged woman, one with whom he's willing to go to war with his own Cabinet over.  He has other pressures though, including a growing secession movement from the South.  Randolph finds himself caught up in this when he is approached to help ferment a revolution.  He refuses, and is promptly shot for it.  Peg rushes to a dying Randolph, escorted by a mutual friend, Rowdy Dow (James Stewart), a newspaper man.

Poor Peggy cannot catch a break: her going to the dying Randolph with a man not her husband sets tongues wagging, and Jackson is determined to stomp out this vitriol against our gorgeous hussy. A tense Cabinet meeting with them and their wives leads to Jackson demanding apologies for Mrs. Eaton, apologies they summarily refuse.  Jackson insists that it was he who asked Dow to accompany Peggy with Eaton's consent, but this will not protect any of their reputations.

Reluctantly, John and Peggy Eaton go off as a special envoy to Spain, where they can finally enjoy their love in this unofficial exile.

I think where The Gorgeous Hussy went wrong was in the casting of Crawford as our 'gorgeous hussy'.   It isn't that Crawford cannot act.  It is that she simply looks wrong trying to look younger than she was and as demure and innocent as Peggy was supposed to be.  She seems nervous on-screen, which is so out-of-character with both her persona and some of her  other performances.

It's as if she was put-off by all the costuming, and that unease seeped into her performance.

Sometimes, she looks genuinely angry and too strong to be this damsel in distress.  That could have worked to her advantage, such as when she has to stand up for herself against men who know less than she does in the political realm.  However, for the most part director Clarence Brown, who like Crawford was a pro, could not get her to convey that innocence or gentleness of this maligned female.

One particularly odd moment was when she was told that Bow had died.  On receiving news that her love was dead and that rather than the joyful reunion she expected she was now a widow, Crawford looked more angry than pained at hearing this news.  It wasn't an anger of the injustice of it all either, it was more of an irritated anger.

Crawford's performance in The Gorgeous Hussy was all wrong, sometimes comically so.  Ainsworth Morgan and Stephen Morehouse Avery's adaptation of Samuel Hopkins Adams' novel did not help.  "I'm not only too young for politics!  I'm too young to love too!" Peggy yells at Randolph at one point, and it's hard to make lines like those believable.

There were a few moments where Crawford and Brown showed they could do a few good things.  One nice moment was when Peggy silently kisses the door where Randolph is staying in, but for the most part Crawford looks out of place and ill at ease among the costumes and overwrought romance.

It wasn't as if any of the others did much better.  This was an early film for Stewart, and like Crawford, he looks uncomfortable and not convincing as Dow, among her court of suitors.  One really strange moment was when Peggy, Bow and Rowdy were on a hayride.  As Peggy and Bow were flirting, we see Rowdy glancing from behind playing his flute.  Few things look creepier and distracting, almost as if Stewart is trying to upstage them.

It was a small role, but I can see why so many women fell for Robert Taylor, the rakish but love-smitten Bow being a nice part, even if it was a bit overplayed.  Overplayed is how Louis Calhern was as Sunderland, Randolph's political enemy and killer.  The only thing he needed to do was twirl a mustache as he devours every scene he is in.

Tone was his usual formal man as the upstanding Randolph.  He did, however, have a good moment when he confronts his wife's accusers. "I demand proof of their accusations, and proof of their respectability", he thunders when he's told 'respectable ladies' have accused Mrs. Eaton of indecent behavior. 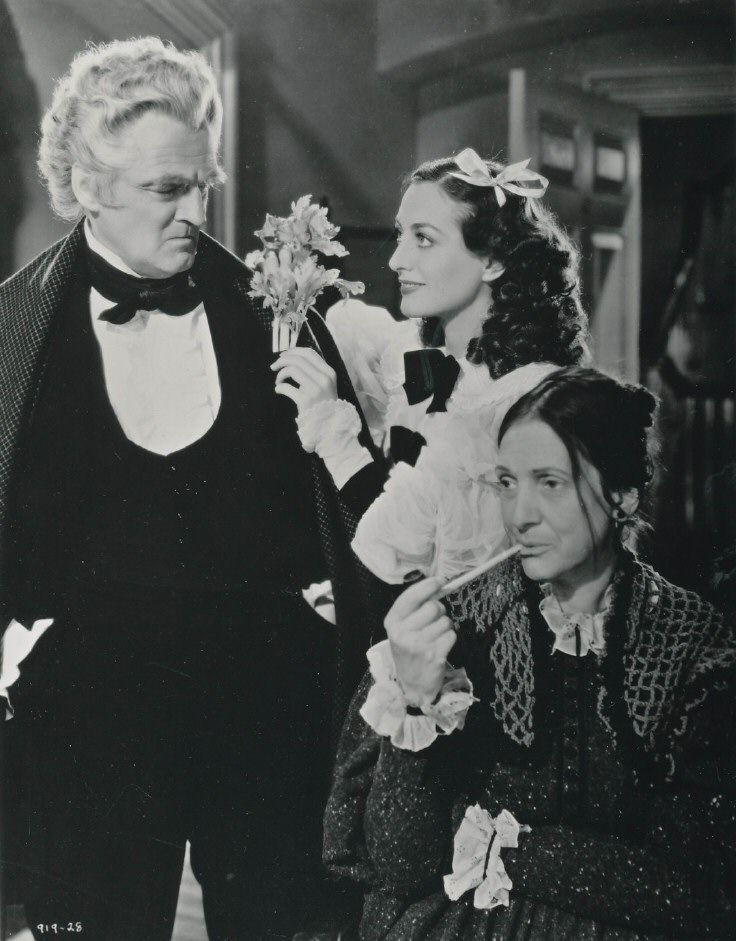 I thought Barrymore was a bit over-the-top as the hillbilly-like Jackson, but over time Jackson's crotchety nature got to me.  Barrymore, to his credit, could be pulled back: a scene at a church window he dedicated to his late wife was very moving.  Bondi was the one who came out of The Gorgeous Hussy the best as Rachel Jackson.  She could play the more hillbilly-type mannerisms for gentle laughs than open mockery, but in the sadness she felt when she learns just how the public thinks of her, she is quite moving.

It's no surprise that Bondi earned the first of two Best Supporting Actress Oscar nominations for The Gorgeous Hussy, as her performance elevates the film tremendously.

The Gorgeous Hussy is a product of its time: the treatment of the African-American characters, such as there were, is highly problematic, and the 'Negro' choir singing hymns outside Master Randolph's window as he is dying is creepy.

Odd how 'creepy' keeps coming up again and again with regards to The Gorgeous Hussy.

The story of the 'Petticoat Affair' could make for an interesting feature film.  Hopefully we'll get one, for The Gorgeous Hussy, outside Bondi and those lovely frocks, has little that would make anyone's dander get up.