Young Man With a Horn: A Review 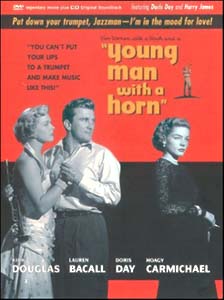 YOUNG MAN WITH A HORN

Young Man With a Horn is a thinly disguised biopic of Bix Biederbecke, a troubled jazz cornet player. Unlike Biederbecke, we get a happy ending.  We see some great performances, some very interesting subtext and all that jazz.

Willie Willoughby, better known as 'Smoke' (Hoagy Carmichael), tells us the story, both in voiceover and directly to the camera in the beginning and end.  Rick Martin had a troubled childhood: both parents dead by age 10, cared by a sister who wasn't that involved.  Rick began wandering away from school and life until he came upon a Rescue Mission and heard the piano.

Starting to play, he finds himself a bit of a prodigy, but it's when he hears the trumpet that Rick believes he's found his calling.  He soon starts being mentored by Art Hazzard (Juano Hernandez), a trumpeter who sees potential and trouble in Martin.

Rick (Kirk Douglas) soon starts showing his talent at various clubs and orchestras, but he also wants to play jazz 'his' way.  This method does not jive well with Jack Chandler's Dance Orchestra, which Chandler insists plays dance music in the same way for the audiences' benefit, not for artistic aspirations.  Rick's talent and genius attract Smoke and Jo Jordan (Doris Day), the band's singer, into being his friend.

After Rick does an impromptu jazz bit with other orchestra members, Rick's fired.  Jo, however, uses her influence to get him into another band, one that welcomes a trumpet soloist if he can rein himself in, which he does.  Jo also introduces Rick to one of her best friends, Amy Woods (Lauren Bacall), a beautiful, somewhat haughty and mysterious woman.  Rick is instantly taken with Amy, but there's something about Amy that we can't peg.

Jo warns Rick that Amy is "a strange girl", who is "all mixed-up inside", but it's too late: they've married.  Amy wants Rick to be more refined and high-class, not mix so much with juke joints and people like Art Hazzard, who is still playing though not at the strength he used to.  Rick soon struggles between his love for Amy and his love for the trumpet, whom Amy calls his 'alter ego'.

Eventually, things give way, especially since we get the strong suggestion that Amy may have designs on her fellow female student.  The end of his marriage sends Rick on a downward spiral where even his trumpet fails him.  A bout with alcoholism and depression wreck him more, along with guilt about how he dismissed Art before his death in a car accident.

Ultimately though, with the love and support of Smoke and Jo, Rick returns to be a better human than trumpet player.

Young Man With a Horn is a surprise in many ways.  First, it comes from director Michael Curtiz, perhaps the most underappreciated director in history.  The man could direct everything from romantic melodrama like Casablanca to lavish musicals like Yankee Doodle Dandy to action films like The Adventures of Robin Hood to horror films like Mystery of the Wax Museum to strong dramas like this.

As such, Curtiz brings certain elements that showed subtext.  One involves mirrors.  Almost every time we see Amy, we see her reflected in a mirror, as if Curtiz is suggesting that she is presenting an image, not the real person or even if she is real herself.

Another is the 'lesbian' bit.  There is no overt mention that Amy is lesbian or even bisexual, but there is again enough subtext to let audiences fill in the idea if they wish to see it.  There is Jo's declarations of how Amy is 'strange' and 'all mixed-up inside'.  There's Amy's own affection for her other female friend, and a very telling bit of dialogue from Carl Foreman and Edward H. North, when Amy comments on how simple Jo's life is because she knows 'which door (she's going) to walk through'.

One can read that line as saying Amy envies Jo's straightforward life, but it could also mean that Jo, unlike Amy, goes only one way sexually versus Amy's 'confused' manner.

Another aspect that separates Young Man With a Horn from other films is the positive portrayal of African-Americans in the film. Art Hazzard is a mentor to Rick, almost a father figure. There is no suggestion that Rick thinks himself superior, and when Amy seems about to suggest something racist against Art, Rick flies into a rage.

One can quibble whether Hernandez's somewhat noble and patient Art is a step forward for African-Americans on screen or an early indication of the 'Magical Negro', though I would say it isn't since Art does not resolve anything for Rick.

One surprise in the acting department is Carmichael, known better as a songwriter who wrote such hits as Stardust and Georgia on My Mind. Carmichael carved a good career as a supporting actor in film, usually playing a jaded or cynical musician, though not as jokey as say an Oscar Levant.  Carmichael holds his own against the cast as the guide to our story, bringing a world-weariness yet compassionate nature to Smoke.

Interestingly, Carmichael knew Beiderbecke, the inspiration for Young Man With a Horn.  His friendship with the real 'young man with a horn' and his own musical experience more than likely informed Carmichael's performance.

Granted, I wasn't thrilled with the voiceover or having Smoke speak directly to us at the beginning and end, but one can't have everything.

Douglas managed to keep that volcanic over-acting that sometimes plagues his performances and makes Rick a talented man too in love with music to care for anything else only to get hurt when he slips for Amy.  He isn't raging like he is in other films that at times make his characters come across as hysterical or crazed, but here he seems genuine and at times rational.

Bacall keeps to being a cool to cold customer, one who is forever seeking and never satisfied.  She is almost sympathetic in her snobbery and yet obscure in her true self.  Day seems a little ill-at-ease in this drama, a bit unsteady.  However, as Young Man With a Horn was not just her fourth film overall but her first straight drama far from the more frothy musicals or comedies she started out with, Day acquitted herself quite well.  She shined when she sang, but she also showed her potential as a dramatic actress, which she would develop further.

Day was also fortunate to team up again with Curtiz in their third collaboration.  Having guided Day in musicals and comedies, she benefited from his expertise in this drama.

An element not mentioned often enough is trumpeter Harry James, who played the music, showcasing his versatility and why he was popular in the big band era.

Young Man With a Horn has the positives of strong performances, an interesting story and some wonderful music.  Perhaps the voiceover and direct narration, along with the happy-type ending may not be completely believable, but on the whole a worthy picture.