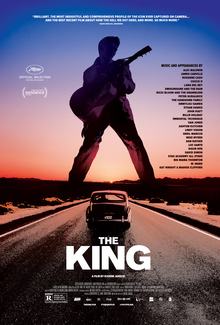 Elvis is a secular icon, a figure that looms large over America.  Even if you are not a fan of Elvis Presley, you know the name, you know the figure, you know the music, the home, even the peanut butter and banana sandwiches.  Exactly what the documentary The King is trying to prove is a bit opaque.  Part biopic, part exploration of America, I think The King wants to show that Presley reflects what America is and how we ended up with President Donald Trump.  I don't think it's as clear a straight line from one to the other, but there are some wonderful and interesting moments within The King that makes it worth seeking out.

Writer/director Eugene Jarecki serves as our guide and narrator on this long, strange trip.  Using a Rolls-Royce that Presley once owned, Jarecki and his crew travel all over the country and to Germany, on each stop covering an aspect of Presley's life; there is his early days in Tupelo, Mississippi, his move to the larger city of Memphis, then New York, Presley's stint in the Army stationed in Germany, and then on to Hollywood and Las Vegas.

On the way, the Rolls-Royce breaks down a few times, events The King chronicles.  We also get to see people both famous and unknown ride along, everyone from Ethan Hawke (who is also an executive producer on The King), to Alec Baldwin and Ashton Kutcher.  We get sit-down interviews with members of Elvis' entourage as well as others such as Chuck D., who disparaged Presley in Public Enemy's Fight the Power, political commentators such as Van Jones and James Carville, and authors who have covered Presley's impact in various fields.

In between we get backseat performances from such acts as child bluegrass prodigy Emi Sunshine and the Rain and M. Ward. 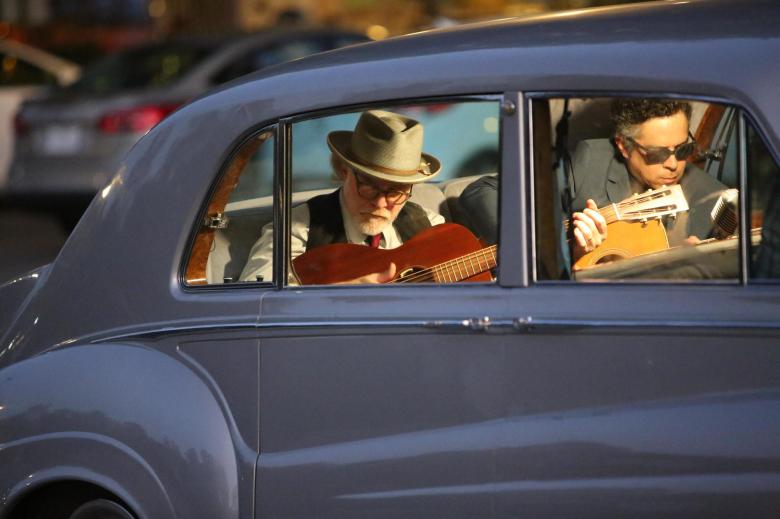 The King is interesting in some aspects, as meandering as the road in others.  I think Jarecki wants to ask 'What is Elvis?' versus 'Who is Elvis?' and make Presley the avatar for his own visions of America now.  Somehow, Elvis Presley led to Donald Trump.

I think Jarecki wants to make that case by suggesting that Elvis became more than just a singer who became too famous, but a symbol of America itself good and bad (mostly bad).  The 'cultural appropriation' from Presley, the faux patriotism and military posturing, the gaudy spectacle of Presley's Vegas years all somehow mirrored America, and from that sprang the 45th President, who until achieving office was best known as a celebrity, down to his own reality show.

I think at times it is far too much to chew, and Jarecki at times seems almost disappointed when people don't react the way he'd like them to.  For example, while interviewing Chuck D., he seems almost aghast that this black man famous for trashing Presley doesn't see Presley taking 'black music' and using it to enrich himself.  Chuck D. comments that 'culture is culture', and it wouldn't be 'cultural appropriation' if a there was a black classical pianist just because that pianist wasn't of European extraction.

One almost senses Jarecki deflate, but to his credit he does allow other commentators to point out that Elvis took from the gospel and blues tradition, but he also took from Bill Monroe, who was white. Just as Presley re-recorded Hound Dog, originally written for black R&B singer Big Mama Thornton, Presley also re-recorded Blue Moon of Kentucky, a major bluegrass anthem.

A case for 'cultural appropriation' is further weakened when you consider that Hound Dog was written by two white Jewish songwriters and that Presley's poor background was closer to the African-American experience than his white counterparts. 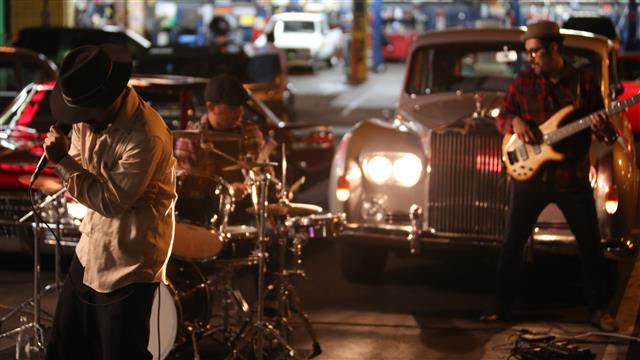 Sometimes Jarecki allows for the case that Elvis reflects and/or predicts America now quite well.  Kutcher, for instance, makes a point that his own fame compared to his accomplishments and talent are wildly out of proportion. Elvis might have become too big for who he was.

Other times, you wonder if Jarecki is a little bit bonkers.  His insistence that Presley's fame and influence on the culture somehow brought about a declining America with a false 'American dream' and a particular President seem to come from another world.  I leave it to you to decide whether Alec Baldwin confidently predicting that Trump would not win the election is funny or sad, but it might have been unnecessary.

Seeing the occasional work the Rolls-Royce needed on the road too was probably a touch too much in a film that could have done with trimming its running time.  Even having Jones berate Presley posthumously for not becoming more politically active seems eccentric.

The King at times slides in peculiar ways, such as the Mike Myers interview where you wonder why Jarecki opted to open it the way he did.  It would have been nice to have heard more from Emmylou Harris or maybe someone whose views don't match Jarecki's. However, as an unfinished portrait of Elvis Presley, along with some fascinating historic footage of both Presley and his world and some great musical performances (I'm becoming an Emi Sunshine fan), The King is a decent primer into this most extraordinary of icons.