The Iron Petticoat: A Review 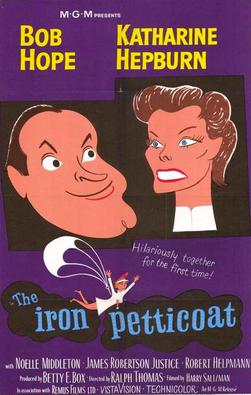 Few doubt Katharine Hepburn was one of our greatest actresses, but could she really do comedy?  The only real comedy I can think of where Kate was brilliant was Bringing Up Baby, her fluttery scatterbrained heiress a delight.  If you ask about a couple of others, I'd argue that as good as The Philadelphia Story is, she was playing a variation of her screen persona: the WASP patrician, and in The African Queen she was spoofing said persona.

The Iron Petticoat, as such, seems such an anomaly in Hepburn's career, and one she did not look back on fondly.  Neither did her costar, Bob Hope, who was so embarrassed by it all that he essentially pulled The Iron Petticoat out of circulation in the United States until after his death.  Curiously, a truncated version was available for years in Europe. Now, at last, The Iron Petticoat is finally available in America.  It's a curiosity and a hiccup to both Hope and Hepburn's careers, but as a movie, it's a horrible mess.

Soviet aviatrix Vinka Kovelenko (Hepburn) flies into the American sector of West Germany.  She isn't, however, asking for asylum.  Rather, she leaves because she is furious that an inferior flyer was promoted over her because he was a man.

The Air Force Colonel assigns Captain Charles 'Chuck' Lockwood (Hope), who had grounded her as she sped across Germany, to win Kovelenko over to the joys of capitalism.  Lockwood at first is dismayed to find himself in this situation, as he hoped to pop over to London and quickly marry titled heiress Lady Constance Warburton-Watts (Noelle Middleton) and get his hands on her fortune.

However, he gets an unexpected break when Vinka wants to convert him to the joys of Communism.
Using the excuse that a trip to London will enlighten her to his superiors and allow her to educate him to her, Lockwood manages to get to London.  He signs the marriage license and now only waits for Lady Constance.

There are, however, complications.  The Soviets want their flier back, convinced she is a traitor who will give valuable information to the Americans.  Lady Constance also makes things hard, becoming jealous of our Ruskie.  Then there's Ivan Kropotkin (Robert Helpmann), Vinka's old wimpy flame who still pines for her.  He's been brought to London to entice our Red Star back to Mother Russia.

Somehow, Lady Constance gets the idea that Vinka and Chuck are lovers.  It gets worse when Lady Constance finds out Lockwood has no money, belying the claim that he was well-off.  Vinka, for reasons unclear, soon appears to fall in love with Chuck and begins to become more glamorous.  Chuck for his part is trying to keep all the balls in the air.

Things come to a head when the Russians accidentally kidnap Lady Constance thinking she was Vinka, they drug the Colonel, and the Americans think Lockwood has become a Communist.  Vinka, heartbroken at Lockwood's multiple deceptions, goes back to the Soviet mission and is astonished to find herself charged with treason to 'meet her American lover'.

Chuck attempts to rescue Vinka but gets captured and sent away himself.  Vinka accepts her fate but is enraged to find the pilot who replaced her is the one taking them all back.  Eventually, Lockwood's second rescue attempt also fails, but when they land in Moscow, it's her handlers who are arrested thanks to a shift in government.  Vinka and Lockwood are welcomed as a Romeo & Juliet-type to bring East and West together.  Vinka happily agrees to marry in Omaha and declines $100,000 bonus she had been carrying around thinking it was fake.  Lockwood takes it behind her back.

As much as Hepburn may have dressed herself up as the victim, I find that she is primarily responsible for the disaster that is The Iron Petticoat.  It's possible that the original script was much wittier, especially given that The Iron Petticoat draws heavily from Ninotchka to where it comes across almost as an 'homage' if not straight-up remake.

However, the film that we have now makes clear that The Iron Petticoat was going to cater more to Hope's brand of rapid-fire quipping than anything else.  Even with that, I think Hepburn could have worked with or at least around that.  However, the film has one of her worst performances, a cringing embarrassing debacle that she should bear responsibility for.

When you look at her three great comedies (or at least the ones I have seen and know she's good at): Bringing Up Baby, The Philadelphia Story and The African Queen, you see her directors are Howard Hawks, George Cukor and John Huston.  Each of them is a master craftsman who drew the best out of Hepburn.  You don't normally find Ralph Thomas listed among those Great Directors.

I think it is because Thomas did not see what Hawks, Cukor and Huston did: that for Katharine Hepburn to do good comedy, she has to underplay it.  In each of her great comedies she is never broad or over-the-top.  In The Iron Petticoat, she does what Hawks would not let her: she tries too hard to force the comedy, as if she knows we're supposed to laugh.  Rather than let the comedy come from the situation or her character's reactions, Hepburn decided she has to push the comedy.

At the top of Hepburn's sins is her accent.  It quickly becomes comical, but not in a good way.  Her efforts at sounding foreign while still keeping her clipped New England tone is just sad.  Moreover, at times she doesn't seem to know what accent she is using.  In one scene, Lockwood refers to her as 'Baby'.

"Why do you call me, 'baby'?" she asks in what sounds more like a French accent than a Russian accent.

The accent problem only highlights Hepburn's bigger problem: her performance.  Again, she is so broad and forced in the comedy, never coming across as vaguely human but as a caricature.  You cannot watch Hepburn in The Iron Petticoat without thinking that her broadness sinks the film.

Hope is not stretching as Lockwood, and Hepburn is correct, up to a point, about the film being 'a Hope movie'.  There are even sidelines to his faux-nemesis: during a fight someone calls him 'Dog-Nose', to which Lockwood replies, "Oh, you got a little Crosby blood in you, do you?"  This is a mistake given that we don't need reminding of the Hope-Crosby teaming.

There is no chemistry between Hope and Hepburn, nor with Hope and Middleton.  Lockwood does not come across as a romantic character or the more typical 'Bob Hope' character.  Instead, in his deceptions to all, he comes across as a duplicitous lead whom both Vinka and Lady Constance should dump versus the lovable coward that Hope perfected.

Hope's line about female officers, even for 1956, is cringe-inducing and horribly sexist.  "Women in uniform bother me.  I don't know whether to kiss them or salute them".  That was bad.

Everything about The Iron Petticoat is either dumbed-down or idiotic.  Vinka being in love with either Lockwood or Kropotkin is ridiculous.  The harebrained scheme to abduct Vinka is silly and not in a good way.  The heavily-accented Southern U.S. Senator has no purpose, though he has one of the few good lines in the film.

When overhearing Lockwood telling Kropotkin that Vinka has convinced him to join the Russians, Senator Howley (Alexander Gauge) tells the Americans overhearing with him, "Even McCarthy wouldn't believe this!".   Middleton's quip about Vinka being 'The Barefoot Laundress' is also funny.

In Ninotchka, we know how our dour Soviet agent fell for the charms of Paris and a Parisian man.  In The Iron Petticoat, the transformation, like the film, makes no sense.  It's an interesting study of actors out of their element trying and failing, but apart from the amusement one can get out of seeing Katharine Hepburn coming across as awful there isn't much to recommend in The Iron Petticoat.

We are all grateful the Cold War is over.

Email ThisBlogThis!Share to TwitterShare to FacebookShare to Pinterest
Labels: Blogathon, Comedies, Review, Summer Under the Stars