This Can't Be Love: The Television Movie Review 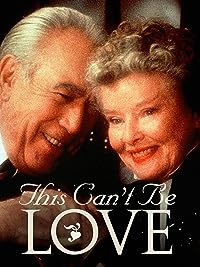 THIS CAN'T BE LOVE

Is it a good thing or a bad thing when two actors, in their declining years, appear together for their first collaboration?  Is it a joining of two great thespians, or self-parody to the point of pain? This Can't Be Love teams up two-time Academy Award winner Anthony Quinn with four-time Academy Award winner Katharine Hepburn. There's a certain delight in seeing two legends not only essential play themselves but almost spoof themselves, but at time This Can't Be Love seems less about them and more about the younger set involved in their winter love.

Marion Bennett (Hepburn) is a grand dame of the screen, essentially retired and living out her years painting, gardening and commenting on how the world would be better if everyone did as she thought.  She drivers her driver Grant Landis (Jason Bateman) if not bonkers at least to puzzlement at times with her quirks, such as the idea that not waking up by six a.m. means 'half the day is gone'.

In turns fascinated and exasperated, he gleefully goes along with Madame Bennett's views.  One day, they spot a woman following them around.  Marion dismisses her as 'a fan', but despite this she gladly invites this woman, Sarah Wells (Jami Gertz) for dinner when she brings Grant the ice cream she had 'mistakenly' taken from him.  Sarah has an almost encyclopedic knowledge of Marion's life and career: she recognizes both George Cukor and 'Michael Reyman', an actor Bennett worked with.  Marion does not appear to have fond memories of Michael, but thinks nothing of the whole thing.

That is until Michael Reyman (Quinn) suddenly shows up.  In truth, Sarah says she's Michael's granddaughter, and they've cooked up a scheme to have Michael and Marion reunite.  Into their web they get Grant to help 'Cupid fire his final arrow', as Michael says. It is discovered that Michael and Marion were secretly married for five days, which resulted in not just a miscarriage but also in bitter recriminations.

It appears that Michael wants a chance to reunite with Marion, but then things take a turn. Marion, on the cusp of being wooed, finds Living on the Roller Coaster, Michael's memoirs.  His memoirs involve their relationship, and the private Marion is incensed.

Her anger puts a dent on the Grant and Sarah romance, which has its own blow when it's revealed that Sarah isn't really Michael's granddaughter, but his literary agent.  No one will publish this faded star's book without the juicy details, and after their brief encounter Michael is now reluctant to publish.  Marion gets herself arrested for stealing a horse and carriage, Michael ends up in the hospital for trying to show he is still the man he once was, and Grant is offered a teaching position in Arizona.

Ultimately, both pairs of lovers reconcile: Michael hands over the only copy of his book to Marion, who burns it, and Sarah leaves her job while Grant opts to stay with Miss Bennett.  Marion goes to the train station to find Michael, convinced that instead of asking 'Why?', she should ask 'Why not?' 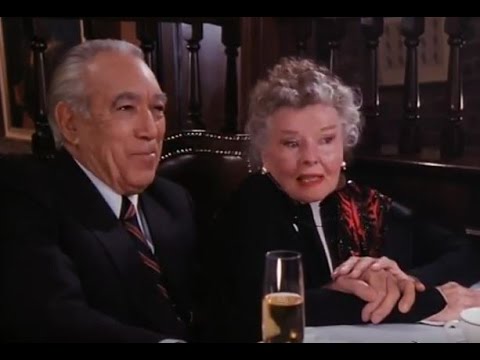 The surprise is that he could not get Hepburn or Quinn to go beyond playing themselves.  Despite the names, the two leads might just have well been called by their right names.

This Can't Be Love was announced as Hepburn's final performance, but she ended up making two more projects, another TV movie and Love Affair with Warren Beatty. Not having seen that film or One Christmas, I cannot say how they compare to this, but This Can't Be Love does nothing to stretch Hepburn.

It does give her a chance to play up her image as a cantankerous legend and to issue a few wisecracks. When a fan asks for an autograph at an art gallery, she dismisses the request as idiocy. "Of what possible use could my name on a piece of paper be to you?", she casually states in her clipped New England tone.  "It's a hobby," the man helpfully replies.  "Collect stamps," she whispers and shakes her head.

Watching the film, you think Hepburn is not so much even sending up her own image but just being herself with a thin veneer of acting.

The same goes for Quinn, who is boisterous as Michael Reyman.  Perhaps writer Duane Poole realized that 'Rey-man' could be a bit of a pun, since 'Rey' is Spanish for 'King' and Quinn is Hispanic.  Perhaps that is also giving Poole far too much credit.

Quinn seems to almost delight in vamping it up as this exuberant swashbuckler, even though in the opening montage we see only 'Marion Bennett's' past triumphs.

Oddly, Harvey made some very odd choices.  For example, he shot Quinn and Hepburn in medium shots even when they were supposed to be in the same room, almost as if they were acting apart and speaking to someone off-stage.  With Gertz and Bateman, they were shot together.  It does seem strange that when you get two respected stars of the 'Golden Age' to work together, you spend little time having them literally share the screen.

Gertz and Bateman work well together, though the twist of Sarah not being Michael's granddaughter was unnecessary.  Bateman made Grant believable as this eager but naive figure and not a cliched imbecile.  Oddly, the opening scene where Marion storms into his room at six in the morning to find him only in boxer shorts shows that he was rather fit.

One wonders why Reyman and Sarah had to go through all these hoops when perhaps a simpler love story would have worked.  One also rolls their eyes at the cliched and hackneyed idea that Marion would come across Living on the Roller Coaster so quickly.

Despite all this, This Can't Be Love has a bit of charm.  It allows Hepburn to roll out some great quips (example: when Reyman says age is a state of mind, Marion retorts, "I live in an old state, one of the original 13 colonies").  It gives a chance for Bateman to play the innocent and Gertz, while not the strongest, at least able to keep up.

Not on the level of either Hepburn or Quinn's best work, This Can't Be Love is decent if a bit trite, and I can't fault it for not stretching when it never intended to. Besides, how often will you see Katherine Hepburn have a heart-to-heart with a horse or Anthony Quinn leaping onto a coffee-table swinging a sword?

Email ThisBlogThis!Share to TwitterShare to FacebookShare to Pinterest
Labels: Blogathon, Summer Under the Stars, Television Specials