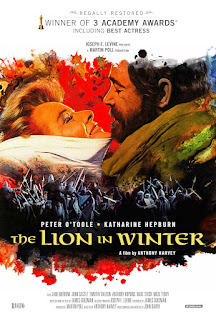 THE LION IN WINTER

Peter O'Toole once said that he could make a career out of playing Henry II. He had done so already on film in Becket and would in essence pick up where he left off in The Lion in Winter. This tale of the machinations of succession is a towering achievement, with magnificent performances and a gripping if long tale.

Henry II (O'Toole) is still vigorous but knows that he will die. He favors his youngest son John (Nigel Terry) to succeed him, his fatherly love mostly blinding him to John's idiocy and weakness. His oldest living son Richard (Anthony Hopkins) has a champion in his imprisoned mother Eleanor of Aquitaine (Katherine Hepburn), though their relationship is frayed. No one considers the middle son Geoffrey (John Castle), though at their peril due to his plotting mind.

Henry allows Eleanor out of her imprisonment for Christmas court, and all their sons will be in attendance too. A Christmas Court guest is Philip II (Timothy Dalton), the young King of France, whose sister Alais (Jane Merrow) is betrothed to one of Henry's sons to be determined later. She is also Henry's current mistress. On this dark Christmas Eve, the various royals plot and counterplot over the succession. Henry, enraged that he cannot get his way and finding all his sons lacking, decides to dump Eleanor via annulment, disinherit his treacherous sons and marry Alais to father real sons.

For once though, this scheme is too much for both Eleanor and Alais, and while the succession itself is not settled, the tempestuous Henry and Eleanor manage to hold on to yet another day, delighting in their cold war. 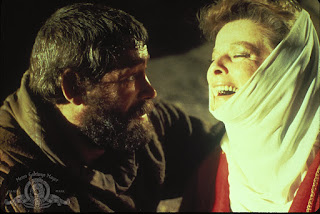 What The Lion in Winter manages is to make words more cutting than swords. Seeing these noble figures tear at each other with sharp remarks and careful plotting makes for almost fiendishly delicious viewing. James Goldman's adaptation of his play gives the actors strong, fierce dialogue with which to wield at each other. Some of the monologues are extraordinary.

Of particular note is when Hepburn declares that war does not come from outside forces such as religion but from within themselves. It gives her a chance for a bravura performance, one where Eleanor is filled with equal parts rage and regret. She loves Henry, perhaps even her own children despite her protests to the contrary. However, she also knows what vipers they are.

Director Anthony Harvey draws excellent performances from the whole cast. Hepburn, the only American in the cast, is fierce as Eleanor, able to show affection and duplicity with equal ease. She tears at Henry for his plots, but you also see the deeply hurt woman when he plans to cast her aside or taunting her with freedom in exchange for her ducal lands.

Peter O'Toole is more than her equal, his Henry a man filled with rage but a powerful lust for life. He too shows vulnerability when he sees how hated he is by his sons, at point declaring "all my sons are bastards". It is when Eleanor more than suggests that she had been his father Geoffrey's mistress (and she delighted in Geoffrey's body) that we see that this fierce, proud, arrogant man can be reduced to a weak one. 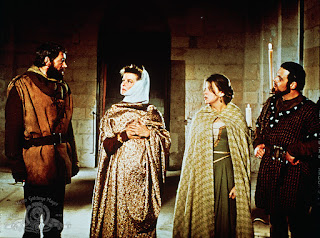 Each of the royal sons is a standout. Anthony Hopkins in an early role makes Richard both a warrior prince and a hurt ex-lover to Philip. Whether Richard is more hurt by his "outing" or Philip insisting their affair was not genuine love we cannot tell. Terry's dimwit John is appropriately pathetic and silly, forever flailing about being king when he appears unable to form a thought. Castle as Geoffrey does not have as showy a role as the others, but in his quiet and still manner he shows the dangers the middle son poses.

As Alais, Merrow uses subtlety to communicate her delicate position. She loves Henry but detests how she in her own words is the only pawn in this game of kings, queens and knights. She brings a gentleness to Alais but also an awareness that the old monarch does not have. She, like Eleanor, knows that Henry's mad plan to annul his marriage and father sons through Alais will put her and whatever child she has in danger. She knows it is dangerous, and that there is no logic to it all. However, like the pawn that she is, Alais is powerless. Not even her half-brother Philip can help her.

Dalton uses his youth and soft voice to great effect, making Philip less of a master of plots that Henry is, though as Henry observes, not bad for a beginner.

The Lion in Winter is enhanced by Douglas Slocombe's cinematography and the art direction, which gives the film an almost "you-are-there" look. The various castle corridors feel lived in, as if it were less film and almost documentary. John Barry creates a masterful score, evoking the medieval era and being appropriately grand and intimate when necessary.

The Lion in Winter is a true game of thrones, showcasing actors at the top of their game and delivering a strong, sharp script. You do not feel the film's length though it is a long film. "What family does not have its ups and downs?", Eleanor observes to herself. In The Lion in Winter, we see that the Plantagenets were a really screwed up family, but it makes for fascinating viewing.