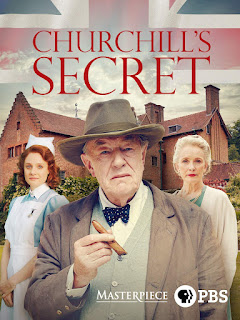 Sir Winston Churchill once wrote that history would remember him kindly, for he intended to write it. Few Britons have been as, if not beloved at least as remarked and remarkable as Churchill. When was the last time biopics have been made about Edward Heath? Churchill's Secret chronicles a time when the Twentieth Century Lion in Winter almost came to an end.  With strong performances and more focus on his family life, Churchill's Secret does not deify or demonize this historic titan.

Nurse Millie Appleyard (Romola Garai) is somewhat reluctantly preparing for her move to Australia where her fiancée has gone on ahead of her. She then finds herself called to serve in the most secret treatment of a mystery patient. That patient: Prime Minister Winston Churchill (Michael Gambon), who has suffered a pair of strokes, the second an especially critical one.

The Prime Minister is spirited away to Chartwell, his private country home at the insistence of Winston's wife Clementine (Lindsay Duncan). The Conservative Party leadership wants to keep Churchill's condition as secret as possible, fearing that news of an ill, possibly dying Prime Minister will bring down the government. Churchill's likely successor Antony Eden is himself recovering from surgery and there is no one to take Churchill's place.

While Nurse Appleyard, no supporter of Churchill, does her duty to care for her patient, she warms to the curmudgeonly Prime Minister. She also observes the dynamics of Winston's families political and blood. Some Conservatives would be happy to see Winston quickly retire, some are fiercely loyal. The Churchill children: son Randolph (Matthew Macfayden) and daughters Diana (Tara Fitzgerald), Sarah (Rachael Stirling) and Mary (Daisy Lewis) in turns bicker with and love each other and their parents.

Will Sir Winston recover to lead his nation once more? Will Nurse Appleyard opt to follow the loving sacrifice of her own career for that of her fiancée's or will she forge her own life in Churchill's Britain? 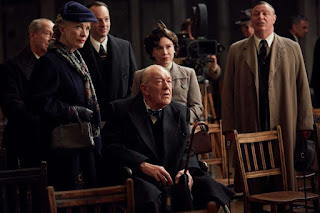 Churchill's Secret has the benefit of some exceptional performances. Gambon, I think, did well in opting not to try to sound much if anything like Sir Winston. Instead, he focused on Churchill the man: one weakened by health but also determined to return. One is moved when seeing this volcanic figure stumble and mumble I'm Forever Blowing Bubbles in an almost childlike manner.

Duncan is his equal if not superior as his beloved Clemmie. We see the mix of support and irritation at having to deal with being The Great Man's Spouse. She wants him to retire, to have the few remaining years to herself. She also knows in her heart that retirement will metaphorically if not literally kill him. As she struggles with that delicate balance of support and independence, she also has to deal with their children and their various failings.

The interplay between her and Gambon show the complex yet totally loving couple Winston and Clementine were. The scene where Clementine finally speaks of the death of her daughter as Winston secretly overhears her conversation with Appleyard is heartbreaking, the buried pain finally exposed. Both Duncan and Gambon deliver exceptional performances.

Macfayden is a true actor who sadly has never been the star his talent should have made him. His take on Randolph from the moment he first appears makes one wonder why Randolph's story has not been made. He is in equal turns filled with rage and regret about his tumultuous relationship with his father. He is unpleasant from the start: blunt to the point of rudeness, almost cheering at the thought of his father dying. Yet behind this there is a deeply hurt man, forever haunted by his inability to live up to his father's image or expectations, the bitter man who numbs his pain with alcohol. 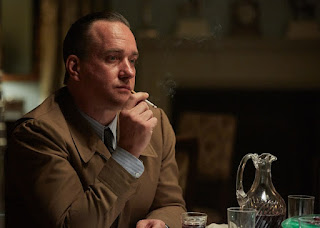 While Macfayden is on screen for a relatively short time in Churchill's Secret, he makes the most of his screentime, dominating his scenes with a blend of fury and lament at the state of his life. The best scenes in Churchill's Secret are not those of the various machinations over possible succession or news suppression. Rather, they are when the Churchill family has an unofficial wake for their legendary husband and father. The Churchills come across as a genuine if highly dysfunctional family: one moment joyfully giggling with each other, the other viciously snapping at each other.

Garai is not left out as the fictional Nurse Appleyard. While her story about whether to stay or go is a bit lost in the shuffle, she too does excellent work as the nurse who sees the man behind the legend, flaws and virtues. It was a wise decision to not make her a Conservative supporter, which allows for another viewpoint. She does her job as a nurse, but she also sees how people gather around an old man for reasons benevolent and self-serving.

Churchill's Secret allows for seeing the human behind the legend. Strong acting all around move the story along well, and on the whole, it does humanize this massive figure.