The Last King of Scotland: A Review 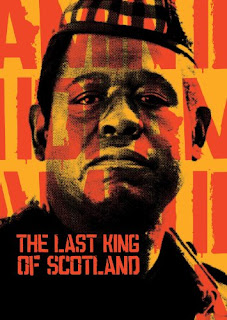 THE LAST KING OF SCOTLAND
Can one make a film where the villain is almost sympathetic, while the protagonist is almost monstrous? The Last King of Scotland manages to do exactly that. The film can rightly claim to be Oscar-winning, but I am not convinced people remember it or its subject.
Scottish doctor Nicholas Garrigan (James McAvoy) finds the prospect of being partners with his doctor father depressing. Looking for adventure and escape, he settles on Uganda to start his medical career.
He starts working with Dr. Merrit (Adam Kotz) and his luscious wife Sarah (Gillian Anderson). Nicholas can easily tempt Sarah, but she resists halfheartedly. Uganda is in the throes of a coup d'état, and Nicholas finds the whole prospect exciting. He sees the new President, Idi Amin (Forest Whitaker) and Nicholas thinks Amin may be a good guy.
That joy grows when he and Amin meet, and he finds that the General loves Scotland and all things Scottish. Now as Amin's personal physician, Nicholas finds himself in a life of luxury, even having an affair with Kay (Kerry Washington), one of Amin's wives. However, the shadowy British diplomat Stone (Simon McBurney) and Amin's former physician Dr. Junju (David Oyelowo) give Nicholas hints that Amin is not a good man.
Nicholas does not take the hint, and he finds himself immersed in Amin's paranoia and terror. He also finds that Kay is not safe now that Nicholas knocked her up. Things culminate when the PLO hijacks an Air France flight that lands at Entebbe. Here, Amin soaks up the limelight while simultaneously torturing Garrigan for his betrayal. Ironically, Garrigan is able to escape Uganda thanks to Amin, whose release of non-Israeli hostages lets Garrigan mingle among the other white people. 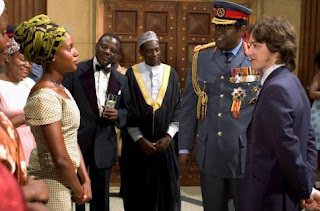 The Last King of Scotland won Forest Whitaker a Best Actor Oscar for his portrayal of Amin, the film's sole Academy Award nomination. It is rare when a film wins a major Academy Award when it is the only nomination it has, and Whitaker is exceptional in the role. He switches easily from Amin's joie de vivre to his unhinged fury. Many times, Whitaker can shift from Amin raging about accusations of cannibalism to laughing at the prospect of showing his cleverness to the world.
There are, however, two issues with Whitaker in The Last King of Scotland. First, I think Amin is a supporting character, so his winning in Lead versus Supporting strikes me as a bit of category fraud. The bulk of the film, indeed the entire story, does not revolve around Amin but on Garrigan. As such, it seems that McAvoy was the lead, Whitaker the secondary.
Almost everything around The Last King of Scotland revolves around McAvoy's Garrigan to where the title could be more about him than Amin. I grant that McAvoy is an attractive man and gets his obligatory shirtless scene, but even for a film based on a fictional novel there seems something almost comical about how Garrigan is sexual catnip to every woman he meets.
As the film really is around him, I think director Kevin Macdonald wanted the viewer to see the growing horror of Amin's reign of terror through an innocent's eyes. That was difficult enough given that Garrigan was no innocent but almost arrogant in his manner to where when Amin has him hanging on hooks, we root for Garrigan to die. It gets worse when Macdonald is adamant about zooming in and out various shots within the same scene. He also moves the camera all over the place, disorienting the viewer, making things pointlessly artsy and confusing.

Second and perhaps more concerning, The Last King of Scotland seems almost sympathetic to Amin. I was surprised at how Amin was shown not as a tyrant but as almost more eccentric to slightly bonkers than cold and calculating. He was irrational at times such as when he berates Garrigan for not being supportive. "And you call yourself my closest advisor?" he scolds Garrigan, obviously shocked to have this title foisted on him when he never made such a claim.
Almost all of Amin's actions seem more misguided than malevolent. Sometimes they seem rational, a dangerous thing given that Amin was not the cartoonish buffoon the Western press caricatured him as. He could be oddball, but he was also cruel, murderous and tyrannical. His anger at an assassination attempt seems understandable even if The Last King of Scotland meant for Amin's violent retribution to those taken prisoner to be shocking. Even his literal butchering of Kay appears to be more the overreaction to a wife's betrayal than a small taste of Amin's evil.
Curiously, the Entebbe hostage situation seems more a plot device than a real story. I am puzzled as to why, despite the danger the hostages face, Amin seems willing to show them his own brutality so openly.
The Last King of Scotland might read better as the novel it is. As a film however, it went wrong in its portrayal of Idi Amin apart from Forest Whitaker's performance. I think two films that touch on both Amin himself and the Entebbe raid are better. For the former, there is the documentary General Idi Amin Dada: A Self Portrait, and for the latter, the 2018 film 7 Days in Entebbe (also known as Entebbe). Overall, it is not a good sign when your hero comes across as worse than a murderous dictator who destroyed his country.
DECISION: C-
Posted by Rick at 6:44 AM