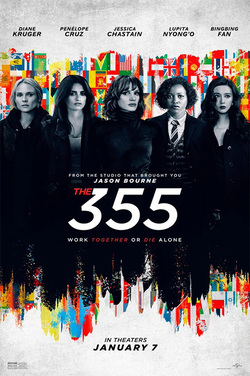 Here's the 411 on The 355: it is a sad waste of talent, where we see strong actresses (two Oscar winners and one nominee) slog their way through a jumbled, boring story that one hopes was not the beginnings of a hoped-for franchise.

What seems a routine albeit massive drug deal goes wildly wrong when international cyberterrorist Elijah Clarke (Jason Flemyng) tries to take a device that will not only hack but control any device in the world. Even the highest security level of governments can be taken over by this decryption device. In the chaos of the Columbian anti-drug police raid, however, the device is picked up by Agent Luis Rojas (Edgar Ramirez).

While he does not know what exactly it is, he knows he is in danger. Wanting some profit, he offers it to the CIA, which sends agents and secret lovers Mason "Mace" Brown (Jessica Chastain) and Nick Fowler (Sebastian Stan) to Paris to retrieve it. Easier said than done, as Mace and Nick find they are not the only ones aware of the device. The Germans want it too, with renegade German agent Marie Schmidt (Diane Kruger) getting it first.

From there, it becomes a globe-hopping set of action pieces as everyone tries to get the encryption device. Mace, still mourning Nick's death, enlists her friend and retired MI6 agent Khadijah (Lupita Nyng'o) for help. Soon the three have to not just work together but have Columbian psychiatrist Graciela (Penelope Cruz), who is caught up in this when attempting to bring Luis back safely.

As the various women work to retrieve the device, they find unexpected help from the Chinese through their agent, Lin Mi Sheng (Bingbing Fan) and an unsurprising adversary. The women face personal losses but also know they must work together to save the world. 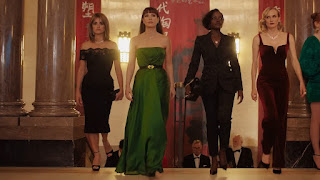 The 355 has a good idea behind it, but there is a terrible lethargy running through it all that makes it so routine and dull. We have something there, but I think one of The 355's issues is in how our team is introduced. The various entries of one group member seems almost intrusive on the others. Just as you start focusing on Mace, we then get Marie thrown in. Just as we get Marie's story and involvement rolling in, in pops Graciela, then Khadijah. It gets to the point where we forget the other women are there, and by the time we get to Lin, there isn't much for the audience to care that much about her, let alone them together.

That isn't to say we don't care about them as individuals. However, only Graciela, the only non-agent of the bunch, has anything close to a backstory: a husband and two boys whom she is devoted to. The others are given familial relationships: Diane and a father figure, Khadijah and her boyfriend, but they leave so little impact that when they meet unfair ends, we have little investment in either the characters or the women they love.

The 355 is in many ways rather routine. We get the "twist" that is clearly obvious and a collection of stock characters. What sinks The 355 is that everyone looks rather bored. There is exactly one scene where the females appear to be bonding, but even here there seems to be a hesitancy in their performances. 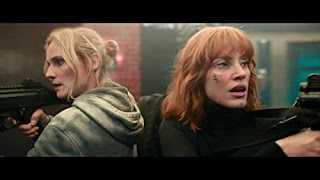 The worst is Chastain, who sleepwalks throughout the film. Whether it is attempting to express love or desire for Nick or going after criminals, she has a look of disinterest throughout the film. Not even in the action scenes does Chastain look engaged in the proceedings. As much as Chastain looks bored and disengaged, The 355 has almost everyone acting this way. Out of the female leads, only Kruger appears to show anything close to emotion, particularly when she gets to act in her native German.

Sebastain Stan looks as if he was genuinely drugged, attempting to arouse himself enough to show the slightest interest in things. Curiously, it is his character's arc that pushes The 355 down. I can believe one obvious twist with him, but not two. The second is simply too laughable to believe.

The action scenes too were infected with a sluggishness that made them almost dull. Worse, director and cowriter Simon Kinberg (writing with Theresa Rebek) indulged in the fast cutting that many action films suffer from, making things sometimes hard to follow.

The 355 could be forgiven as so much fluff, a mindless action film that showcases women without condescending to either gender. However, it is done in by a routine story, dull action scenes and almost wholly bored actors. The second twist with Nick for me was what pushed it further. The 355, whose name was inspired by a real-life American Revolution female spy, was a wasted opportunity. It would have been better to have made a film about Agent 355 rather than a group of females inspired by her.