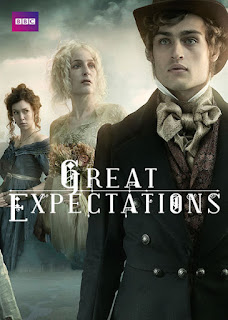 While my experience with Charles Dickens' Great Expectations is only through the various adaptations, I think I am safe in saying that this is one of his bleaker novels. Even by those standards however, I was surprised at how bleak and despairing the 2011 BBC adaption was. While in some ways sumptuous, in other ways dull, Great Expectations has some good performances but one awful one in the midst of it that brings the project down.

Young Philip Pirrip better known as Pip is forced to help escaped convict Abel Magwitch (Ray Winstone). Magwitch may be a criminal, but he curiously is nicer than either Pip's sister or Orlick (Jack Roth), the apprentice blacksmith to his uncle Joe (Shaun Dooley), the only kind person in Pip's life. Pip's life however takes a few strange turns.

First is when he is called to serve at Satis House, home of the wealthy recluse Miss Havisham (Gillian Anderson). Havisham is haunted by her jilting at the altar to where she still wears her wedding dress and keeps the rotting wedding feast intact. Pip is made the playmate of Estella, Havisham's adopted daughter, but this is part of Havisham's crazed revenge plot. 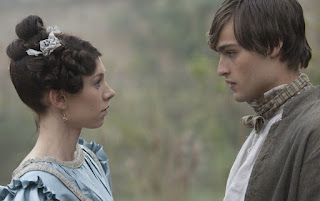 A second turn is when seven years later, the adult Pip (Douglas Booth), now apprentice to Joe, is made heir to a great fortune by a mysterious benefactor who wishes him to "live as a young fellow of great expectations". Now off to London to live the lush life, he becomes friends with Herbert Pocket (Harry Lloyd), Havisham's nephew whom as a child he once punched. Their purse strings are controlled by Jaggers (David Suchet), an efficient lawyer who deals with young men of privilege.

Pip pursues Estella (Vanessa Kirby) now that he is a gentleman, but she has been trained to be cold towards men. Her coldness is perfect for wealthy Bentley Drummle (Tom Burke), who cares nothing for her but only for her future fortune. Once Pip discovers whom his secret benefactor is, things go full speed as he tries to sort out his own life while attempting to help Herbert and his secret benefactor. As much as both Havisham and others attempt to thwart out pair, circumstances bring Pip and Estella together over all their obstacles.

In some respects, this Great Expectations has a wealth of great acting. At the top of the list is Suchet as Jaggers. Cold but efficient, blunt but aware, his Jaggers is frightening in how he makes sense even as he appears coldhearted. He does not tolerate fools and executes his clients wishes with efficiency, and Suchet dominates everyone who shares the screen with him.

Anderson, the only American in the cast, takes a different tact with her Miss Havisham. She has a singsong style to her delivery, childlike that makes her version more sympathetic. Anderson still makes Miss Havisham into a totally creepy figure, but we see the haunted woman behind the cray-cray. Her Miss Havisham does not appear to be the bitter jilted spinster of lore. Instead, she appears more haunted and lost, a broken woman suspended in a living death. Her first appearance makes her look like a literal ghost, giving her a haunted quality. It is as if she were a walking corpse.

She is also more manipulative, fixated on bringing misery to others as vengeance for having misery visited upon her long before Estella or Pip were born. It is an exceptionally strong performance that is to be commended.

Another standout is Harry Lloyd's Herbert Pocket. He is somewhat diminished in this adaptation, but Lloyd makes Pocket into a good man, reformed from his youthful arrogance into someone who is motivated to do good and love well. Cheerful but serious when needed, one wishes for a Herbert Pocket spinoff where we see him and his wife in Cairo. 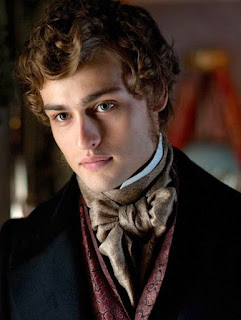 What sinks Great Expectations a great deal is the central character. It is not Douglas Booth's fault that he is exceptionally pretty. It is his fault that he cannot act, at least not in Great Expectations. One already finds it laughable that such a delicate looking, almost porcelain like figure such as Booth would plausibly be an apprentice blacksmith. He in actuality looks like he's never done a single day's worth of manual labor in his life, let alone something as labor intensive as a blacksmith.

Booth's delicate features and elegant manners are already difficult to overlook to be seen as a working-class hero. It is his total blankness as Pip that dooms him and Great Expectations. No matter what the situation, Booth gives the same disengaged expression. He is like many people who have film/television careers based more on their looks than their acting prowess. His lack of reaction when his benefactor reveals himself should elicit howls of laughter. It does not matter whether he is trying to con an old hand like Jaggers, express ardor to Estella or feverishly work to save Herbert. Booth gives the audience the same facial expression throughout Great Expectations.

I once commented that Jaime Dornan's performance in Wild Mountain Thyme was more that of a good- looking man who can speak than of someone who could actually act. As a side note, I still feel this way about Dornan regardless of the praise he's gotten for Belfast. When it comes to Booth's performance in Great Expectations, I'm not sure he could even get past the speaking part. It is just so blank and empty. Worse, it makes Pip look less naive and more eternally stupid.

Perhaps Booth's weakness as an actor is why Kirby seemed to match him in the blankness of her own performance. While not as bad as Booth, Kirby looked neither like the cold woman or the simmering woman underneath.

Great Expectations also, I think, went overboard in its Gothic trappings. The miniseries is dominated by endless shades of grey to where you wonder if sunlight even exists. It is as if the production wanted to encase you permanently in Satis House. Such dour looks and heavy greys work when we venture into Miss Havisham's ruined home, but why do so when entering the magic world of cosmopolitan London?

Despite having more time to develop the Dickens story than other versions, this Great Expectations seems almost rushed. The heaviness of the production and Douglas Booth's lack of performance pushes the project down. It has the saving grace of strong performances from others (Suchet and Anderson in particular) but I found it a terrible disappointment. My expectations were not met.