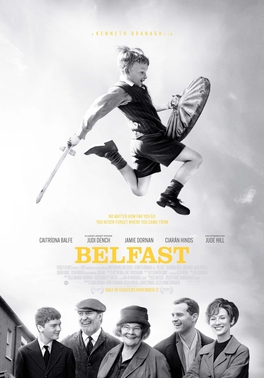 BELFAST
There is something to nostalgia, recalling the past as halcyon days even in the midst of tragedy and terror. Belfast, the newest film by writer/director Sir Kenneth Branagh, is a sweet, charming little Irish tale of how even the middle of horrors youthful exuberance will not be denied.
Buddy (Jude Hill) dreams of slaying dragons and believes his life on a quiet Belfast, Northern Ireland street is the best of all worlds. However, The Troubles come his way when a marauding group of Protestant militants attack the homes of the Catholics living there. As Buddy's family is Protestant, they are unharmed, but they and the other Protestant families side with their Catholic neighbors.
Pa (Jamie Dornan) is away in Britain working, trying to pay off a massive back tax debt but unable to fully stay away from gambling. Ma (Caitriona Balfe) does her best to keep home and hearth together, watching Buddy and his brother Will (Lewis McAskie). Buddy also has Granny (Judi Dench) and Pop (Ciaran Hinds) to offer love and advise.
Buddy worries he may be going down the wrong path towards Hell after a fiery sermon, loves the magic of television and movies, and pretty, smart classmate Catherine (Olive Tennant). He also observes the financial and marital troubles his parents are going through and the tumult his community faces as Protestants and Catholics begin tearing at each other. Things culminate when his friend Moira (Lara McDonnell) gets him involved in a riot. In a mix of terror and innocence he steals washing powder, setting off a chain of events that forces his parents' hands about their future in this place they love.

Belfast manages a strong balance between Buddy coming of age and of the chaotic world around him. The Troubles mostly stay in the background, but they are never far off. We start with the rioting that invades Buddy's world and near the end we see the tense standoff involving Pa and local Protestant thug Billy Clanton (Colin Morgan). In between moments of sadness and irrational violence, we get slices of life that most of us understand.
The springing of first love. The loss of beloved family members. The magic of movies.
It is quite easy to fall in love with Buddy, as Jude Hill gives a smashing and delightful performance. In turns innocent and slightly impish, Hill does wonders with the role. He shows Buddy's pleasant manner when aiming to attract Catherine's attention, yet a frightened and confused person when caught up in the rioting and looting. He does not want to do wrong, and in his misguided effort to follow Moira's instructions his thoughts are for his family. Showing the washing powder to his horrified and enraged mother, his cries of "IT'S ORGANIC!" show how unaware he was of the seriousness of what had happened. 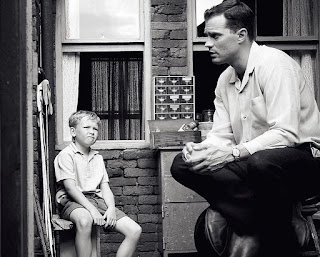 Belfast is a strong showcase for some of the actors. While billed as a supporting role, Balfe's Ma for me was a lead. Balfe uses stillness and quiet to show Ma's genuine love for her family. However, she can use that quiet to show the frustration to anger she has against her husband and his irresponsibility.
Dench's Granny and Hinds' Pop also handle their roles as the older but loving couple well. We see how despite losing so many, Granny still has inner strength to let go. Hinds makes Pop the wise and caring second father to Buddy, offering his knowledge on wooing.
No force on this Earth will compel me to say Jamie Dornan can act. He is a very pretty man, I will grant. Perhaps Dornan's success in Belfast is due to how generally quiet and blank Pa was. As such, Dornan wasn't asked to do much, merely look on and be pleasant.
Belfast also makes good use of the small amount of color it has. The film opens and closes in color, indicating the present while the past is almost always in black-and-white. When we do see color in the film, it is when we see the various color films or a stage version of A Christmas Carol that Granny took Buddy to. Branagh was making the magic of movies, of theater, be the only color that this world had, emphasizing Buddy's imagination in making fiction more fantastic than his reality.
Part of me thinks that the dislike of Belfast comes from its open and unabashed sentimentality. I have no issue with an openly, unabashedly sentimental memory. Belfast is simple, short, sparse and devoid of flash. Those, however, turn out to be some of its best qualities.
DECISION: B+
Posted by Rick at 2:54 PM