Murder Most Foul: A Review 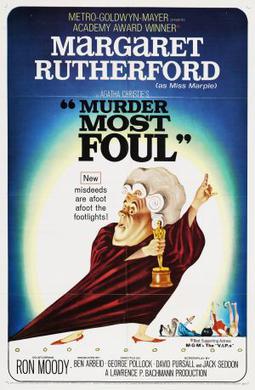 MURDER MOST FOUL
Murder takes center stage in Murder Most Foul, the third of the four Miss Marple films starring Margaret Rutherford as our snooping busybody. The film did not stray from its winning formula, making for another nice romp.
Miss Jane Marple (Rutherford) is the lone juror who voted against convicting a man accused of murdering his landlady. She is not convinced the open-and-shut case is as open-and-shut as it appears. Through her own investigation, Miss Marple finds that the victim, Ms. McGuinty, was blackmailing someone from her past.
That past leads Marple to the Cosgood Players, a theatrical troupe where McGuinty had worked once as an actress. Its impresario Driffold Cosgood (Ron Moody) is not keen on having Jane Marple as his newest stage star, but he thinks he can dupe her into being a financial backer by indulging what he sees as her acting whim.
Marple, however, knows that there is a murderer among the actors. Who could the murderer be? There are more victims, some intentional, some accidental, until with some help from her Boy Friday Jim Stringer (Stringer Davis) she finds that McGuinty's killer means to do her in too. The murderer, however, learns too late that Miss Marple has a few tricks up her own sleeve. 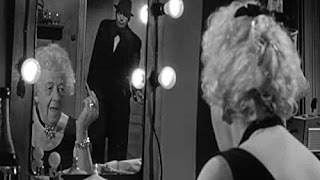 Murder Most Foul got an unexpected bonus when its star, Margaret Rutherford, won Best Supporting Actress for The V.I.P.s. Now with an Academy Award-winning actress at your star, you can tout the Oscar in your ads. This may have been a nice touch, but frankly by now audiences should know what they are getting with a Margaret Rutherford as Miss Marple film.
What that is, is a nice and not uncomplicated mystery punctuated with bits of humor. Murder Most Foul has some surprisingly clever wordplay. Poor Constable Wells (Terry Scott) bemoans the lack of a conviction. "That woman's made a mockery of my one and only murder," he sadly notes. Cosgood remarks that Miss Marple would make for a good Angel or Duchess, and at least one is a pun (Angel as both a character and the name for a financial backer). Whether "Duchess" is a nod to her Oscar-winning role as the Duchess of Brighton I cannot say for certain, but it is a nice touch.
We get a nice shoutout to Agatha Christie herself when Miss Marple rifles through old playbills from the fictitious Christie play Murder She Said.
The film also has the blessing of being set in the world of the theater, allowing for actors to ham it up to their hearts content. Ron Moody's equally daffy and pompous actor/director is wickedly amusing. It's a pity that he could not end up being Miss Marple's sidekick given how well they work together. He and Rutherford, who puts in another charming performance, do an excellent job.
Rutherford too gets a chance to indulge a little bit of comic theatricality when performing her audition monologue. The film falters in terms of performance only when we get such characters as Eva (Alice Seebohm), who is a bit too exaggerated as a fellow thespian who goes into psychic trances and has intuitions.
Despite taking Mrs. McGuinty's Dead from Hercule Poirot to Jane Marple, the adaption is probably less complex than the book it is based on. We get a group of suspects, a few victims and a conclusion to the mystery. Murder Most Foul keeps to the "murder and mirth" formula that these Christie adaptations created. It is a pleasant romp which satisfies those who enjoy them.
DECISION: B-
Posted by Rick at 3:13 PM