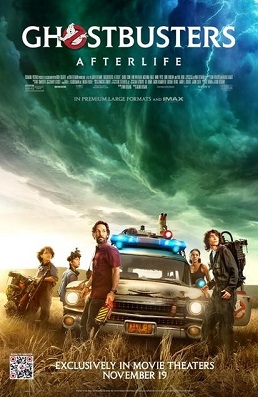 When theaters began slowly reopening after the (hopefully) worst of the COVID-19 pandemic/panic, older films were rereleased to welcome back audiences. Among them was the 1984 Ghostbusters, and one takeaway I had when I saw it again was a surprise as to how long it was. I have never been so enamored of Ghostbusters as to find it an unimpeachable classic. I was simply too young to be passionate about the first one. Just like Superman III star Annette O'Toole was unaware there was a Superman IV, I didn't know there was a Ghostbusters II, let alone seen it.  The Ghostbusters reboot was terrible, and I have long argued it wouldn't have been funny with men.

After the death of her father Egon Spengler, young Callie (Carrie Coon) takes her children Trevor (Finn Wolfhard) and Phoebe (Mckenna Grace) to Summerville, Oklahoma. Her long-absent father, known as a major eccentric, left them a dilapidated home, which for better or worse will have to do for the very poor Callie.

While here, the more intellectual Phoebe makes friends with a tween podcaster nicknamed "Podcast" (Logan Kim), whose podcast revolves around crime and the supernatural. Her brother Trevor has more interest in pretty Lucky (Celeste O'Connor), who works at a diner and is the Sheriff's daughter. Callie herself starts a tenuous romance with Gary Grooberson (Paul Rudd), a generally disinterest science teacher far too bright for his job but far too fanboy of the original Ghostbusters.

There's something spooky going on in Summerville: earth tremors without any cause, a specter of sorts haunting Phoebe, the discovery of a secret lab, strange otherworldly figures bursting out from a long-abandoned mine. What evil is at work here, and what does both the town's origin story and Egon's mysterious work have to do with things? It all culminates with an epic battle against an old enemy, the reappearance of old frenemies and unexpected help from old friends. 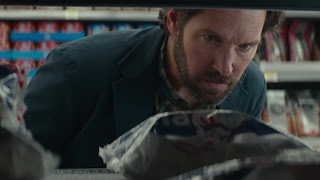 My sense is that because Ghostbusters means so much to so many, audiences will embrace all the shoutouts, cameos and nods to the original. The film has so permeated the culture that I think people who have never actually seen all or any of the various films probably know things like the Stay Puft Marshmallow Man. The genuine love and affection the Ghostbusters franchise maintains with many, however, I think blinds people to Ghostbusters: Afterlife's flaws.

Take for example the sequence where the miniature Stay Pufts create cute mayhem at the Walmart. The sight gags were at times cute, but other times creepy (they really would roast each other to make s'mores). Also, and I will admit I may be overthinking things here, how is this Walmart so empty at this particular time?

I could not shake the sense that cowriter/director Jason Reitman (writing with Gil Kenan) was coasting too much on nostalgia to where other elements disappeared. Gary is meant to be reasonably intelligent, but he never seems bothered by the fact that he put the lives of two minors at risk by trying to open Egon's ghost trap. Other elements, such as Trevor's attempts at romancing Lucky or the logic of Phoebe being able to use her one-phone-call-from jail to call Ray Stantz (Dan Aykroyd) from Summerville to New York seem flat-out pointless or illogical. 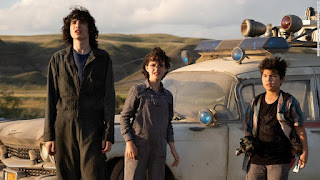 A bigger issue is with Ivo Shandor (J.K. Simmons). This character, buried in a Lenin's Tomb-type manner, has no purpose. Worse, he barely says anything to his goddess Gozer before said goddess rips his body in half. For a film pushing two hours it not only felt longer but at times just adding things that did not serve much of a purpose.

Perhaps by biggest complaint however goes to what is meant to be a touching tribute. For myself, I found seeing the late Harold Ramis reappear as a literal ghost not at all moving but almost garish to freakish. There is something just so off-putting to me about the whole thing regardless of whether the family is fine with it or not. I was a little creeped out at the sight of Ramis fighting alongside the other returning original Ghostbusters.

Here is where I separate myself from fans: they, I imagine, loved it, while I did not. Also, as a side note, I thought Ramis' Spengler looked more like a resurrected Trotsky but that's neither here nor there.

I think the actors on the whole did well with the material they were given. Wolfhard and Grace worked well in their roles of Trevor and Phoebe even if the former was more a cliche (bumbling lovelorn teen) and the latter veered close to being a Mary Sue-type, far more knowledgeable about everything and rarely if ever being wrong. Kim's efforts to be comic relief are appreciated if not embraced by me, and O'Connor felt the need to channel Zendaya's MJ from the MCU Spider-Man movies. To be fair she was better than Zendaya's eternally sarcastic MJ in that Lucky was capable of some humor, but on the whole, I think the script held everyone back.

There is nothing wrong with the love Ghostbusters elicits from its fans. I don't dislike the original one bit, though I confess to finding the fanaticism around it puzzling. Ghostbusters: Afterlife is pleasant enough, harmless nostalgia and fan service. I didn't warm up to it as others, but not terrible.