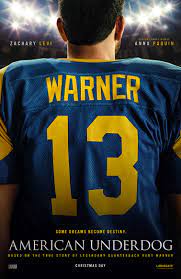 I confess to not being a football fan and while I did read NFL Hall of Fame member Kurt Warner's autobiography, I could not make sense of things when he "talked shop". American Underdog, the adaption of his All Things Possible, works well in what it sets out to do: be inspiration and moving.

Ever since he was a small child idolizing San Francisco 49 legend Joe Montana, Kurt Warner has worked to get to the National Football League. This dream will be extremely hard to accomplish for someone who gets little play at the University of Northern Iowa. Despite his exceptionally low profile, he does get a call from the Green Bay Packers, who drop him on the second day.

This setback devastates Warner, for whom football is one of the only things he has to give him meaning. There is, however, something else: his long-term relationship with Brenda (Anna Paquin), a divorcee with two children, one of them legally blind and with developmental issues. Needing to move on and wanting to support his de facto family, Warner takes a job as a grocery store stock clerk.

His tale takes a turn though when after family tragedy he goes into Arena Football, which he initially detests. He soon takes to it like a duck to water, so much so that the St. Louis Rams pick him up as a backup quarter. That backup status ends in preseason, and despite some misgivings from the Rams coaching staff, Coach Dick Vermeil (Dennis Quaid) believes Warner can succeed. Thus begins an impossible rise from stockboy to Super Bowl MVP. 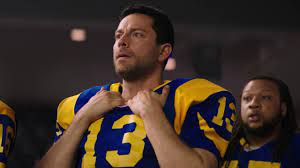 American Underdog, according to Warner, is not strictly about himself. The title applies to not just him but Brenda and Zack (Hayden Saller), their special needs son. That is a wonderful way to look at the Warner family as a whole: three individuals facing large odds who managed to achieve their individual goals. The film certainly knows what it wants to do right from the get-go. American Underdog starts in voiceover with Levi as Warner recite the diminishing percentages of any high school player moving on to college football to the NFL to the Super Bowl to MVP. This is accompanied to the sight of a young Warner, in his homemade jersey, throwing his imagined Super Bowl-winning touchdown.

To my mind, Warner's near-impossible and unbelievable story is worth looking at, and I think many will be inspired by this story of ordinary people, visited by at times immense tragedy, finding all forms of love. There's the Brenda and Kurt love story, both stumbling into each other's lives. There's the love Kurt has for Zack and vice-versa. There's the love Kurt has for football, the primary motivation to work and overcome a hard life where he is almost always dismissed by others.

I hesitate to include the love Kurt and Brenda have for God for American Underdog seems to downplay the strong Christianity the Warners are known for. We get hints of their strong religious faith: Brenda talks about how her faith has helped her endure a myriad of personal tragedies, Kurt prays for her after her parents are killed in a tornado, and he mentions how he wants her faith when he proposes. 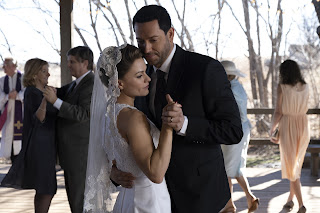 However, we never see them attend any Services, share prayers or give much indication that Christ is central to their lives. It feels a bit like God is mostly absent from American Underdog. Even the famous moment when Warner replies to the "First Things First" question about the final touchdown pass with, "Well, first things first, I've got to thank my Lord and Savior up above. Thank you, Jesus!" at Super Bowl XXXIV is cut. It's no secret that Kurt Warner is a devout, passionate Christian. Judging by American Underdog, however, his faith is not "first things first" but "secondary". Perhaps screenwriters David Aaron Cohen, Jon Gunn and co-directors Jon Erwin (directing with his brother Andrew) were aiming for broader appeal with a more general "inspirational" story about overcoming than one about how Christ helped them overcome.

I cannot say for certain but given how I read All Things Possible and know how central Christ was in his memoir, seeing the film adaptation downplay both Christ and the Warners faith in Him is puzzling.

Zachary Levi deserves much praise for showcasing a believable football athlete given he does not have an athletic background. His performance had some positives, particularly in his interplay with Zaller, who stole the show as Zack. He also brought some of the everyman quality Warner has in his romancing of Brenda. However, sometimes all he is left to do is stare intensely into space, and the overall effect is slightly amusing. Much better is Paquin, who transcends the "supportive wife" cliche and makes Brenda a more interesting figure.

She is a hurt woman, hesitant but also loving and even a bit flirtatious (her manner with Levi in the beginning shows a slightly naughty albeit clean side to Mrs. Warner). I thought well of Chance Kelly as Rams offensive coordinator Mike Martz, oozing contempt for Warner until we see it was all part of the metaphorical "iron sharpening iron". Quaid's Dick Vermeil is effective, being one of the few who has faith in this undrafted rookie quarterback.

American Underdog is clearly inspirational, and I admit at times I got caught up in Kurt Warner's struggles to achieve his goal of gridiron glory. It is surprising on the whole, however, to find that the Greater Glory of Christ is a bit opaque.