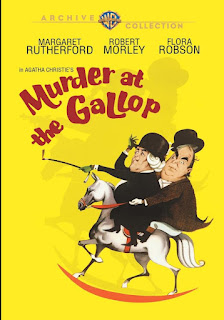 MURDER AT THE GALLOP

As Murder, She Said was a surprise hit, there was no doubt that a Miss Marple sequel would be made. Murder at the Gallop stays close to the Margaret Rutherford Miss Marple formula: a not-very-complicated murder mystery punctured with some humor. It is the very definition of a light romp, a breezy and enjoyable film that seeks only to entertain.

After coming upon the sudden death of rich recluse Mr. Enderby, Miss Marple (Rutherford) and her friend Mr. Stringer (Stringer Davis) suspect it was not a mere heart attack. Instead, it was murder, where Mr. Enderby was literally frightened to death.

Who could be the murderer among his relatives, all of whom benefit from his death? His estranged sister Cora is soon ruled out, as she herself is quickly murdered. Miss Marple, aware that a murder based on inheritance rarely if ever ends in one murder, knows there's another one coming. Launching her own investigation, she goes to the Gallop Hotel and Riding Establishment.

Mr. Enderby's cousin Hector (Robert Morley) is delighted to have a formidable horsewoman staying at the Gallop. The other suspects: fourth cousin George Crossfield (Robert Urquhart), niece Rosamund (Katya Douglas) and her husband Michael (James Villiers) are less enthusiastic. What role if any could Cora's loyal companion Miss Milchrest (Flora Robson) have had in the case? Whodunit and why? Will solving the mystery mean Miss Marple may be the next victim herself? 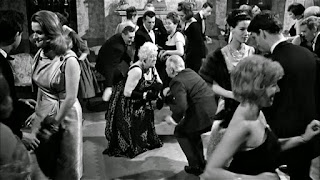 Regardless of the logic of the conclusion, you know what kind of film Murder at the Gallop is when you see the portly, elderly Margaret Rutherford shake her groove thing when dancing The Twist. This is meant as light entertainment, with a greater focus on mirth than on murder. As such, we get treated to the double act of Rutherford and Morley doing sight gags. There is nothing that says "this is not serious" more than Hector literally putting his foot on Miss Marple's ample derriere as she pulls his boot off.

We even get a bit of an in-joke when Miss Marple advises the disbelieving Inspector Craddock (Bud Tingwell) to read Agatha Christie's fictitious The Ninth Life, where a cat is the murder weapon. "Agatha Christie should be compulsory reading for the police force," Miss Marple intones. Perhaps this homage to Christie was a way to apologize for taking her novel After the Funeral and switching the detective from Hercule Poirot to Miss Marple.

Then again, the MGM Miss Marple films were not exactly straightforward adaptations to start with.

The murders themselves are not graphic, adding to the lightness of Murder at the Gallop. As such, the enjoyment comes less from trying to find out who the murderer is than on the performances. Here, we get treated to a couple of nice ones.

Rutherford has an absolutely endearing face and manner as Miss Marple. She isn't stupid by any means, but she also is not strict or serious. Instead, she balances the danger with an almost impish manner, a twinkle in her eye among the various bodies lying around.

She is matched by Morley, who keeps to his usual slightly befuddled Englishman. Though the idea that Hector could be the murderer given how often he tut-tuts around, there are flashes of potential menace underneath the addled manner. Robson, the third of the three best-known names in the film, was a bit too forced in the "meek maid" manner, but I think this was right for the role. 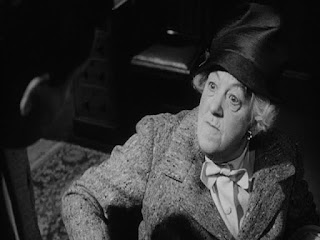 Murder at the Gallop even allows for an ever-so-slightly opening to the innocent yet sweet manner between Miss Marple and Mr. Stringer, no surprise given that in real life Rutherford and Davies were married. While always referring to each other as "Miss Marple" and "Mr. Stringer", there is one moment when she calls him "Jim", indicating a little more than perhaps we have seen before.

If there are flaws to note in Murder at the Gallop, it is in the plot itself. Miss Marple overhears, for example, something about a valuable painting that may have been the motive (Miss Marple is a Mistress of Eves-dropping). Yet we have already heard the discussions about a painting that everyone wants but which Hector won't give (as it is not listed in the will he isn't required to). It feels a bit of a MacGuffin but not a particularly good one.

Moreover, given its brief running time (at 81 minutes it is the shortest in the Miss Marple series) we do not have much time to see who could be the murderer. The actual murderer is slightly obvious only due to how they behave, not so much for the clues pointing this particular person out.

Still, those are minor quibbles. Murder at the Gallop is a delight from start to finish, a mystery one can watch without delving too much into things, anchored by a delightful performance from Margaret Rutherford. It may not be pure Christie, but it is pure entertainment.