It Happened on Fifth Avenue: A Review 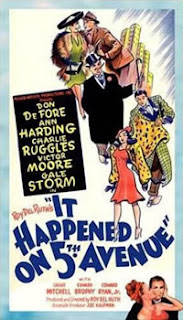 IT HAPPENED ON FIFTH AVENUE
Another Christmas, another Christmas-themed film. This year, it is the lesser known It Happened on Fifth Avenue, which I would argue is not a real Christmas film. Pleasant enough but not particularly interesting, It Happened on Fifth Avenue has an idea around it that just did not fulfill its promise.
Hobo Aloysious T. McKeever (Victor Moore) slums it every winter in the boarded-up mansion of Michael O'Connor (Charles Ruggles) while O'Connor is in his Virginia winter home. Aloysious happens upon veteran Jim Bullock (Don De Fore), recently thrown out of his apartment to make way for another O'Connor building. As there is plenty of room in O'Connor's Fifth Avenue mansion, Aloysious offers him room to stay.
Al clears up the confusion that he really isn't O'Connor's friend and assuring Jim that he leaves things exactly as he found them, which puts Jim at ease. However, unexpected complications arise with the arrival of Trudy (Gail Storm). Al and Jim mistake her for another homeless person when in fact she is O'Connor's daughter. She keeps up the ruse, with "Trudy Smith" and Jim falling in love.
However, Michael eventually finds his wayward daughter. To please her and see if Jim is really in love with "Trudy Smith", he agrees to be "Mike", yet another homeless man. The house is bursting with people, as two of Jim's former Army buddies (and their respective wives and children) also take up residence at the O'Connor mansion. Mike is displeased at the indignities foisted on him in his own home and is on the edge. Only the arrival of his ex-wife Mary (Ann Harding) can help keep up the subterfuge and bring this unofficial house party to a joyful conclusion. 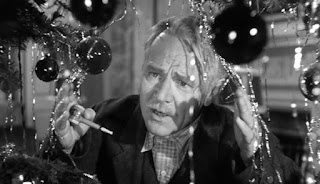 There is a Christmas scene in It Happened on Fifth Avenue. There is even a Christmas song (That's What Christmas Means to Me). However, for a film billed as a "Christmas movie" this is the only reference to Christmas in the whole of It Happened on Fifth Avenue. Christmas itself appears to be incidental to the story. It is not the focus of the film, so I am puzzled as to why It Happened on Fifth Avenue is called a "Christmas movie".
The movie is not terrible, but I found it dull and long. That isn't to say there weren't nice elements in It Happened on Fifth Avenue. Moore is absolutely winning as Aloysious T. McKeever, the wise and kind hobo. He is polite, caring, moral (he won't have any hanky-panky going on between Mike and Mary) and despite his squatting and breaking-and-entering, he leaves the mansion exactly as he found it. There's a lightness to Moore's performance that is endearing.
De Fore and Storm (perhaps the most uniquely named actress of her time) were also pleasant and delightful as Jim and Trudy. Ruggles and Harding too worked well as the formerly married pair who still loved each other. Curiously, Ruggles got the best lines and moments, surprising given he wasn't a major part of the film until past the halfway point.
The best bit is an extended albeit perhaps unnecessary part where he mistakenly thinks Trudy already has a baby. The wordplay is good enough to make it barely plausible that Mike gets the wrong impression, though to my mind it is a bit forced. De Fore also has a bit of clever dialogue when he is ejected from the apartment while chained to his bed. "Just because I'm in bed it's no sign I'm taking this lying down!" he yells on his way out.
If the film had kept its focus on the romances and this particular family, we could have had a better film. However, It Happened on Fifth Avenue instead started becoming too crowded, just like the mansion itself. You had nine characters all vying for attention, and something had to go. What had to go was the two married couples and their two kids. They not only added little to nothing to the film but also were pretty much forgotten for most of it. 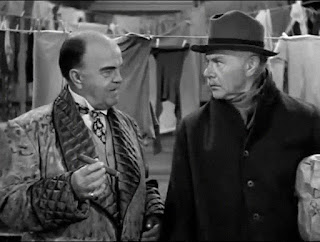 They were needed only when the film turned its focus on Jim's plans to turn a former Army barracks into low-cost affordable housing for returning GIs. There is nothing unique about the cold and uncaring businessman attempting to squash the little guy until he gets wise thanks to the kindly poor. It Happened on Fifth Avenue squandered a good opportunity to be a good film by crowding in too much and too many.
It is like a Frank Capra knockoff: the basic idea of it but without the skill and heart Capra would have brought to it.
It Happened on Fifth Avenue, despite claims to the contrary, did not strike me as a genuine Christmas film. It is barely passable thanks to the performances, especially Moore, but I am hard-pressed to make it a genuine Christmas classic.
DECISION: C+
2012: Arthur Christmas
2013: A Christmas Carol (1951)
2014: Prancer
2015: A Madea Christmas
2016: Batman Returns
2017 (Eve): Miracle on 34th Street (1994)
2017 (Day): The Man Who Invented Christmas
2018: Christmas with the Kranks
2019: Last Christmas
2020: Roots: The Gift
Posted by Rick at 2:01 AM