Welcome to Rick's Texan Reviews Annual Christmas Day Christmas Film review. Each December 25, I look at a Yuletide-themed film and this year we have Last Christmas.

I imagine that while most people know the chorus to Wham!'s Last Christmas, few know the entire song verbatim. The film Last Christmas is said to be 'inspired' by the music of the late George Michael, but it's more inspired by one song, which if memory serves correct is played in some way at least four times. Last Christmas is mercifully not terrible, but it is bad, continuing a run of poor holiday films that push themselves on audiences.

In 1999 Yugoslavia little Katrina sings like an angel, but in 2017 Croatian refugee Katrina or "Kate" (Emilia Clarke) is floundering. A drunken slut with vague ideas about being a singer, she jumps from one-night stand to one-night stand, crashing at whatever friend's couch that she hasn't managed to alienate. Kate works at a Christmas-themed shop open all year run by a woman calling herself "Santa" (Michelle Yeoh). Always dressed like an elf, Kate is openly miserable. 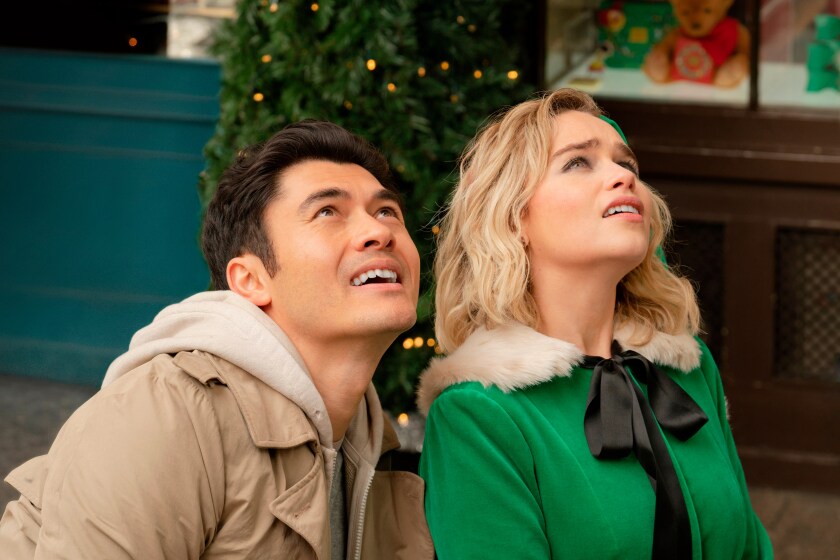 There is a reason for her misery: she had a heart condition requiring a transplant but she is thoroughly careless in how she manages her health and life. Kate also hates her mother Petra (screenwriter Emma Thompson) and resents her more successful older sister Marta (Lydia Leonard), though she's fond of her father Ivan (Boris Isakovic). And then she meets Tom (Henry Golding). He's fun, wacky and more important, interested in her. Interested enough to pursue our dour Kate, who eventually falls for his charms.

Despite herself, Kate starts growing as a person under Tom's mentorship. She stops drinking and picking up men. She becomes an unofficial matchmaker for Santa. She slips into volunteering at a homeless shelter, in particular by singing in front of it to raise money. After outing Marta as a lesbian, she starts making amends. She even starts reaching out to Petra and helps her become less reclusive and depressed despite the bigotry of Brexit.

Kate, however, still can't figure out why Tom disappears for days on end and is hard to find. It isn't until she goes back to his flat that she makes a shocking discovery: that 'last Christmas' it was Tom who literally gave her his heart when he was killed in a bicycle accident. With her ghostly romance over, Kate can now be a better person. 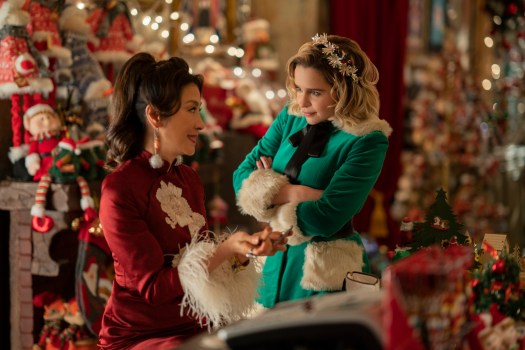 "Last Christmas, I gave you my heart, but the very next day, you gave it away. This year, to save me from tears, I'll give to someone special". It's one thing to draw inspiration from George Michael's lyrics. It's another when you use them as the plot itself. Last Christmas, Tom gave Kate his heart but the very next day (or at least following surgery) she threw it away (with booze and boys). This year, to save her from tears, she'll give it to someone special: her family, her friends, her fellow humans.

Is it a strange thing that Last Christmas appears to be as if someone decided to make a romantic comedy out of A Beautiful Mind? At least John Nash had the "excuse" that he was schizophrenic, but was Kate just bonkers? Her entire romance was a delusion, but if that wasn't already bad enough one wonders exactly how did Kate know who Tom was. Do people routinely know the name and life-story of those whom they received organs from? I figure Thompson (cowriting with Bryony Kimmings) and director Paul Feig thought this would be a heartbreaking & touching twist, but it ends up making Kate look crazy.

Still, a little part of me does wish there had been a sex scene between Kate and Tom. Seeing it revisited after discovering Tom was already dead when he and Kate met would have been wild! How would Kate end up having sex with a figment of her imagination?

I'm sure everyone meant well, but Last Christmas is thoroughly unbalanced. The relationship between Santa and Kate is contradictory. At times Santa and Kate appear to be almost besties. At other times Santa appears to be unaware of Kate's name: more than once she refers to Kate as "Elf". The subplot of Santa's own romance seems from another film altogether, and moreover is so overtly overplayed as to make one wonder if they were aiming for farce.

It's a terrible disservice to Yeoh, who comes across as a combination Dragon Lady stereotype and idiot. Despite Kate's irresponsibility in not locking the shop which results in a robbery, Santa won't fire her. Again sometimes she's her BFF, sometimes she's her tyrannical boss.

I never saw Game of Thrones, but I did see Me Before You and am thoroughly puzzled as to why Emilia Clarke is constantly pushed at me as this 'bubbly' personality. To her credit Kate did grow as a character but Clarke's efforts to be all adorkable grew tiresome, and her disheveled manner wasn't that good either. Golding was pleasant enough, but why Tom had to do these oddball dance routines to woo Kate one can only guess at.

As a side note, and something that may be a bit too technical, I did wonder how Katrina, despite having come to Britain as at least a tween, has no Croatian accent. Her older sister equally sounds quite British, or is Marta her younger sister? Thompson most certainly had an accent, making her sound like The Bride of Dracula and a way to throw in some anti-Brexit sentiments.

Last Christmas has such a ludicrous twist that I did literally burst out laughing, but on the whole I softened a bit to it. It's not good and illogical, but I suppose as far as bad Christmas movies go, Last Christmas will serve until Next Christmas.