There once was a time when the Walt Disney Company was satisfied with releasing sequels to their catalog as straight-to-video. Lady & The Tramp II: Scamp's Adventure. Cinderella III: A Twist in Time. The Lion King 1 1/2. Now they know better. Not only will audiences flock to live-action remakes of their vaulted vault (The Lion King, Aladdin) but will also shell out mucho money for sub-par cash-grabs, eh, sequels, to genuinely great films.

Frozen II is a pointless sequel to the massive Frozen, a needless venture Into the Unknown. Even that one could forgive if there were any good songs in it.

Queen Elsa (Idina Menzel or Adele Dazeem to John Travolta) rules over Arendelle, but she hears a voice calling out to her. Deciding to go Into the Unknown, Elsa ventures towards a mystical forest in the north, enveloped not just in a magical mist but in mystery ever since the time of her and her sister Anna's (Kristen Bell) grandfather.

Said grandfather, King Runeard, established peace with the Northuldra people and even built them a dam, only to find himself and his troops attacked. His Majesty's son managed to escape the forest's fog and return safe, though the how relates to Elsa and Anna.

Whether anyone else can escape the fog and return safe cannot be said for Elsa, Anna, Anna's boyfriend Kristoff (Jonathan Groff), his reindeer Sven or Olaf (Josh Gad), the happy-go-lucky snowman. All venture into the mystical forbidden forest sealed off by the Elements of Earth, Wind & Fire (along with Water), where the truth about both Elsa and Anna's heritage and the Northuldrian people is revealed. It's a shocking secret, one that may cost Arendelle its very existence until in the end all ends well, with Anna now Queen of Arendelle and Elsa among her own enchanted people.

Also, there's a running gag about Kristoff constantly bumbling his efforts to propose marriage to Anna.

Frozen II is a very confused, rushed production, as if everyone involved thought the best thing to do was create a film no one was actually asking for and try feverishly to recreate what made Frozen great. Unfortunately, they failed in every element.

There is no story here, unless the six screenwriters including co-directors Jennifer Lee and Chris Buck along with co-songwriters Robert and Kristen Anderson-Lopez were making some kind of oddball case for Native American reparations that involved destroying the Scandinavian version of Manhattan.

Never mind that the Arendellians, themselves innocent of any genocide or potential genocide their good old king was planning, or that their current monarch and heiress presumptive are themselves half-Northuldrian. To placate the Elemental Spirits, you had to drown a whole nation. It was nice of the Elements to at least push the Arendellians up to the hills at least so that they themselves wouldn't drown.

Whatever tension or romance or genuine affection Frozen had is gone. There really is nothing in Frozen II, apart from perhaps some pretty imagery. Granted, some of Frozen II looked nice, but if pretty is all you have to offer, then why bother taking out what made Frozen so great: the songs?

Making matters far worse is that the Lopezes decided to churn out a collection of rubbish, forgettable songs. The big push is to have Into the Unknown be this film's epic Let It Go, but apart from the actual line "into the unknown" I cannot remember a word from that song. I can't even remember how the melody goes. Robert and Kristen perhaps labor under the impression that if Menzel forces a song to the Nth degree, belting it out as if her life depended on it, then it's 'epic'. 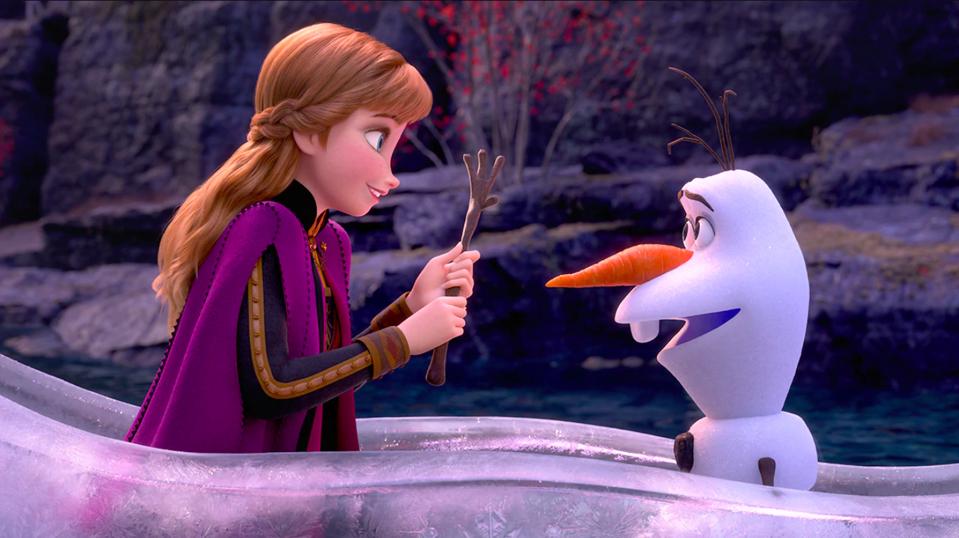 Into the Unknown is not big. It's barely loud, and for reasons I probably won't understand the end credits have a cover of it by Panic! At the Disco. Let It Go did what a great musical number did: express a character's emotion or state of mind. Into the Unknown expressed a need for "big musical showstopping number", ending up being neither big, musical, or showstopping.

Of all the songs, Lost in the Woods is the worst, which is saying quite a bit given how all the Frozen II songs are forgettable dribble. Lost in the Woods was so cheesy, something that sounds like a song a heavy metal/hard rock band releases to show they can make tender, emotional romantic ballads too. Poison has Every Rose Has Its Thorn. Extreme has More Than Words. Damn Yankees had High Enough. Queensryche has Silent Lucidity. Scorpions has Winds of Change.

Kristoff has Lost in the Woods.

It was hilariously awful, and frankly the nadir of Frozen II. At least I will remember Lost in the Woods, though for all the wrong reasons.

It would have made more sense to have Kristoff sing Heart's Alone given that both pretty much express the same emotions. Only difference is that Ann and Nancy Wilson have a greater sincerity and strength when they sing Alone than Jonathan Groff when he sings Lost in the Woods.

Frozen II has nothing worth anyone's time. It has no story. It has no songs. It has no point other than to milk the product for every cent that can be squeezed out of it. Frozen II would have made a great direct-to-video release. To coin a phrase, it is time to let it go.