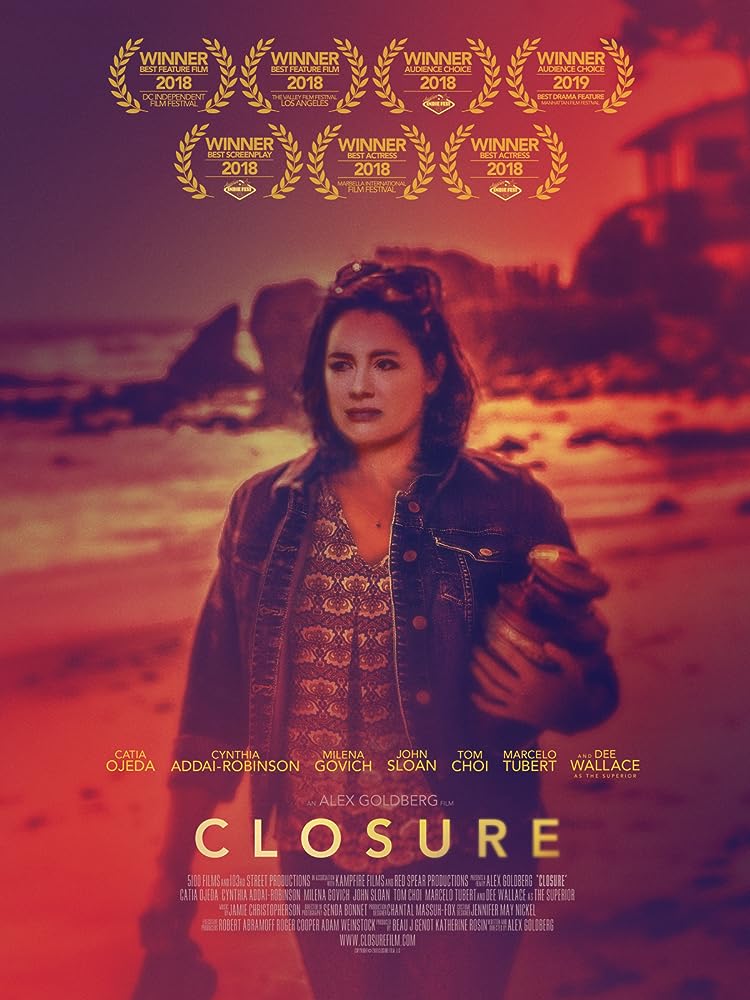 It might at first be hard to imagine that one of the funniest, wittiest and most heartfelt films of the year involved missing women, accidental prostitution, white slavery, sex cults, organic micro-meals and coke-snorting corrupt cops. Yet Closure manages to do just that: mix mirth and menace without losing balance in a hilarious and surprisingly moving film.

That Carrie has disappeared does not faze anyone in her circle much to Nina's puzzlement. Carrie's roommate Yasmina (Cynthia Addai-Robinson) believes it is all part of the karma and esoteric spirit world that people come and go. The neighbors Prudence (Milena Govich) and Jack (John Sloan) are not troubled either, though Jack, a struggling television writer, at least expresses some concern. Nina reluctantly asks for help from the police, but L.A. cops O'Leary (Michael McCartney) and Franklin (James Andrew Walsh) are not only no help but comically uninterested in anything other than in bickering with each other and accusing Nina of wasting taxpayer's money on fruitless searches.

Nina plunges into her own investigation, where she discovers that Carrie was essentially a hooker, or more precisely a girlfriend-for-hire. Their similarity in appearance causes some confusion, but Nina discovers that Carrie was part of a unofficial brothel where men hired women for actual dates versus pure sex, with some paying for long-term commitment-free relationships. Nina's investigation leads to her being hired by Hugo (Tom Choi) who is a genuinely nice guy easing his way to a relationship after a bad breakup.

Nina begins to struggle with her feelings for both Hugo and Jack while also still searching for her sister. This leads her to the soft-spoken money man of the operation, Iskander (Marcelo Tubert). As she is discovered snooping, Nina is surprisingly offered a rare audience with "Superior" (Dee Wallace), the madam of this operation. Nina is warned away from digging more into things, but she needs that closure, leading to Nina almost being killed, a farewell to both Hugo and Jack, and after following one last unexpected lead genuine closure for Nina.

It's strange that the synopsis makes Closure sound much more somber and dramatic than it actually is. In reality, Closure is one of if not the funniest movie I have seen all year, one that will have you laughing at the bizarre situations Nina finds herself in. I was laughing out loud at a lot of Closure, and it's a credit to writer/director Alex Goldberg that he keeps the balance between the serious and the surreal without slipping into farce.

Even Jack, ostensibly the most rational of Nina's immediate circle, seems oblivious to how bizarre the California lifestyle is, especially to an outsider. When Nina asks for his help in going to a club called "Club" to search for Carrie, he at first declines. "I'm late for kickball practice," he tells her. After a puzzled Nina asks if people really need 'kickball practice', he retorts, "We might make the playoffs".

Closure is filled with witty lines and situations that underscore Nina's culture clash and reactions to the very strange situations she keeps stumbling into. When she asks Yasmina how far the beach is from the apartment, she replies, "Twenty minutes by foot, an hour by car," in a perfectly sincere manner, as if it's the most rational thing in the world that walking distance is faster than driving distance. Under the guise of being a dog-walker, Iskander instructs her to give his beloved pug Marco the coconut water in the fridge but never the tap water.

"If you're thirsty, help yourself to the tap," he helpfully adds.

We also see Superior's henchmen quietly play croquet while Superior gives Nina an audience. It's a subtle but hilarious moment that balances what in other films would either be straight-up farce or a more serious and menacing moment.


Closure has some of the best performances of the year. Ojeda is just delightful as Nina, reacting as well as she can to the continuously oddball situations she finds herself in. She reminds me of Bonnie Hunt in her ability to play comedy by slightly under-reacting to things, a droll manner to the oddities she endures. However, Ojeda also excels in Closure's more dramatic scenes.

When Nina's lost luggage arrives, she quietly opens it. As we know it contains the urn with her mother's ashes, we are ready for Nina's sad reunion. As she clutches the urn, quietly weeping, it's hard not be moved.

Yasmina's eccentric spiritualism is performed by Addai-Robinson is such a flighty yet straightforward manner that you like her even as you think she's slightly cuckoo. Govich's ironically named Prudence also delights in her oblivious manner. Tubert's soft-spoken Iskander is comically menacing, and McCartney and Walsh make a great double act in these constantly bickering cops who suffer each other and a bothersome public that for some reason expects them to investigate missing women.

Both Sloan's Jack and Choi's Hugo are acted so well you do wonder whether Nina will or should choose either as a romantic partner. Sloan makes Jack a humorous figure, a man who endures his girlfriend's "polyamory" and vegetable meals when in reality he would rather have an exclusive relationship and a double cheeseburger. Sloan rattles off lines well, usually at Nina's expense as when he calls her 'a happy hooker' or tries to go along with Nina's plans only to find himself chased off when things are going well.

Choi similarly makes Hugo a sincere, nice man who under normal circumstances would be a good match yet finds himself unwittingly in the cross-hairs of what either he or Jack call "the Vagina Mafia".

Goldberg excels in circumventing expectations in Closure, whether in the conclusion of Nina's search or in the end of Nina's relationships with both Hugo and Jack. We do have a satisfying and surprisingly realistic ending, even if poor Nina had to temporarily became a hooker and was nearly murdered by a coke-snorting tap-dancing Judy Garland-loving cop.

Hilarious and heartfelt, Closure is a delight. Gently mocking that strange creature called a "Californian" while digging into the complexity of family relationships, you will laugh at the adventures of this stranger in a strange land while also feeling that her search ultimately helped her find herself.