The River and The Wall: A Review

THE RIVER AND THE WALL

Five somewhat wacky men and women travel down the Rio Grande that divides the United States and Mexico in The River and The Wall, looking at how the proposed border wall will impact this area. The scenery is beautiful, but this is not an objective film on this contentious issue. The River and The Wall is squarely opposed to having a physical barrier, though whether their opposition is based on ecological or political reasons is as open to interpretation as some of the vistas we are treated to.

Wildlife filmmaker Ben Masters is both director and one of the travelers on the 62-day journey from El Paso to Brownsville, Texas using a variety of travel methods. Along with National Geographic photographer Filipe DeAndrade, river guide Austin Alvarado, ornithologist Heather Mackey and associate director for the Texas Wildlife and Parks Association Jay Kleberg, our intrepid travelers use bicycles, horses, canoes and walk across the 1,200 miles.

There are interviews with two Congressmen that represent major parts of the U.S./Mexico border, failed Presidential candidate Beto O'Rourke (Democrat) and retiring Will Hurd (Republican), along with Mexicans they meet when they slide over to the opposite side and ranchers further down the Rio Grande. We see the beauty of some desolate places, along with some of the group's surprising incompetence when it comes to the journey.

Some of them find horse riding comically difficult, we see one canoe about to drift off when they are distracted by goats and have them face a conflict near the end when canoeing at night. They sense people are crossing but do not know whether to contact the Border Patrol or not, unsure if they are merely people crossing or drug smugglers plying their craft.

The building of a physical wall is a personal issue for two of our travelers as both DeAndrade and Alvarado were respectively undocumented or children of undocumented people. They tell us their tales as we keep going further across majestic scenery.

Finally, after two months, our five travelers finally arrive at the Gulf of Mexico, joyful to have made the journey.

It should be clear that The River and The Wall is squarely opposed to a physical barrier. Both O'Rourke and Hurd make cases against it, albeit from different points of view. We also see the impracticability of a physical barrier along certain sections of the border, particularly in the Big Bend Ranch Park and Big Bend National Park, with towering cliffs making the river highly impassible.

The River and The Wall's opposition, while couched along environmental lines in showing the damage such a barrier would inflict on the natural wonders we see, is also made clear by the sympathetic portraits of the DeAndrade and Alvarado stories. DeAndrade came with his mother from Brazil when he was six by flight and she deliberately overstayed her visa. Alvarado is the only natural-born member of his immediate family which crossed illegally from Guatemala. Both groups later became naturalized citizens.

That both the DeAndrade and Alvarado families violated the law is treated as a non-issue, an unimportant almost pesky detail. There were extenuating circumstances that justified such acts: family and national violence respectively. DeAndrade and Alvarado have the most overt reasons to oppose a wall, but every traveler has a motive to not want a physical barrier. 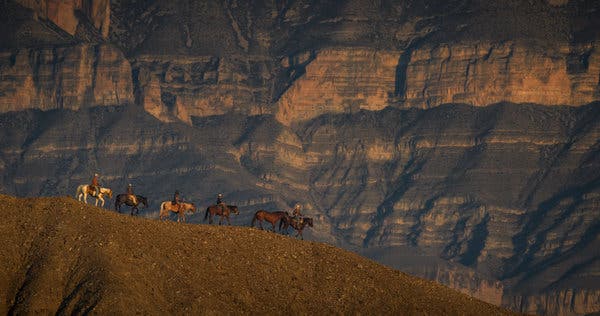 As such, The River and The Wall is not so much a documentary about this issue but about why we should agree with them in not building a wall. This is not to say that they do not make a very strong and/or good case against it or that they are wrong in their case. It is merely pointing out that The River and The Wall is not going to give any pro-wall building side even a modicum of a chance. Even when they enter the most dangerous part of their journey their bias shows.

The Mexicans happily fishing on their side of the river with its open spaces versus that blocked American side warn them of the dangers the Zeta drug cartel poses, telling them that they use that stretch to smuggle drugs. As they endure a frightening night, their struggle on reporting what activity they see or not makes clear they would have no issue letting those crossing the border enter. People bringing in drugs is another matter.

The O'Rourke and Hurd interviews are interesting in that we have two opposing forces surprisingly in agreement on certain points with regards to a physical wall. Both Congressmen come across as measured and sane, with no rancor towards the other, thoughtful and with some ideas that have common ground. The brief mention of a long-proposed bi-national park similar to the Waterton-Glacier International Peace Park along the U.S./Canada border is something I wish they had explored more. As a lifelong Texas resident, this is the first time I ever heard of such a plan.

As a side note, it's a pity to see O'Rourke sound sane given that his Presidential campaign collapsed in part due to some ideas so extreme even some of his fellow Democrats were aghast (such as his idea to remove tax-exempt status for churches that would not sanction same-sex marriages until they essentially came to heel with government policy).

The River and The Wall makes a very firm, strong and rational case as to the impracticality of building a physical barrier on the U.S./Mexico border. I think sometimes it could not resist gilding the lily with its position when visually the film makes a better case against the wall than some of their family histories did.

It's a good and necessary film even if at times it makes the travelers look like idiots (Austin shouting, "I'm officially in Mexico! Let's go get some tacos!" sounding particular boorish). The River and The Wall is not meant to be objective, but it is well thought-out and crowned with majestic images of a vast and wild area.