The tragedy and misery of Syria is chronicled in The Cave, a hard film to sit through. A follow-up to the 2017 Syrian documentary Last Men in Aleppo, director Feras Fayaad looks at things through a woman's view. The Cave does well when focusing on the horrors and few joys those besieged are going through. When it slides into displaying Arab/Islamic sexism things become curious.

We follow Dr. Amani Ballour, one of the few doctors still in Eastern Ghoula on the outskirts of Damascus, as she navigates not just attending to a variety of patients under extreme conditions but also just surviving the siege itself. Though there are facilities above ground, part of the hospital is also beneath ground in an effort to provide safety from the Syrian and Russian bombings.

While there are horrifying and tragic moments to suffer, there are moments of lightness ranging from a surprise birthday party for Amani to her continuously frustrating efforts to make good dishes with what rice and water they can find.

We also find that despite the dire circumstances, rampant sexism reigns. One frustrated man not only demands to speak to a 'male manager' because Dr. Amani cannot possibly be an administrator due to her gender. As if that wasn't bad enough already, that same man lectured both her and her colleague Dr. Salim Namour (who is male) about how Dr. Amani should be at home.

There is a contradictory feeling when it comes to The Cave. On the one hand, we need to keep hearing and seeing these type of stories. The horrors and tragedy that is Syria in the midst of the failed rebellion against the Assad regime needs to be at the forefront.

On the other hand, I think there's a sense of exhaustion about these types of stories. For eight years the world has watched as Syria has decimated itself. The monstrous acts of the Assad regime found an equally horrifying set of monstrous acts with ISIS, as if so many sides had a contest as to who could do more unspeakable crimes against humanity.

As a result, there is just a feeling that The Cave is almost a lecture, a scolding about our collective inaction. This sense of scolding and lecturing grows whenever we see and hear about the sexist patriarchy.

Intentional or not, there is a sense that The Cave loses its way when it focuses not on Dr. Amari's acts of courage but on how her gender affects others. After a rare venture outside beyond the hospital, Dr. Amari is clearly displeased when a fully-covered mother declines an offer to work at the hospital. The literally hidden woman remarks that the man would not like it. As they drive off, Dr. Amari's surprisingly controlled anger erupts. 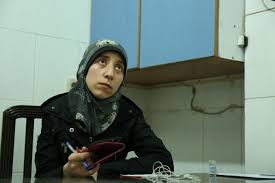 "Why can't a woman decide for herself and do what she wants to? Would that diminish men?", she rhetorically asks. Later on, she goes on "Do they have to keep making us feel inferior? Women can contribute".

It's a strange thing that amid the dead children and dismembered adults, Dr. Amari focuses on male stupidity. There is already enough horror going on around us in The Cave, and somehow the film loses focus on the misery in Syria when it pops in reminders on Arab Syrian men's toxic masculinity.

The despair Dr. Amani has is very close to the surface. At one point after seeing more dead and dying children, she all but snaps, "I don't know what makes people have children in these circumstances", a statement that so shocks her female colleague that said colleague immediately replies, "God forgive you for what you said".

The Cave is a strong survival tale, one that allows for moments of hope. Dr. Salim for example insists on playing classical music when in the operating room, his beloved Beethoven serving as respite to a slightly bemused, slightly disinterested Dr. Amani. We do hear a bit from her parents via telephone, her father encouraging her that she has done great things even after circumstances grow so desperate she herself has to flee. He reminds her not to focus on those she could not save but on those she did.

It is impossible not to feel great sadness and even get teary-eyed when Dr. Amani has to flee from a mother bewailing her dead son Eyad. Hearing Eyad's mother cry from the depths of her soul about how he has left her seems to shake Dr. Amani, whom we next see sobbing in her office.

The Cave is a hard but necessary film to watch, though weakened when it shifts to showcasing Arab/Islamic sexism. This is a portrait of true courage under fire, of a world that cares nothing about the miseries of those forced underground. "It's like living in a grave", Dr. Amani observes. Whether there will be a Resurrection we do not yet know.