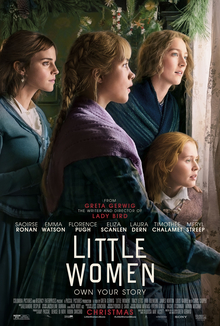 This latest version of Little Women has some new elements within it that distinguish it from almost all others. First, it is the second adaptation to have a female director though the first to have that director also be the screenwriter (Greta Gerwig). Second, it is performed by actresses who would have more likely grown up with that female-directed version as 'their' version rather than the previous ones. Third, it is the first Little Women to have all of the all-American March sisters be played by non-Americans*. Fourth, this adaptation comes at a time when the role of women on and off the screen has come to the forefront. How can a text well over a hundred years old still work today?

Using a nonlinear structure that takes us from "present day" to seven years earlier and shifting hither and yon between, we see Jo March (Saoirse Ronan) already in New York as a struggling authoress. She does have some interaction with Professor Friedrich Bhaer (Louis Garrel), but not much to speak of.

We float between the other sisters and their lives present and past. There's Amy (Florence Pugh), in Europe studying to be a painter under the watchful eye of the haughty Aunt March (Meryl Streep). While there, she entertains the wealthy Fred Vaughn (Dash Barber) but cannot shake the March family friend Theodore Laurence, generally known as Laurie (Timothee Chalamet). There is also Meg (Emma Watson), struggling to keep house and home when once she aspired to marry well only to marry for love. Finally, there's the memory of Beth (Eliza Scanlen), the shy March sister who eventually dies.

As we go from the past to the present to the future past, our four "little women" under the watchful eye of their beloved mother known as Marmee (Laura Dern), love and fight both among each other and with those around them as they strive to be themselves.

I think the most controversial element for this adaptation is Gerwig's decision to make it nonlinear, going from present to past and shifting back and forth. Perhaps someone who has never seen any version of Little Women will not find it as troubling or unnecessarily convoluted as I did, but for myself, there is more than just the loss of a straightforward narrative that left me cold.

By shifting our story back and forth, I think we lose what could be a stronger connection to the March sisters. It almost seemed as if Gerwig opted to film Part 2 of Little Women first, then move on to Part 1. It's hard for me to judge how successful the time shifts are given that I already knew the story, but by going back and forth we lost something. The sisters seem if not strangers at least not as close as perhaps they should be.

Take Beth for example. The sisters all rally to her side when she first gets scarlet fever, making her death all the more tragic for them all. Here, we shift from when she is dying to when she became sick. Gerwig made the deliberate choice of echoing scenes from both moments in the film, but in doing so she made the tragedy less impactful. Not that it wasn't impactful, but it was just less impactful. 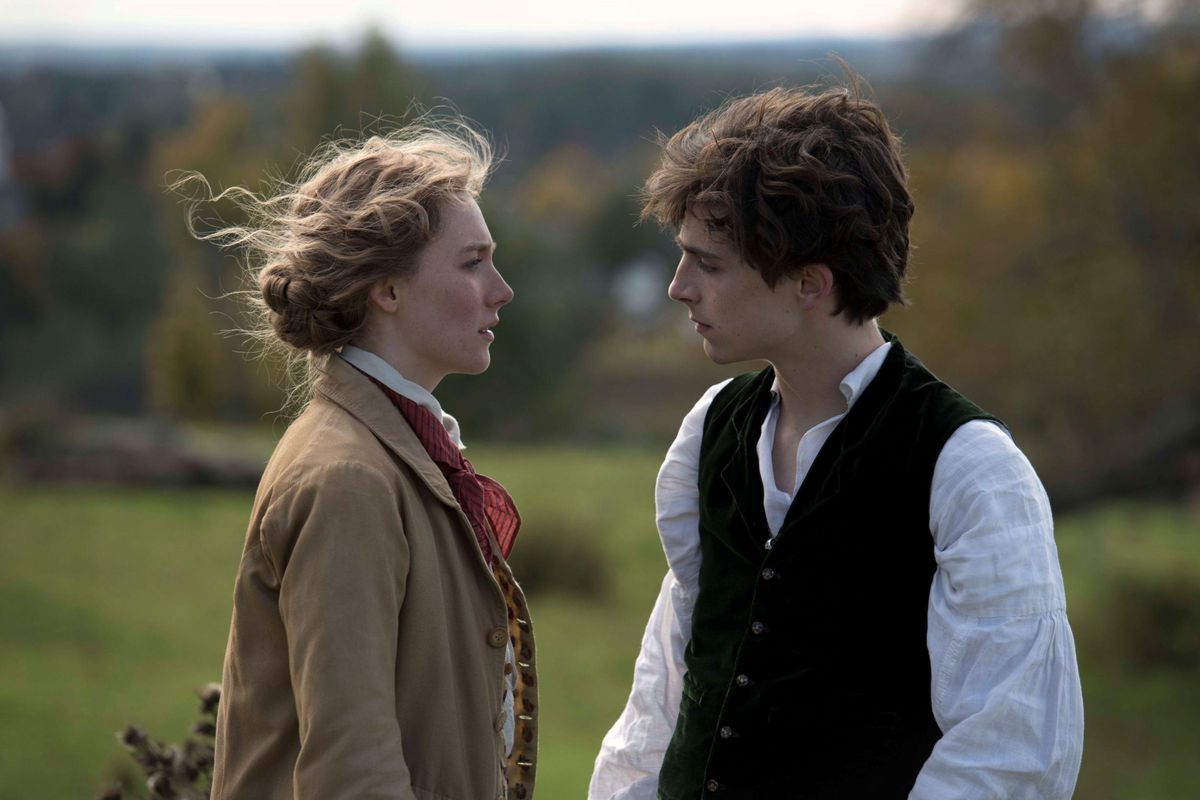 One thing that did surprise me was in how Gerwig opted to make Little Women more about Amy than about Jo, almost to where we could have dropped our boisterous tomboy/aspiring writer altogether. Laurie may say he was in love with Jo, but as played by Chalamet he seemed pretty happy to jump from one March sister to another. While he spent more time with Amy in Europe than with Jo in America, he seemed oddly flirtatious with Meg at her debutante ball. When he drunkenly crashes a party, Amy reprimands him while mentioning he still has Jo's ring. Curiously, we see her give Laurie this 'talisman of love' later, and almost as an afterthought, with little to suggest he held this token dear to his heart.

Whether Gerwig wanted to focus more on Amy and Laurie to counterbalance the criticism of how their romance seems absurd in the book or not I cannot verify. What I can say is that for all the protests of love Laurie may make, he seemed oddly detached from Jo. When near the end of the film he proposes marriage, he doesn't seem all that enthusiastic about it. In fact, he seems almost bored with the idea, and he didn't look that much in love with Jo if at all.

Gerwig also appears to be aiming to make The Louisa May Alcott Story versus an adaptation of her most celebrated novel. At the end of the film, as Jo haggles with her editor on her book, "Little Women", she essentially says if she is going to marry off her main character against her wishes, she might as well make money off of it. At which point, she agrees to change the ending to have Jo run to catch Bhaer and kiss under the umbrella. 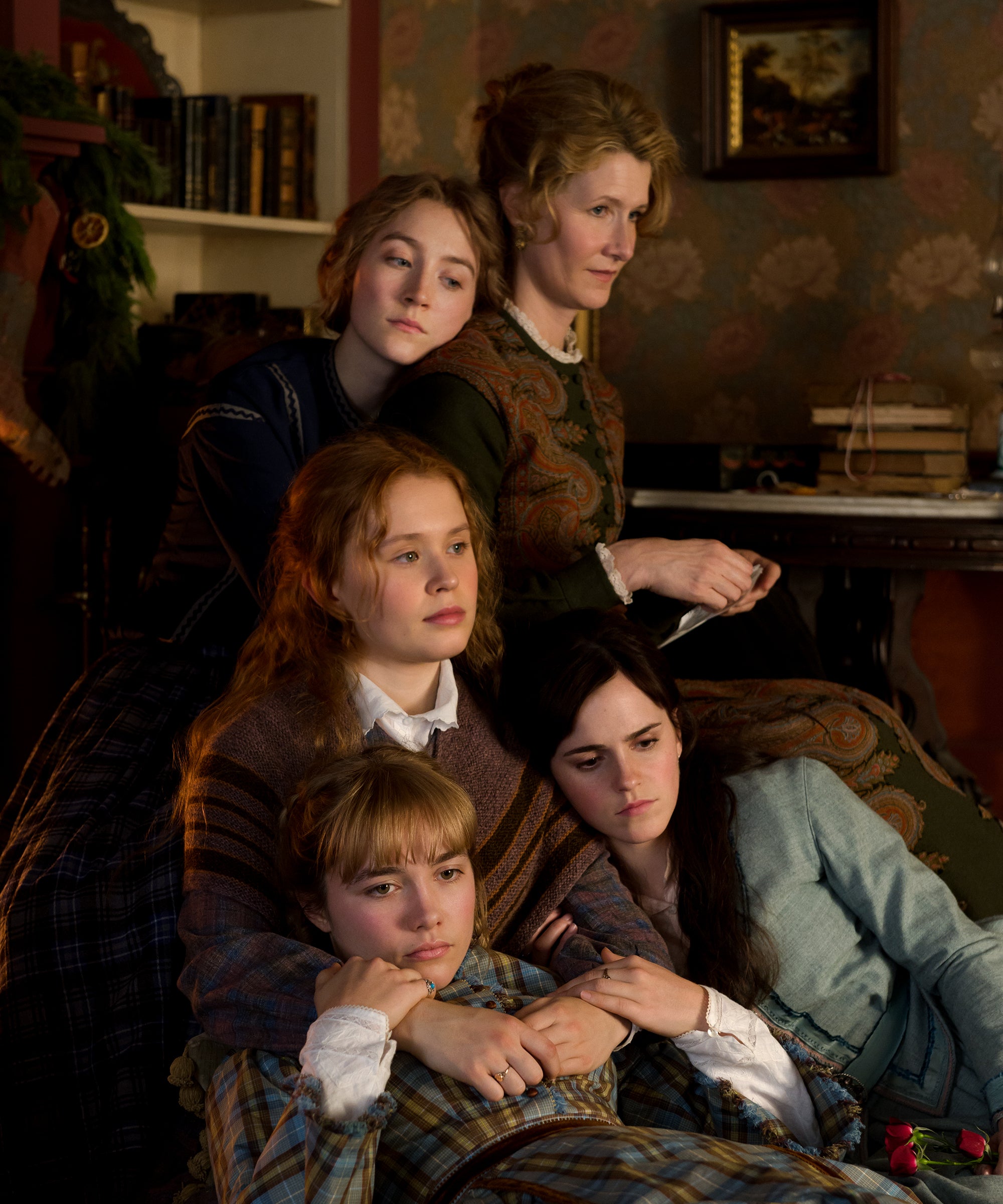 Was Gerwig attempting to be meta with Little Women? Was she shifting from the text itself to essentially winking at the audience and suggest the whole thing was just silly? It might explain why Bhaer is superfluous to this adaptation, perhaps more so than in the book. However, was he there because audiences expected him to be?

It's not a slam on Garrel, who while pretty is not as pretty as Chalamet and is more French than German. However, perhaps it would have been better to just go for it and change to text altogether to give Little Women the ending Alcott wanted: a single Jo. Chamalet was as mentioned extremely pretty but I didn't see Laurie as a wounded romantic or particularly close to the Marches. He was just there.

I would say that Pugh gave a fine performance as Amy, the one who knows she has to marry rich since as a woman she has no rights and little to no prospects for her own income. Her Amy could be nasty and arrogant but also touching and kind. I would also say that she is not a supporting role...she is a leading role. Pugh's story to my mind takes more precedence over Jo's, which to me is a radical departure. 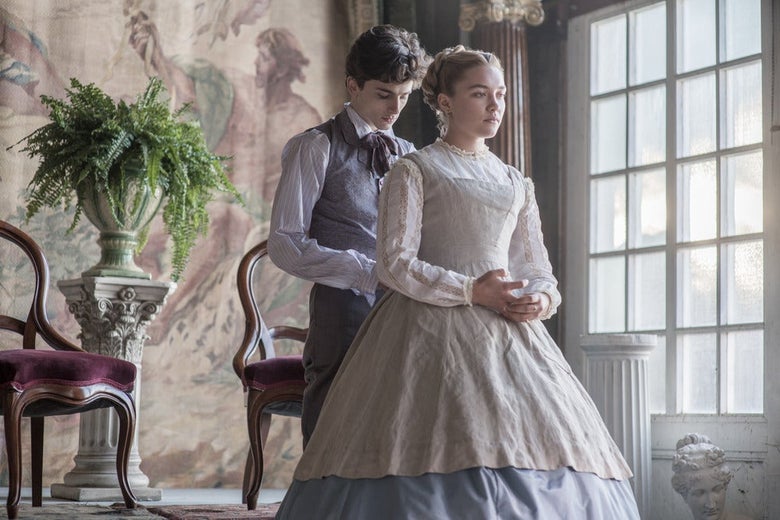 Ronan's Jo is equally good: strong, perhaps a bit arrogant in being unable to take the slightest criticism, but equal to any man. Watson, to her credit, has improved her American accent though her scenes of romance with John Brook (James Norton) felt a bit overacted to me. Streep was pretty good as Aunt March, not as tyrannical as in the past but not as sensible as she thought she was. I don't have many memories of Scanlen, and despite what I have heard I was not won over by Dern's Marmee.

One scene did strike me as odd. She's handing out blankets to soldiers and their fathers when she observes, somewhat angrily, "I've spent my whole life ashamed of my country", to which an African-American woman also helping distribute blankets replies, "No offense, but I think you still should be". Given that her husband (Bob Odenkirk) is at the front lines of the Civil War, fighting to end slavery, it seems a very odd and random observation.

If one thing truly elevates Little Women, it is the production itself. Alexandre Desplat's score is pure perfection as are the costumes and sets.

Little Women works well enough, but my issue is in how Gerwig opted to structure her version to where I wondered whether she was telling Jo March's story or Louisa May Alcott's story. It certainly has fine performances and a beautiful score, and perhaps because unlike many viewers I have seen three versions that predate 1994's I see things others may not; on the whole though this for me is the weakest version. Note I did not say the worst or a terrible version, just not the one I would want for my daughters...and sons.

*While Saoirse Ronan was born in New York City and is American by birth, she is Irish by nationality. Watson and Pugh are British and Scanlen is Australian.