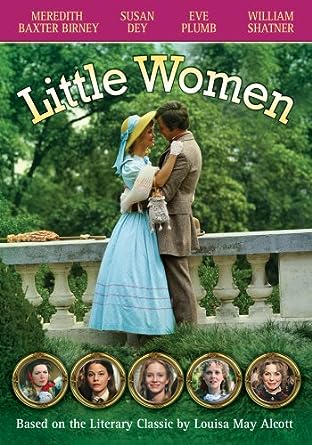 Many thanks to Kristen Lopez at Journeys in Classic Film for including me in the Summer Under the Stars Blogathon.  Today's star is Greer Garson.

The television adaptation of Little Women marked the farewell performance of Greer Garson, one of MGM's grande dames known for her sophisticated, and oh-so-proper British elegant manner.  Apart from a guest spot on The Love Boat, this would mark the final time Garson performed.  As a minor character from the Louisa May Alcott novel, her role wasn't large, but it fit well into the miniseries.  I've no way of knowing if this version of the classic novel sticks close to the original.  I will say that the performances are hit and miss, but it has other positives that elevate it.

The March sisters are living life the best they can as their father serves as a Union chaplain during the Civil War.  Chronicling life is Jo (Susan Dey), who dreams of being a writer.  There is her older sister Meg (Meredith Baxter Birney), who yearns to be a grand dame and is considered the family beauty but whose poverty is a hindrance to her aspirations.  Amy March (Ann Dusenberry) is a bit of a flirt but highly immature and petty.  The youngest, Beth (Eve Plumb) plays the piano and is the most sensitive of them all.  Under the loving and watchful eye of Marmee (Dorothy McGuire), the March girls eke out a living the best they can while they keep going.

Across the street is Theodore Lawrence, better known as Laurie (Richard Gilliland), who lives with his very wealthy Grandfather James (Robert Young).  Grandfather loves Laurie but is also worried that he will become a wastrel, having already endured the loss of his daughter to an Italian named Senna (as this is Laurie's real surname though not used as Grandfather's insistence).

Jo, the most independent, bristles at having to keep Aunt March (Garson) company, especially since Aunt March pays so little and is consistently haughty, giving her disapproving advise at every turn.  Jo also almost loses Amy after she rejects her working with Jo on a book: Amy painting, Jo writing.  In revenge, Amy burns Jo's book, an act that shocks everyone and enrages Jo.  In a desperate effort to make amends, Amy seeks out Jo and Laurie, who have gone ice skating.  Amy falls through the ice and nearly drowns, and a repentant Jo realizes that her war had gone too far.

Life continues, though with great struggles.  Laurie and Grandfather's relationship is strained, and Beth gets the scarlet fever and nearly dies.  This on top of their father becoming ill and Marmee having to rush off to Washington for him.  Aunt March helps financially, but Jo's anger at Aunt March's comments nearly cost them the cash.  Jo makes her own sacrifice, cutting her hair to raise more money.

While Meg falls in love with the dashing Union officer John Brooke (Cliff Potts), Jo still cannot think of herself as marriage material.  In fact, she turns down Laurie's proposal, insisting he can find better (though in today's terms, we'd say he was put in the 'friend zone').  Angry, he takes up his grandfather's offer to go to Europe.  Jo's anger issues cost her a trip to Europe too, when she tells Aunt March off, the latter decides to get Amy to be a travelling companion for her friend rather than Jo, whom she had originally chosen.  With Elizabeth still weak from her scarlet fever and Meg married (on the day of Lee's surrender no less, turning it into a great celebration), Jo decides to go to New York and be a governess.

There, she meets Professor Friedrich Bhaer (William Shatner), whom she is fond of, even if he lets on that he isn't fond of Jo's writing (though he isn't aware that 'J. March' is his next-door neighbor).  Meg gives birth, which calls Jo back to the Concord abode.  Jo and Beth go to the sea, a mutual dream of theirs, but Elizabeth acknowledges what Jo won't: that Elizabeth is dying.  Professor Bhaer doesn't write as much as he used to, and Amy, to her own surprise, not only finds Laurie in Europe, but discovers that he now is in love with her.

When they return to Concord, Jo learns that Amy and Laurie are now themselves married.  Still, any dreams of Jo being a spinster are gone, as Professor Bhaer has arrived for Christmas, the promise and hope of love still there. 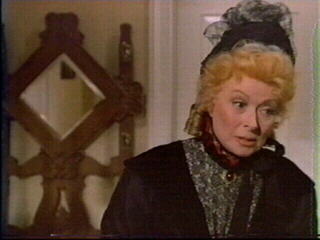 It is interesting to see so many people early or late in their careers.  As noted, this was Garson's final major appearance, and in it she played the haughty Aunt March with a clear, arrogant manner, which I think was the correct way of dealing with this character.  However, to her credit Garson did show that there was a bit of a heart beneath the harsh exterior.  As a member of the family, she attended Margaret's wedding (Aunt March always called the girls by their full name), and when everyone learned that the war was over just before the toasts were announced, Garson gave a short yet lovely and beautiful toast.

We also saw Robert Young in a bit of a departure from his normal roles as the somewhat gruff Grandfather.  I think this is one of his better performances, as he made Grandfather Lawrence into a believable person: not a tyrant who berated his only heir, but not an overtly avuncular and sweet man.  He could be sweet and sincere, such as when he invites Elizabeth to use his piano anytime, but he could also be stern and serious, so much so that when he hears the piano and thinks its Laurie goofing off, he starts barking out orders to stop, terrifying Elizabeth into running off.  The look of shock and regret at his snapping is clear on his face.

Another star from the Golden Age, Dorothy McGuire, wasn't particularly great as Marmee, but she had her moments of tenderness.  One of her best was when she advised Jo to forgive Amy for burning her book, offering that the loss of a sister is greater than the loss of a book.

In the younger, we can see a surprising albeit small turn from Star Trek: The Next Generation's Q himself.  John De Lancie plays a British courter of Amy, and as you look at him you begin to wonder where you've heard that voice before.  After seeing him in Little Women, it is surprising that Richard Gilliland didn't become a bigger name.  The camera focuses lovingly on his intense blue eyes, and even though he looks a bit old to be a naïve young man (he was 28 at the time), Gilliland did a strong job as the earnest young man who loves Jo (him loving Amy, though, didn't seem believable).

Again, not having read the book, I cannot say whether that stays true to the story, but after spending so much time with Jo, his romance with Amy seems beyond whirlwind. 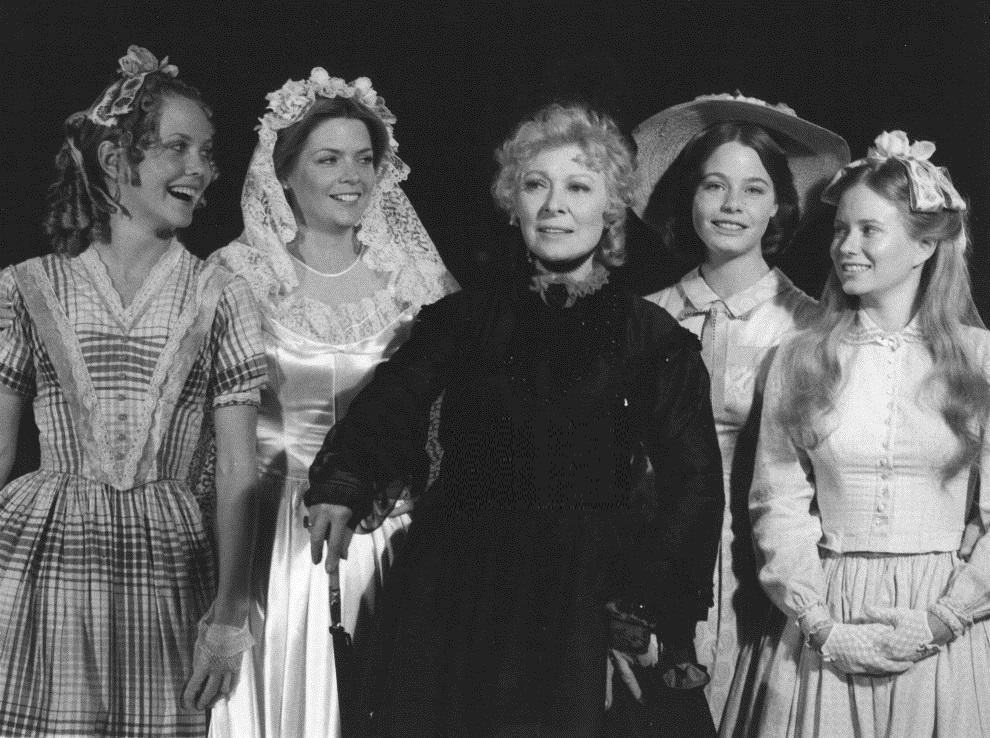 As for the March sisters, I think Baxter-Birney did the best as the elegant beauty Meg.  She made her aspirations to a better social standing really stand out.  Plumb, now notorious for "Marcia! Marcia! Marcia!" of Brady Bunch fame, was surprisingly gentle as the delicate Beth, with barely a hint of her infamous 'middle child syndrome'.

Dusenberry was a bit of a nonentity in Little Women to where I barely remember her.  In regards to Dey's Jo, part of me thought she was too beautiful to be considered the plainer, more assertive March sister.  I don't think Dey is a particularly good actress, having a more gentle manner than perhaps Josephine should have.  However, as the miniseries progressed I think she grew on me.

What didn't grow on me was Shatner, adopting the worst Deutsch accent in television history.  It was painfully bad and obvious the only thing German about Shatner was Black Forest Cake.  It just wasn't a bad accent he was carrying.  It was just a bad performance, so much so that one is really left scratching their heads wondering why Jo would turn down Laurie but be enthralled with Bhaer (who didn't even like her stories).

Little Women has beautiful music courtesy of Elmer Bernstein, who can be counted to create the perfect mood whether it calls for action or lightness.  The sets were obviously stage-bound (especially anytime the characters were meant to be in a park or ice skating pond, though there was location shooting), and the sets and costumes were nice (the former winning the miniseries an Emmy).

Little Women is a decent enough adaptation, though whether the fact they have more time than a feature film made it feel longer or richer depends on individual tastes.  On the whole though, with some good performances, I think it will be a good introduction to the classic novel.