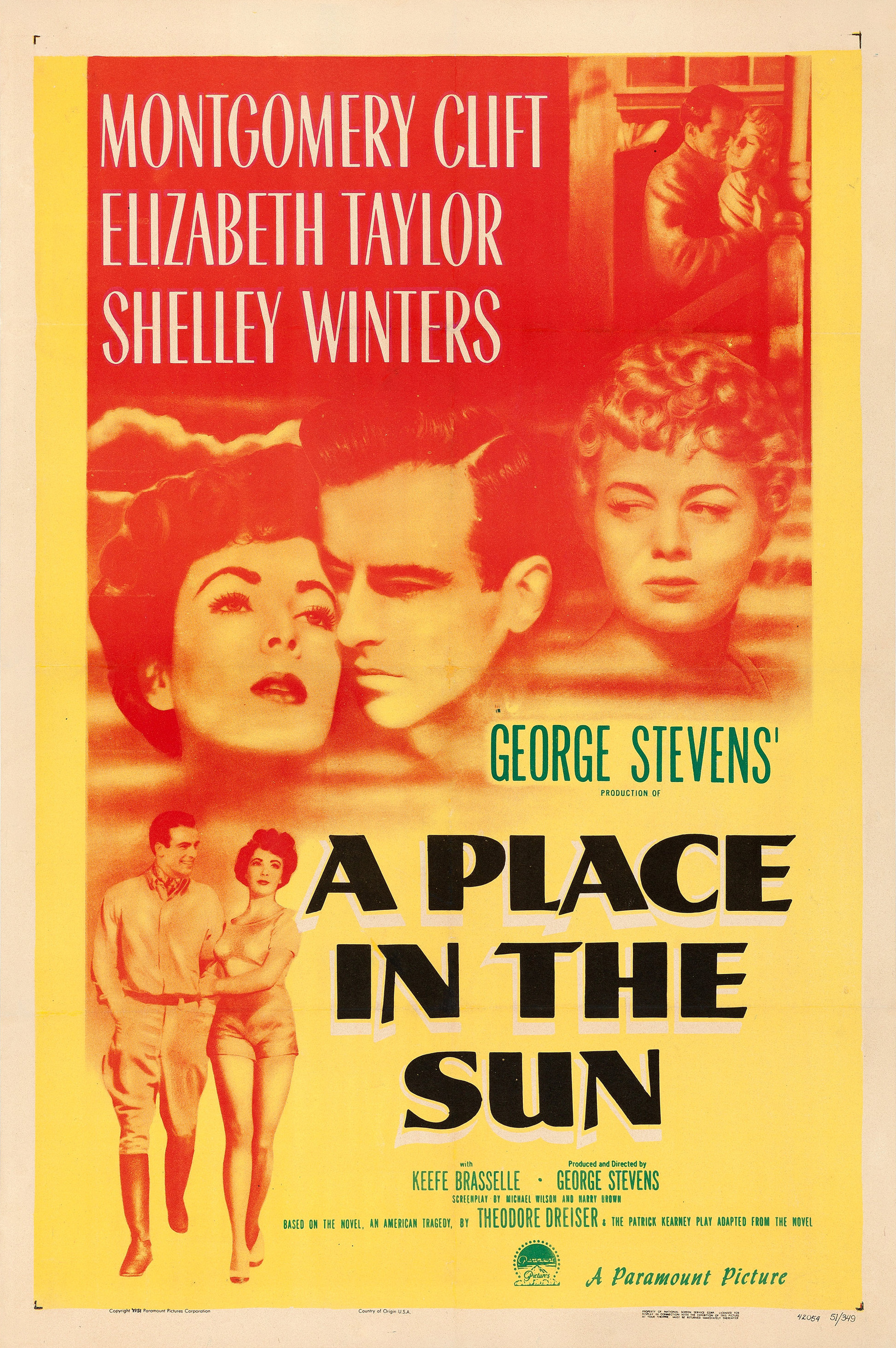 A PLACE IN THE SUN

This is part of the Summer Under the Stars Blogathon sponsored by Journeys in Classic Film.  I'm grateful to Kristen Lopez for allowing me to participate.  Today's star is Elizabeth Taylor.

Has there ever been a more beautiful motive for murder than Elizabeth Taylor?

A Place in the Sun, George Stevens' adaptation of Theodore Dreiser's An American Tragedy, is both a sweeping love story and an exploration of societal ambition in both the glories and darkness of that uniquely American ideal of 'upward mobility'.  Both a glorification and condemnation of constrictive class structure, the performances in the film make one both melt in admiration and mourn the inevitable clash.

George Eastman (Montgomery Clift) is the poor relation to wealthier relatives, his parents being somewhat the family eccentrics for their excessive religious work.  Still, he's a relation and is put to work at the lowest level of Uncle Eastman's factory.  There, he meets pretty Alice Tripp (Shelley Winters), whom he starts dating despite the company rule against staff relationships.

Still, George yearns to be among the vaunted upper class his cousins are in, and on his birthday (which the Eastmans don't remember), he's invited to a soiree.  Still a bit removed from the rich society members at the party, he does find one person interested in him: Angela Vickers (Taylor).  Our raven-haired, violet-eyed beauty is fascinated by George: his gentleness, his manner, and she soon falls in love.

George has been in love with Angela since he first spotted her briefly when she came to see the Eastmans on his first day in town, though she took no notice of him then.  George and Angela fall madly in love despite their different backgrounds, but there's a hitch.

Alice finds herself pregnant, or 'in trouble' to use the term of the time. 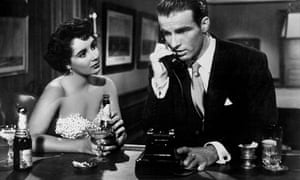 Now George finds himself in a terrible situation: his deep passion for Angela (and the world she lives in) versus his impending fatherhood for Alice's baby (and the world they come from).  Angela knows nothing of George's double-life, but Alice does.  George stalls for time, insisting that with a new position at the factory it might be beneficial to keep things as they are.

However, things can't stay as they are with a baby on the way, and an Eastman no less.  George's situation grows more precarious every day, between his deep love for Angela and that world and his responsibility to Alice and theirs.  Something has got to give.

Alice forces the situation when he calls up the Vickers' estate where George and the other Eastmans are enjoying the Labor Day holiday.  She insists that George come pick her up at the bus station and marry her, and if he won't, she'll tell all.  It couldn't have come at a worse time for him, as Uncle Eastman was coming around to move his nephew further up and Mr. Eastman seeing George as a good husband for his daughter, Angela's parents now warming up and not objecting to the relationship. George leaves, telling them his mother is ill.

George gets an unexpected break when he and Alice find that the Courthouse is closed due to Labor Day.  To make up for it, George suggests a picnic and rowboat trip to a secluded lake.  Alice, who cannot swim, accepts.  George struggles with the idea of murdering Alice, which he has planned or contemplated for some time.  He finds that in the end, he can't go through with it, but Alice still manages to fall overboard and drowns.

George attempts to cover things up, but pretty quickly Alice's body is found and the trail leads right to George.  At his trial, District Attorney Marlowe (Raymond Burr) is convinced it was premeditated murder, a charge George denies.  In the end though, he is found guilty with Angela's unwitting involvement kept out of the papers to spare her the scandal.  In the end, as he's about to be executed, Angela does make one last visit to the prison to say goodbye to her great love. 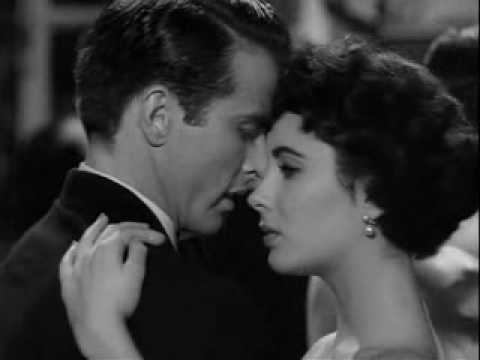 It takes a great deal of talent to make someone as unpleasant as George Eastman sympathetic, almost tragic, and yet Montgomery Clift did that by showing Eastman not as a calculating figure but as perpetually ill at ease.  From the moment we first see him, with his jacket and t-shirt, we can admire the beauty of Clift, this beautiful rebel who yearns for that 'place in the sun'.

Clift's performance is pitch-perfect, how he holds himself slightly back whenever he's with his wealthier relatives, his soft manner with Alice (at least in the beginning) and his passion for Angela Vickers.

The scenes between Clift and Taylor are so filled with passion, almost a barely contained frenzy coupled with their exquisite external beauty that you get swept away as well.  It is easy to understand why Angela and George fell madly, passionately, totally in love.  It's more than just their physical beauty.  It's finding in each other what they did not have.  For Angela, it's someone who loved her the individual, not the money (though it helped).

For George, it was the world Angela lived in, the promise of a golden world.  Angela is that not-so-obscure object of desire, that ethereal world of joy, bliss, peace and freedom that he had never known his whole life.  She was the polar opposite of schlubby Alice, who was sweet and kind but who also would tie him down to another generation of poverty.

To have this goddess so close, this goddess love him, and to lose it because of a past romance with unintended consequences...we can see why any man would kill to be with Angela Vickers.

Taylor, I don't think, ever gave herself credit for being a good actress.  She proved her critics wrong with her definitive performance in Who's Afraid of Virginia Woolf? but she more than holds her own in A Place in the Sun.  As the carefree bon vivant Angela, she captures innocence without coming off as flighty or frivolous.  Angela is a woman who loves deeply, who sees in George someone not just beautiful outside but inside.

It helps when you have Franz Waxman's lush romantic score to fall in love to.  That sweeping nature of George and Angela's romance, coupled with Waxman's Oscar-winning music, just carries one into such passion you fall into them as well. 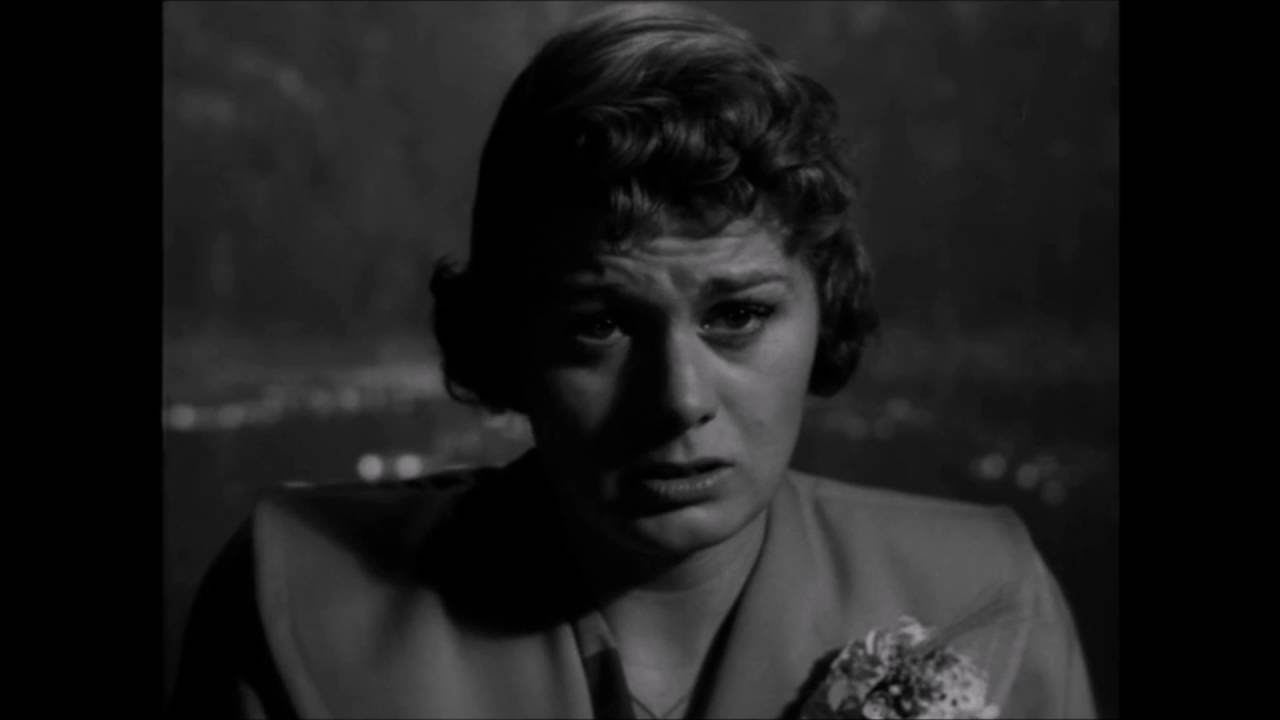 It's to where you forget that there is anyone else, which is what George did when it came to poor Alice.  For those who remember Winters as the fat, frumpy lady who was a good swimmer, it may surprise them to see her as a demur yet determined girl.  More surprising is to learn that prior to A Place in the Sun, Winters was known as a 'glamour girl'.  Here, she gives a whole new side and range to her acting abilities, making Alice into a sad girl, neither wimp or harpy.

If anyone gave a bad performance, I would say it was Burr as the District Attorney.  With his cane and theatrical manner, Burr seemed to devour the scenery in one gulp (and no, that was not a Raymond Burr fat joke).

George Stevens' directing not only drew out great performances (though Burr seemed a bit out of control), but he had wonderful mise-en-scène that was intelligent without being wildly overt.  There is when we see outside George's apartment the "Vickers" sign blinking, either from the Vickers Hotel or Department Store, suggesting how the entire Vickers world, and Angela herself, light him the way to a whole new world in the way Jay Gatsby's green light was so close yet far away.  Later on, when we see George struggling over what to do about Alice, above him is the portrait of the doomed and drowned Ophelia from Hamlet, suggesting that perhaps he contemplates a similar fate for his troublesome lover.

It's not too subtle as to be entirely missed, but it's not so overt that it screams out at you.  It's balanced just well enough to work without being over-the-top.

A Place in the Sun is sweeping in its doomed love story, the beauty of Montgomery Clift and Elizabeth Taylor being put to fine use.  It is also an exploration of the lengths one will go to obtain that object of desire, that dream of something so removed from us that one would go to any lengths to obtain it.  It's a tragedy and a romance, and sometimes the two go together.

One cannot help surrendering when one hears "Tell Mama...Tell Mama all".