I imagine that there is something bad about being outed before you are ready to make it public.  Poor Mayor Oswald Cobblepot has suffered that fate, and at the hands of the always Bonkers Babs, no stranger to 'the love that dare not speak its name'.  Time Bomb has some good and bad performances, some nice twists, and some moments in between.

People are being targeted all over the place in Gotham City.  Someone tried to blow up the car of Mario Calvi nee Falcone (James Carpinello), which would have taken out his fiancee, Lee Thompkins (Morena Baccarin).  Don Falcone (James Doman) is not amused, but he agrees to give Detective Jim Gordon (Ben McKenzie) one day to investigate before he unleashes Hell.

Gordon's investigation leads him to two conclusions: Mario, not Don Falcone, was the actual target, and Mario is hiding something.  Mario also wants to be a target if it means Lee will be safe, but there's still something amiss.  On her way to the rehearsal dinner, Lee says her piece to Jim, but when Mario sees Lee leave the apartment, he suspects the former lovers had a tryst.  This is the worst time for hoods to try and assault him, for we find out what we had suspected: somehow, Dr. Mario Calvi has the Tetch virus himself.

Falcone too knows who is after his son, and goes to the source: The Court of Owls, warning them to stay away from his son or else.  They assure him that Mario is safe...for now.

Meanwhile, we have two other plots spinning.  The first involves Edward Nygma (Cory Michael Smith), who is now working out his revenge on Butch Gilzean (Drew Powell) and his lover, Tabitha Galavan (Jessica Lucas).  He's managed to capture them and is now doing sadistic tortures with the ultimate aim of killing one or both for the death of Isabella, whom he blames them for.  Butch and Tabitha truly do not know what he is referring to, but Nygma will not be denied.  Out to stop him is Barbara Kean (Erin Richards), who goes to none other than Oswald Cobblepot aka Penguin (Robin Lord Taylor) for information. Penguin knows but won't say, but for once he is in for a big surprise.  Barbara bribes the maid for information, and soon finds that Pengy is in love with Nygma, delighting our Bonkers Babs.  A little more work gets her the address where Nygma had some S&M material sent, which he's using to torture our two lovebirds.  Nygma gives them the final test: he will put Tabitha's hand in a miniature guillotine with a button that will stop the blade from falling.  That button, however, will pump Butch with a lethal dose of electricity.  An enraged Butch finally 'confesses' to killing Nygma's girl, but when he tries to taunt him by saying he put a bullet through her head right after she said she wished she'd been with a real man, Nygma is puzzled.

Why would Butch say he shot her when she was killed by faulty brakes?  It's only then that he realizes his deductions were wrong, but too late to save Tabitha's hands.  Already in a daze when he puts two and two, in busts in Babs.   Nygma, too stunned by his mistake to genuinely notice the gun, tells her that she ought to put Tabitha's hand on ice before walking away.

At the hospital, Butch too swears war, but Barbara tells him they won't need to have one, because she knows who killed the librarian.  She also tells Butch when he suggests that having two women in love with Nygma is just nuts, 'what makes you think it's a woman?'

Finally, our Bloodhound Gang of Bruce Wayne (David Mazouz), Selina Kyle (Camren Bicondova) and Ivy Pepper (Maggie Geha) are looking into the mystery of the rusty key.  This leads them to both The Whisper Gang and to the Court of Owls.  The former, headed by Ukrainian Luka Volk (Costa Ronin) were master smugglers who joined the latter but were somehow betrayed by them.  Now they seek revenge by getting at something that terrifies even the Court.  They need that key to do so, and Bruce gives it to them in exchange for Ivy, who has used her horticultural skills on Alfred (Sean Pertwee).  Volk however, is done in by a Court-appointed assassin who gets the key.

Time Bomb had a surprisingly bad turn by Cory Michael Smith as Nygma.  It does seem a bit hackneyed to have Butch and Tabitha so easily captured (Nygma managing to track them down due to Butch's love of a particular dish delivered to his hideout on a regular basis).  It also makes me wonder whether Todd (Brian Charles Johnson), the sole employee at Stocks & Bondage, could have been so stupid as to allow himself to be locked up in one of the S&M contraptions, even if it was the beautiful Barbara asking him to.

I just thought, what would have happened if he had declined to show her how it works?  I'm sure she would have found another way to get into the safe that held the directions.

Time Bomb also had unintentionally funny lines and situations.  When Gordon tells Falcone that Mario is at the GCPD, he tells the mob boss that his son is safe.  I thought, the GCPD HQ is one of the LEAST safe places in Gotham (it's been attacked at least twice if not more times).  Seeing swordsmen on motorcycles attempting to slash Mario is a bit amusing, though as of yet we don't know why specifically he's targeted or how The Court of Owls got involved in all this.

Hopefully they won't slip into One Gotham Hill territory. 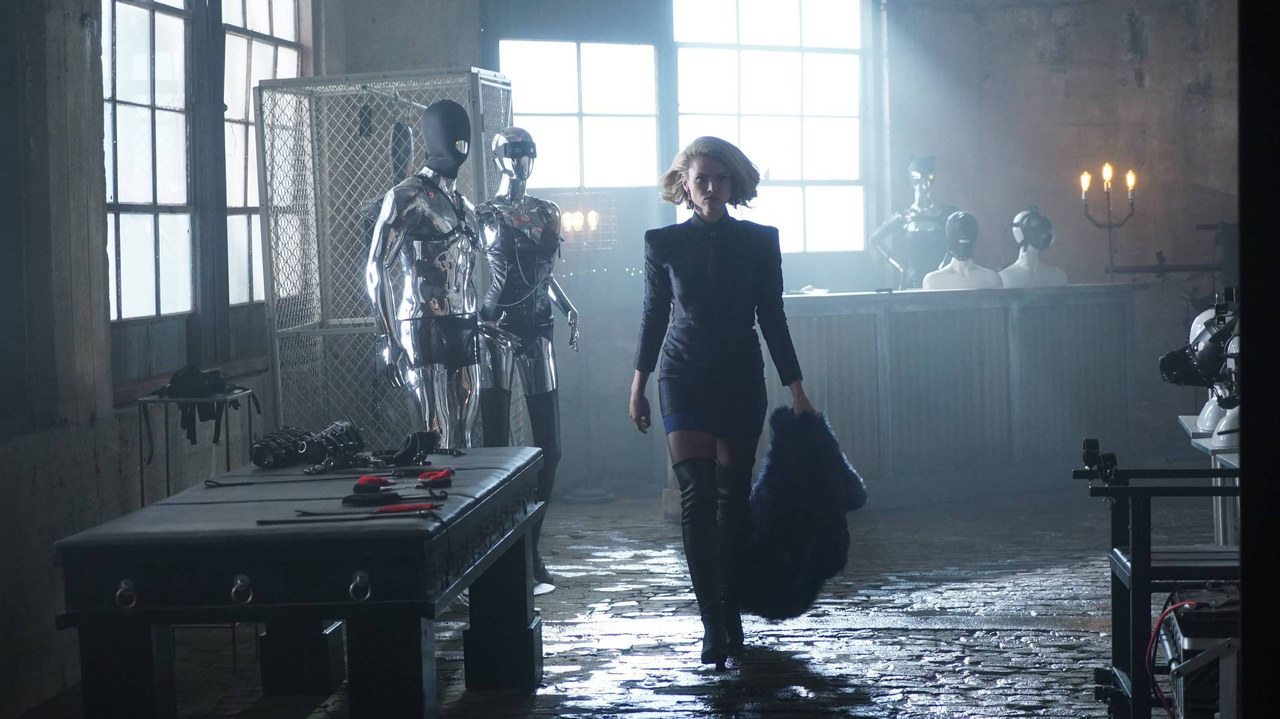 However, Time Bomb does have some really strong performances.  I was particularly impressed by Mazouz, who has a quiet confidence and command as Bruce Wayne.  You can see him slowly evolving into The Dark Knight, his cool steadiness and presence so strong.  He and Bicondova continue to work so well in this Bat-Kid/Kitten dance d'amour.  Ronin, taking a break from Soviet espionage on The Americans, made Volk into a strong character who was not afraid of the Court.  I should add points for having him be in something called 'the Whisper Gang' without breaking into fits of laughter.  I would have liked him to continue, but Lenin Calls.

RLT and Richards worked well together in their Mexican standoff.  Richards has been a knockout ever since Barbara went Bonkers, proving that it can be much more fun playing the villainess than the heroine.

Time Bomb is putting things together quite well, building on intriguing mysteries: who wants Mario dead? what is the Court of Owls hiding?  how do they play a role with Mario? what will Edward do when he finds who is really responsible for Isabella's death...and why?  Those aspects, and continued good work from the likes of David Mazouz and Erin Richards, lift the episode.  Blending all together, Time Bomb is a strong way to enter our future episodes, and hopefully the quality will continue.

Next Episode: Beware the Green-Eyed Monster
Posted by Rick at 10:24 AM