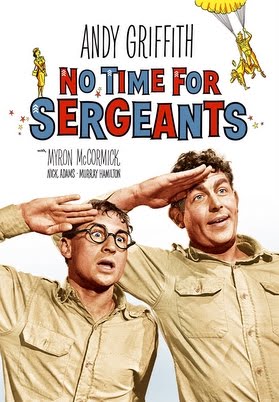 It's a most fascinating turn of events when it comes to No Time For Sergeants.  The television play adaptation was hilarious, and proved so successful that it was expanded to a full Broadway production.  That production, in turn, was made into a feature film, with Andy Griffith doing his third turn as our sweet-natured country bumpkin (having performed it in the television and Broadway play).

Following the same plot as the television play, William Stockdale (Griffith) is a country boy from the backwoods of Georgia.  His Pa (William Fawcett) had been hiding his draft board notices, leading the Air Force to think he was a draft dodger.  Finally getting him to the training camp, Stockdale runs afoul of hotshot ROTC cadet Irving Blanchard (Murray Hamilton) but befriends fellow cadet Ben Whitledge (Nick Adams).

They all meet Sgt. King (Myron McCormick), who just wants an easy life with the draftees before they head on out.  Stockdale, however, will not make life easy.  He doesn't mean to cause harm, but his honesty and overenthusiasm for things inevitably get King in trouble.  When King makes him 'Permanent Latrine Orderly' to get Stockdale out of the way, Stockdale takes it as a great compliment and honor.  He cleans the latrines so well he proudly tells Whitledge he rubbed the words 'Hot' and 'Cold' off the faucets.

Whitledge dreams of going into the infantry versus being an 'Airman', but he finds that he too is affected by the actions of our good-natured rube.  King is cajoled into getting Stockdale to take the battery of tests to move him on out, which Stockdale manages to pass despite his oddball manner.  In one spectacular fiasco, Blanchard and King try to get Stockdale drunk, only to end up drunk themselves while Stockdale, Rasputin-like, manages to keep drinking without it affecting him.  This ends up in King losing his stripes.

Finally, Stockdale manages to get into the Air Force, with Whitledge turning out as a frenemy and King managing to become a general's aide.  King's incompetence and impatience has the crew that has Stockdale and Whitledge fly off without a radio controller, which leads them to fly directly into the path of a nuclear bomb test.  The end result is the plane catching fire, and Stockdale uses his parachute to launch himself and Whitledge out of it.

The Air Force, thinking they died, gives them posthumous medals, and all are horrified to find them back on the base.  To hush up a potentially embarrassing  situation, they are moved to infantry after all, which delights Whitledge (even getting a medal at Stockdale's insistence).  At long last, the Air Force is free of their accidental insanity.

Perhaps I can grant that in this case, familiarity breeds contempt.  Having seen the television play, I was familiar with No Time for Sergeants' story and saw where it was expanded (though I don't know whether the expanded parts were in the Broadway production too).  I think what happened was that because, unlike live theater or television, you can't have audience reaction in a film, the story suffers from having to wait for lines to hit the audience.  The film becomes slightly unreal and turns what was once naturally funny into farce.

I was puzzled by director Mervin LeRoy's decision to have Griffith break the fourth wall a few times when he also used voice-over.  The fourth wall breaking was a throwback to the television special and perhaps the play, but it seemed slightly out of place when we had voice-over and when we didn't.  It's as if LeRoy simply couldn't make up his mind which way he wanted No Time for Sergeants adapted, so he chose all of them.

The scenes that worked well live didn't seem to work well on screen, as if trying to keep to the original and expand the scenarios even more.  The series of bits where Stockdale goes through the battery of tests didn't make me laugh, and my theory is that the spontaneity was gone.  It looked a bit too rehearsed, too practiced.

It's not as if they were terrible: the bit with Don Knotts as the dexterity examiner showed the spark that would later bring the two together on the legendary Andy Griffith Show.  However, on the whole all the situations that were funny just kept falling flat. 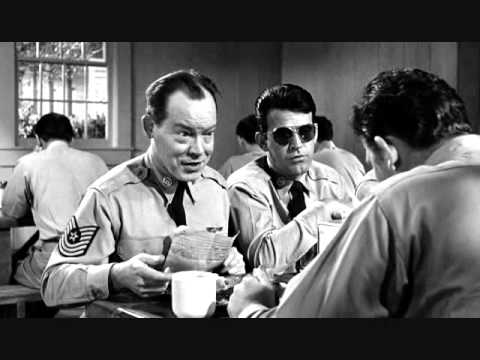 There was one exception: the first scene where Will finds himself going with the draft board man.  It showed a nice, gentle side to Will and showed Griffith could do more than be the country rube.

Griffith by now knew the part backwards and forwards, and he kept to the sweet man Will Stockdale was, though by now he was looking a bit old to be this naive country boy (he was 32 at the time).  Perhaps because No Time for Sergeants was made after his fiery dramatic turn in A Face in the Crowd, Griffith here didn't seem as naive and sweet as he did when he did the television production, but now I'm getting ahead of myself.

Griffith was good, but somehow he came across in this version of No Time for Sergeants as less naive and more a total idiot.

It's interesting that McCormick too was recreating his Broadway role as the much flustered King, and here, he didn't seem like the much-bamboozled and put-upon sergeant.  Instead, he seemed almost slightly detached, more resigned to anything Stockdale or Whitledge did than horrified or frustrated by how it affected him.  It almost seemed as if he were expecting them to do something idiotic versus being genuinely shocked and appalled that his efforts to get them out ended up blowing up in his face.

It seemed that whenever Stockdale inadvertently humiliated or got King into trouble, it felt forced too.

A real astonishment is seeing Nick Adams, known for more tough-guy roles, as the meek Whitledge. It does show a range to his abilities as an actor, even though he came across as hopelessly whiny to where he is nearly unsympathetic.  One almost wishes he had been blown up by a nuclear bomb whenever he cries and moans about how he'll be court martialled or executed.

No Time for Sergeants felt extremely long, and I think it might have done good to have cut down on certain things, such as the time spent prior to getting to the base.  This is the first time I've questioned the idea of letting the Broadway cast recreate their roles for the film version (in the case of Andy Griffith doubly so, for while he was good in the film he again, looked a bit old for the role).

Not as funny as I'd hoped, No Time for Sergeants is still a work that might benefit from another version.