No Time For Sergeants: The Television Adaptation 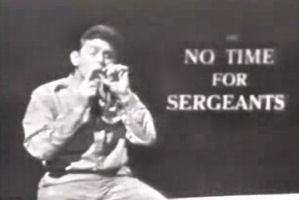 The story of No Time for Sergeants is a most fascinating one.  It began as a novel, then adapted as a one-hour live television play for the United States Steel Hour anthology program, then shifted to a Broadway play, and after that it shifted to a feature film based on that play, and ends up as a weekly television series.  In that long route, our first of two stops will be the United States Steel Hour adaptation of Mac Hyman's novel.

Will Stockdale (Andy Griffith), our narrator and protagonist, is a sweet, simple country boy who finds himself drafted.  He finds the military endlessly fascinating, taking on whatever is given him with a cheerful disposition.

He carries on, oblivious to how what he says or does drives his commanding officer, Sergeant King (Harry Clark) to distraction and horror.  King, convinced Stockdale is an idiot who can easily be pushed out of things, gives him the position of Permanent Latrine Duty, which Stockdale takes as a high compliment.  He's always willing to help, which makes sense since to Stockdale.  As he tells his commanding officer in the Air Force, "Air Force ain't nothing but helpers," having earlier been told by his only real friend, the slightly less dim but still bit crabby Ben (Eddie LeRoy) that the infantry is where the real fighters are.

King continuously tries to thwart Stockdale, especially since he thinks our simple country bumpkin will put his unit to ridicule.  However, every time King comes up with a scheme to make life hard if not impossible for Stockdale, our county boy always manages, inadvertently, to come out on top.  When, for example, he has Stockdale clean the latrine and paint the barracks, including the bunk beds, to keep Stockdale from being certified, it blows up in his face when the Captain (Alexander Clark), inspects the barracks.

Not only has Stockdale scrubbed the faucets so well he's rubbed off the "H" and "C" off, he proudly tells the Captain that Sergeant King had him do it. 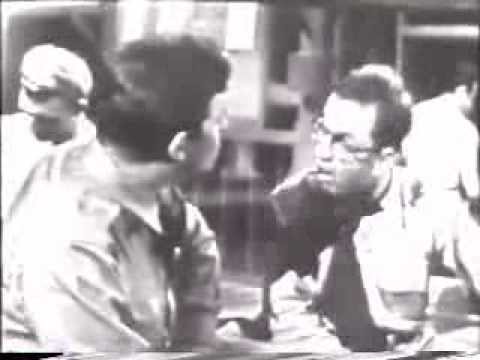 King comes up with other schemes to berid himself of this meddlesome private.  He sends him to a psychiatrist, who is promptly driven crazy by Stockdale's oddball but logical answers: when asked about girls, Stockdale begins telling the psychiatrist a randy story told to him, then advises the psychiatrist to try going out with one and he wouldn't be so scared of them.

An idea to have Stockdale pass the eye exam and thus have him move on almost blows up in King's face when he asks Stockdale if he could see the female Captain.  Having been lectured by Ben earlier to not 'see' them as 'women' but by their rank, Stockdale roundly states he sees no women.  King is beyond despondent.

The final scheme involves getting Stockdale hopelessly drunk so that he won't make the eye exam and can be booted out.  However, like Rasputin, King along with two others are astonished to see Stockdale easily drink copious amounts of alcohol with no effect.  Making things more bizarre, he says that back home, the only time he came close to liquor was when he tried a relative's own concoction that included kerosene.  Asking for lighter fluid, he dabs some on his drink and says it 'tastes a bit familiar'.

End result: a bar fight and King and the two other troopers ending up drunk.  The three of them get so drunk they arrive late to an inspection, one where Stockdale, in his eagerness to please the Colonel, rigs a step to shower him with confetti while a phonograph plays Wild Blue Yonder and an Air Force Flag drops behind them!  The Colonel is shocked and scandalized by all this, but it isn't Stockdale who is held responsible, it's poor, flustered, frustrated King.

In the end, King tells Ben and Stockdale that he's been demoted to Private for this latest fiasco, but Will Stockdale gives him words of comfort.

They will all soon be together in the infantry.

In perhaps other people's hands, Will Stockdale would have come across as either a complete moron or a bumbling buffoon.  However, Griffith makes Stockdale more a simpleton than an outright idiot, more naive and well-meaning than completely moronic.

Stockdale's total innocence is best summoned up by his willingness to tolerate the bullying behavior of Irving (Arthur Storch), one of the troopers who eventually was part of the scheme to get him hopelessly drunk.  He tolerates Irving because he believes him to have been ill.

"He had ROTC," he tells Ben, and he had it for a whole year.  That ROTC, Will reasons, is why they let him be in charge: out of sympathy.

Stockdale's guileless nature drives everyone crazy without meaning to, but it's Griffith's performance that makes Will endearing rather than insufferable. sweet without being an idiot.  What is extraordinary is that Griffith had little to no actual acting experience before No Time for Sergeants.  Prior to this, Griffith had been perfecting his corn-pone comedy routines for years in nightclubs, his most famous bit being What it Was, Was Football, a monologue where a country church deacon attempted to make sense out of a football game he'd seen and clearly didn't understand.

Griffith seemed to be expanding on his country comedy styling in No Time for Sergeants, but Griffith, helped by director Alex Segal, kept Stockdale from being a caricature.

Harry Clark was about the closest to a big-name in the teleplay, and he was strong, though not brilliant, as the perpetually perturbed sergeant.  It seemed a bit too exaggerated, but nothing horrible.  LeRoy's Ben played brilliantly with Griffith, forming a bit of a double-act.

In technical terms, No Time for Sergeants showed just how well live television worked.  The transitions between scenes flowed easily, most often by having Griffith address the camera directly as Stockdale while sets were changed and characters placed into position.  It was an extraordinary technical fit to have it all flow so smoothly, especially given that No Time for Sergeants had a rare live audience to perform to, as most teleplays did not do so at the time. 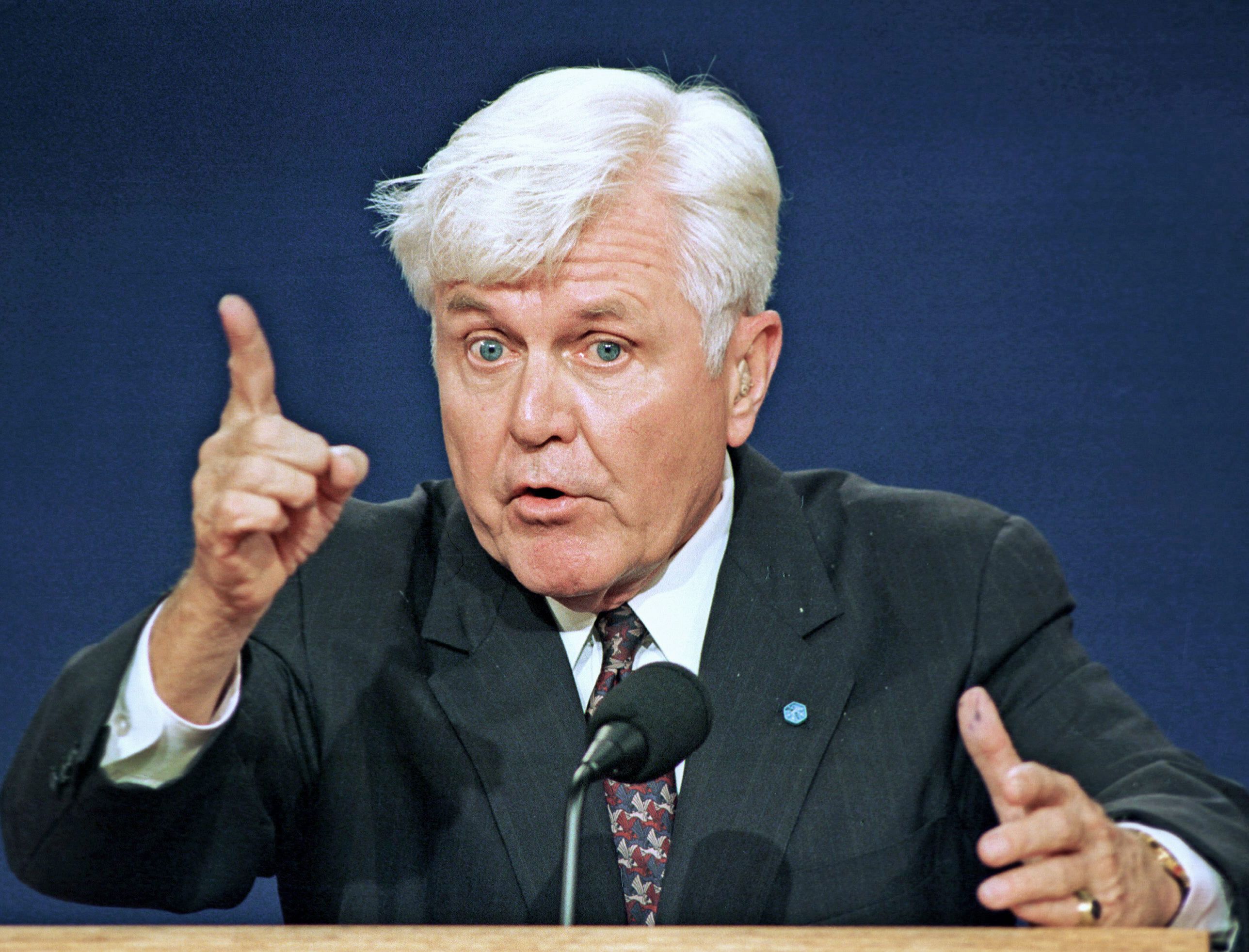 In a curious turn of events, it's almost unfortunate that the country bumpkin character Will Stockdale shared a surname with a genuine American hero who was portrayed as more stupid than the main character in No Time for Sergeants.  Admiral James Stockdale ran for Vice President on the Reform Party ticket in 1992 with Ross Perot, the only time in my lifetime when a third party candidate came close to challenging the two-party system.

Admiral Stockdale opened his statements at the only Vice Presidential debate with a witty comment about his sudden notoriety.  "Who am I? Why am I here?", he quipped.  This was the only bright spot for him, as he had a poor performance.  At one point, if memory serves correct, he had to have a question repeated because he had his hearing aid off. 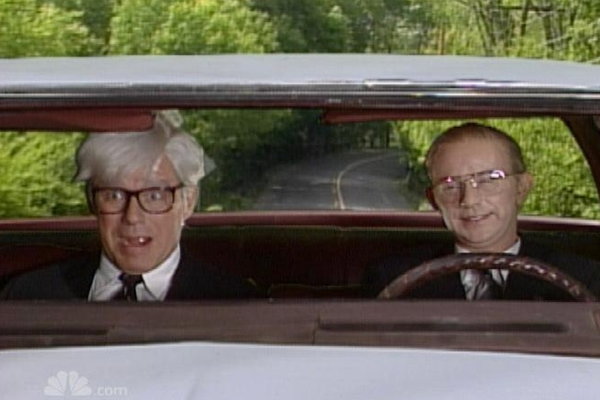 Stockdale, unlike his No Time for Sergeants counterpart, was turned into a laughingstock, mercilessly mocked on Saturday Night Live.  As portrayed by the late Phil Hartman, Stockdale was made to look like a thoroughly senile old man.  Hartman turned his quip into not an acknowledgment of Stockdale's near-total obscurity, but as the statements of someone who literally didn't know who he was or why he was here.

Hartman's Stockdale would bark out "WHO AM I? WHY AM I HERE?" and look perpetually befuddled, almost as if he were slipping into dementia right before our eyes.  With a look of puzzlement accompanied by a dimwitted grin, Hartman was almost vicious in his Stockdale impersonation.

Admiral James Stockdale was not a mentally unbalanced person, but it's a curious thing that this Stockdale was made more idiotic than his real-life counterpart, while the character Will Stockdale in No Time for Sergeants appeared to be dim, but instead had his own logic that he followed.

No Time for Sergeants was funny.  You can't help laugh at the observations of a man unaware of the world but not stupid.  You can't help laugh when, upon being told that there was a women's Air Force, he replies in shock, "Women got an Air Force against OURS!?"  With a brilliant turn by Andy Griffith, strong performances by the rest of the cast, and Segal's smooth directing, it's a wonder more country boys don't join the Air Force, to be helpers.