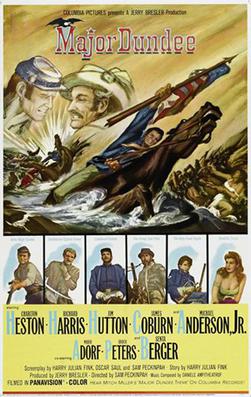 The backstage story of Major Dundee is an interesting one. Director Sam Peckinpah was drunk a good deal of the time, making him more irascible.  At one point, it's alleged that star Charlton Heston drew out his sabre and literally charged at the director.  Columbia Studios, fearing a disaster, cut the budget and ordered the Mexican shoot to close quickly.  Reedited with little to no participation by Peckinpah, Major Dundee was a critical disaster.

Nearly fifty years later, a restored version, putting back much of what was cut from the original, along with a new score by Christopher Caliendo, was released to much warmer reception.  Major Dundee is a good film, though not a great film, one that could have been more than what it is now but which still has a lot more positive than negative.

Narrated by Union bugler Tim Ryan (Michael Anderson, Jr.), we learn that we are still in the grips of the Civil War, out in the New Mexico Territory.  An Apache war lord, Sierra Charriba (Michael Pate) has been raiding and killing the settlers, culminating in a raid on a homestead where Union troops sent to stop him are slaughtered.  A punitive expeditionary force is sent out to capture or kill Sierra Charriba, led by Major Amos Dundee (Charlton Heston).

Dundee does not have enough men to go after Charriba, so he is forced to get Confederate prisoners to join in, none of whom are eager to join the Yankees.  The most unhappy about it is Captain Benjamin Tyreen (Richard Harris), an Irish immigrant who has risen to Confederate aristocracy.  He also happens to be Amos' former friend now bitter enemy.  Ultimately, being a Southern gentleman he gives Dundee his word that he will serve faithfully under Dundee, until the Apache is captured or killed.

Joining Dundee are African-American soldiers (then called Negroes), some mercenaries, and Samuel Potts (James Coburn), a one-armed scout.  There is also a bumbling artillery man, Lieutenant Graham (Jim Hutton), who isn't too eager to join on this journey.

In order to get to Sierra Charriba they have to cross into Mexico, currently in the grips of its own domestic crisis with the French having invaded and installed Maximillian and Carlotta of Austria as Emperor and Empress over the objection of its President, Benito Juarez.  The French occupation of Mexico is just one issue the driven Dundee faces, but the main one is how to integrate all these disparate troopers who loath each other.  The Union and Confederate soldiers barely get along and some of the Confederates have a hard time seeing the 'Negroes' as equals (one Rebel brazenly orders a black soldier to remove his boots). 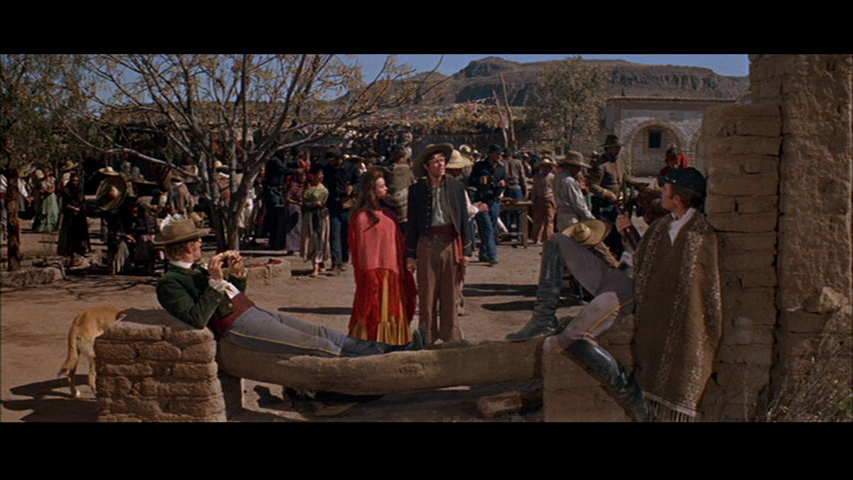 As the hunt continues, Dundee becomes more inflexible, to where he has no problem engaging the French troops to get needed supplies in a village already stripped of everything by the Apache, the French, and now the Americans.  Despite the dire circumstances, Dundee bends to help the villagers, one of whom is surprisingly, a beautiful German-speaking woman, Teresa Antonia (Sante Berger), the widow of the local doctor whom she met in Vienna.

Tyreen and Dundee vie for the widow's affection, but they still have a mission. Dundee becomes more and more obsessed with chasing Sierra Charriba, while everyone else pays the price for his obsession.  Just as the various troopers appear to be getting along, one of them attempts to desert, and Dundee's order to shoot him when captured splits them again.

Eventually, they do find and kill Sierra Charriba, but now they are being pursued by the French, angry at this Yankee incursion.  The Americans/Confederates now must race back to the Rio Grande into the United States before the French catch up to them, and not all will survive.  Those who do return to the United States, according to the narration, on April 19, 1865, unaware the Civil War has come to a close and President Lincoln is dead.

Major Dundee has several elements which appear borrowed from other films past and future.  When Tyreen shoots the deserter, we can see elements of Lawrence of Arabia when T.E. Lawrence must do a similar act to keep his Bedouin army together.  Getting a group of military prisoners to join in this daring raid brings to mind a pre-Dirty Dozen.  We can even see shadows of a later Peckinpah film: The Wild Bunch, when another group of soldiers of fortune goes into Mexico.

Probably the biggest inspiration for Major Dundee is Moby-Dick, with Dundee as the crazed, obsessed Captain Ahab, chasing his own white whale with his conglomerate.  If so, then we have a slight issue when it comes to Charlton Heston.

I'm a Heston fan and think he is one of our great actors, but while he gave a good, solid performance in Major Dundee, I never fully accepted that he was a somewhat obsessed, almost crazed military leader.  There were moments when Dundee's obsession, his conflict between a love for Antonia and his desire to defeat all his enemies did come through (the scene where he is caught with another woman while recovering from an arrow wound is especially good).  However, Heston appears too controlled, too strong a presence to be seen as obsessed to the point of blindness.

It's as if we can't see Heston as Dundee losing control of himself.  Yes, Heston commands the screen and yes, Heston conveys strength and arrogance and disinterest in how his troops see him, all to serve the mission.  Yes, we can even see a more romantic side to Chuck when he woos the widow, but despite this, Dundee's obsession with taking down Sierra Charriba doesn't quite come through because Heston seems too solid, too intelligent to give in to primal rage.

Heston, however, is above Harris' mannered Southern squire, who attempted to be charming but ended up looking slightly fey and exaggerated in his manner.  Much better were Hutton as the bumbling Graham, who I figure was the comic relief, but the best performance I thought was Coburn as the wily and realistic Sam.  He and Dundee had a closer relationship than that of scout and commander (often, Sam would refer to him as 'Amos', something even Dundee's former friend Ben rarely if ever did, and if so more out of anger than respect or camaraderie).  He was sensible, shrewd, and courageous, and stole almost every moment he was in.

Anderson, who narrates the film in voice-over, has amusing moments as the innocent bugler who finds a beautiful girl in the village to be loved.  Berger, in an equally smaller role, is the voice of love in a testosterone-filled film, one who is strong on her own but who still loves her very flawed man.  Mario Adorf brought dignity to his role of Sergeant Gomez, to where we can forgive his not being actually Mexican.  It's good to see a Hispanic

Major Dundee at times seems to lose its way, particularly with a very extended Mexican feast at the village that seems to drag down the film.  It also at times seems to forget that the quest is the central goal as it meanders back to getting at Sierra Charriba.  The actual battle seems almost anticlimactic and quick.

Still, there is more good than bad, and some wonderful moments.  Despite some night battles being hard to see, the final battle with the French is strong, particularly in the evolution of Tyreen, who risks his life for the colors, perhaps not realizing in the heat of battle that he was rescuing the flag of his sworn enemy.  The march out of the fort, with the defiant Confederates singing Dixie, the Union responding by simultaneously singing The Battle Hymn of the Republic, while the civilians singing Oh My Darling Clementine, was also beautiful (pity they didn't give the African-American soldiers a song, though I imagine they would be with the Battle Hymn).

As we didn't have a chance to hear the original score, we can't say how it compares to the original, but the restored film's score by Caliendo is strong and thrilling.

Major Dundee could have been a great film, and perhaps it could benefit with a remake.  With strong performances by most of the cast and an interesting story, it works to entertain.  It doesn't hit the level of epic it aspires to, but it is a film that should be better remembered.