King Arthur: Legend of the Sword. A Review

KING ARTHUR: LEGEND OF THE SWORD

I have long contended that when we see a colon as part of a film title, it is a declaration that this will be a franchise.  King Arthur: Legend of the Sword follows this pattern, and from what I understand it was meant as the first of a highly ambitious six-part franchise on the adventures of our mythical King.

The end result is such a bungled disaster that we can pretty much rule out one sequel, let alone five more. King Arthur: Legend of the Sword should go down in history as a textbook example of what happens when film studios and filmmakers put the cart in front of the horse, put greed and lack of foresight ahead of common sense and for all intents and purposes, insult the audience.

Back in un-merry old England, we learn that Mages and Humans have lived in peace, until the Mage Mordred attacks the last free stronghold: Camelot.  Here, brave King Uther (Eric Bana) defeats the monster who created gigantic elephants and saved his castle.  He would have been better served to watch his back, as his wicked brother Vortigern (Jude Law), whose name appears lifted from Voldemort, manages somehow to usurp the throne.

In the chaos of war, the young Prince is sent down the River Thames, where a gaggle of remarkably healthy-looking prostitutes find him, raise him, and name him Arthur (Charlie Humman).  He grows up in the back streets of Londinium, a bit of an Artful Dodger with a Cockney manner, forever managing to be a bit of a criminal with his mates.

Vortigern wants to rule all England, but the deal he's made with some octopus women (shall we call them Octopussies) rests on him getting rid of all of Uther's blood heirs.  Arthur is still out there, so he gets every man of the right age to perform a task only Uther's son can do: pull out Excalibur, the Sword from the Stone.  Lo and behold, a disbelieving Arthur manages to do that, but finds the Sword is extremely powerful and him not able to fully control it.

Being his nephew, Vortigern plans to behead Arthur, but he is saved at the last minute by the intervention of 'The Mage' (Astrid Berges-Frisbey), a sorceress and apparent protégé of Merlin.  Once rescued, Arthur finds himself part of 'The Resistance', joining others.  Arthur must learn to use Excalibur, but he is still haunted by the past both metaphorically and literally.

Therefore, it is off to The Dark Lands where the hero is to be cleansed.  After that, he rejoins 'The Resistance' and becomes their de facto leader.  A plot to assassinate Vortigern fails, and the wicked King continues a reign of terror.

Eventually though, Arthur and his blokes do get together, but not without losses.  Vortigern forces Arthur to surrender, especially since he has Excalibur (though it appears useless when he wields it).  Arthur is saved once again by The Mage, and with him finally triumphant, he is crowned King.

King Arthur: Legend of the Sword is an insult to the Arthurian legend, those who love it, and just about anyone who genuinely enjoys a good movie.  There is simply so much wrong with it, wrong on so many levels, it might genuinely take a whole other essay to detail how everything here destroys the lofty goals its makers had.

I think though, we can mention a few.  There's the wild changes to the Arthurian legend.  Mordred, whom I don't think we are introduced, wasn't some magical being: he had been up to now the bastard son of Arthur and his half-sister, Morgana Le Fey (though to be fair, if memory serves correct the enchantress disguised herself as Guinevere so as to sleep with her brother).  Vortigern appears to have been a wholly new creation, and Uther to my memory wasn't particularly noble.  Instead of Merlin having a major role in Arthur's life, he hands that duty off to The Mage (who as far as I know never got a real name, she was always just 'The Mage').

Let's not forget the entire story of 'Wart', but all that is in keeping with writer/director Guy Ritchie (who co-wrote the script with Lionel Wigram and Joby Harold, credited with the screen story).  Ritchie revels in the East End, working-class, not-quite-respectable figures, these brawlers and lowlife hoods.  His major works like Snatch and Lock, Stock and Two Smoking Barrels all revolve around the criminal underworld.  He even turned the very posh Sherlock Holmes into a more shady figure, more action-star than intellectual giant.

Is it no wonder then that when looking at King Arthur, the leader of the Knights of the Round Table, the embodiment of idealism and chivalry, he'd end up making him a bloke, complete with other mates who are petty criminals, live with hookers, and told the first part of some cycle in this way?

That is another problem with Legend of the Sword: it thinks it is highly clever by making Arthur 'one of the blokes' and instead fails to give him a real personality.  I have nothing against Charlie Humman, but I am perplexed as to why Hollywood continues to force him into being a big star.  Apart from his role on the television series Sons of Anarchy (where he essentially played the East End Arthur from Legend of the Sword except with an American accent), Hunnam is best known for the role he didn't play, infamously dropping out of Fifty Shades of Grey before production began due to, according to him, an extremely tight shooting schedule on other projects.

As a side note, he could have studied with the ghosts of Laurence Olivier, John Gielgud and Ralph Richardson and it still wouldn't have made Fifty Shades of Grey any better with him in it.

Hunnam is very handsome and muscular, but he hasn't broken through despite the mad push to get him there, particularly in action films.  Neither Pacific Rim or Crimson Peak or another recent flop, The Lost City of Z, have made him a bankable star.  Why a studio opted to build a whole franchise around such an untested actor with virtually no name recognition is a mystery.

Even if Hunnam could demonstrate that he was a deep, well-versed actor (which he hasn't), Legend of the Sword gave him little to nothing to work on.  We never really learned what made Arthur tick.  We never care about him as a person, let alone why we would rally around him to be our great hero.  Hunnam tried to show he could handle rapid-fire dialogue, but he was not compelling at all.

That is true for everyone in Legend of the Sword.  It got to a point where one doesn't even bother learning the characters names because we don't care a whit about them.  It's sad to see Bana wasted yet again.  I think Bana is a pretty good actor, and maybe if we had focused a film about him and his struggle against Vortigern we might have had something, but the film was too impatient to rush off to another action sequence to care.

Of particular embarrassment was The Mage.  Who was she?  Why was she?  Why didn't Merlin come?  Questions that won't be answered, and her performance so dull it isn't worth revisiting to try and find them.

The best thing said about Jude Law in Legend of the Sword is that he probably had a laugh knowing he didn't have to act.  At least David Beckham in a cameo didn't have to think about anything other than having a good time, though while watching the film you are asking yourself, 'Is that David Beckham?' 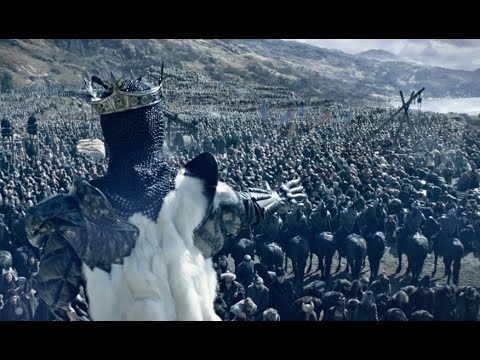 A third issue is in the actual script, which thinks it is quick-witted when it ends up just being confused and boring.  Over and over Ritchie does what I imagine they tell you not to do in film school: he shows and tells simultaneously.  That is already bad enough, but he does this at the worst time.

These three mish-mashed scenes are going on at the same time, and soon it becomes impossible to know where you are in all this.  This followed an earlier scene where Arthur and his multicultural mates were being interrogated by a police, where the lot of them were having a hard time figuring out whom they were talking about ('Which George: back-alley George? Kosher George? Mud George?', while not an exact repetition of the dialogue, gives an idea of how they all talked).  As we were watching and hearing at the same time, jumping about, one wonders why Ritchie just didn't go for a more straightforward storytelling method: one where we either had brief clips of the happenings or actually saw the happenings rather than hopping about.

It is amazing that for a long, big action film, one can easily fall asleep at King Arthur: Legend of the Sword (I counted two or three times where I either dozed off or fought not to, with my friend admitting that he too had fallen asleep).

The film has no sense of excitement, of majesty.  We feel nothing when Arthur pulls the Sword from the Stone (which we discover was created out of Uther Pendragon when he literally turned to stone after being killed defending Camelot. Don't ask).  If it was trying to be clever by throwing in lines about "The Resistance" (that nom de guerre that anti-President Trump people have given themselves), it almost made one want to Make Camelot Great Again.

King Arthur: Legend of the Sword should have concentrated in trying to be one good film, not the opening chapter of a franchise.  The idea of a King Arthur series is dead, flat-out dead.  Boring, chaotic, with bad performances and a story that is rushed, nonsensical, and decimates the centuries-old Arthurian legends, King Arthur: Legend of the Sword is so bad that not even the Queens of Avalon can save it.

I include some Personal Reflections on King Arthur: Legend of the Sword.
Posted by Rick at 9:17 PM