Stunning is the best way to describe The Lying Detective, the second episode of Sherlock Series 4.

Stunning in how awful it all is, and more stunning in how much praise this piece of rubbish gets.  I genuinely struggle to understand how Sherlock, a show that is generally nonsensical despite its posh pedigree, can be considered brilliant.  I would qualify something to be brilliant if it makes sense, if it holds my interest, and if it doesn't have me rolling my eyes.

It seems that Sherlock Holmes (Benedict Cumberbatch) has gone insane, or at least gotten way back into narcotics.  Rambling, confused, incoherent (a lot like the show itself, but I digress), part of his issue may be his struggle with the idea of guilt over the death of Mary Watson (Amanda Abbington).  Mary's husband, John (Martin Freeman) is also struggling: with her death, his own guilt, and his anger at Sherlock over it all.  He sees a therapist to help him with his issues, but there's no time for such introspection, for there's a case to be solved.

Sherlock, with his mad powers of deduction, had deduced two weeks before John did anything where he would be, down to the exact time.  This is why Mrs. Hudson (Una Stubbs) was able to race her Astor Martin car to the therapist where John was in a middle of a session.  She manages to get Sherlock there too, in what appears to be a completely disheveled state.

Sherlock has made wild accusations against Culverton Smith (Toby Jones), a billionaire philanthropist, accusing him of being a serial killer.  He even has overcome his disdain for Twitter to do so.

As a digression, what kind of person is Sherlock Holmes, a man who would willingly give up his virginity to literally pump someone for information? I call him pathetic, but again I digress. 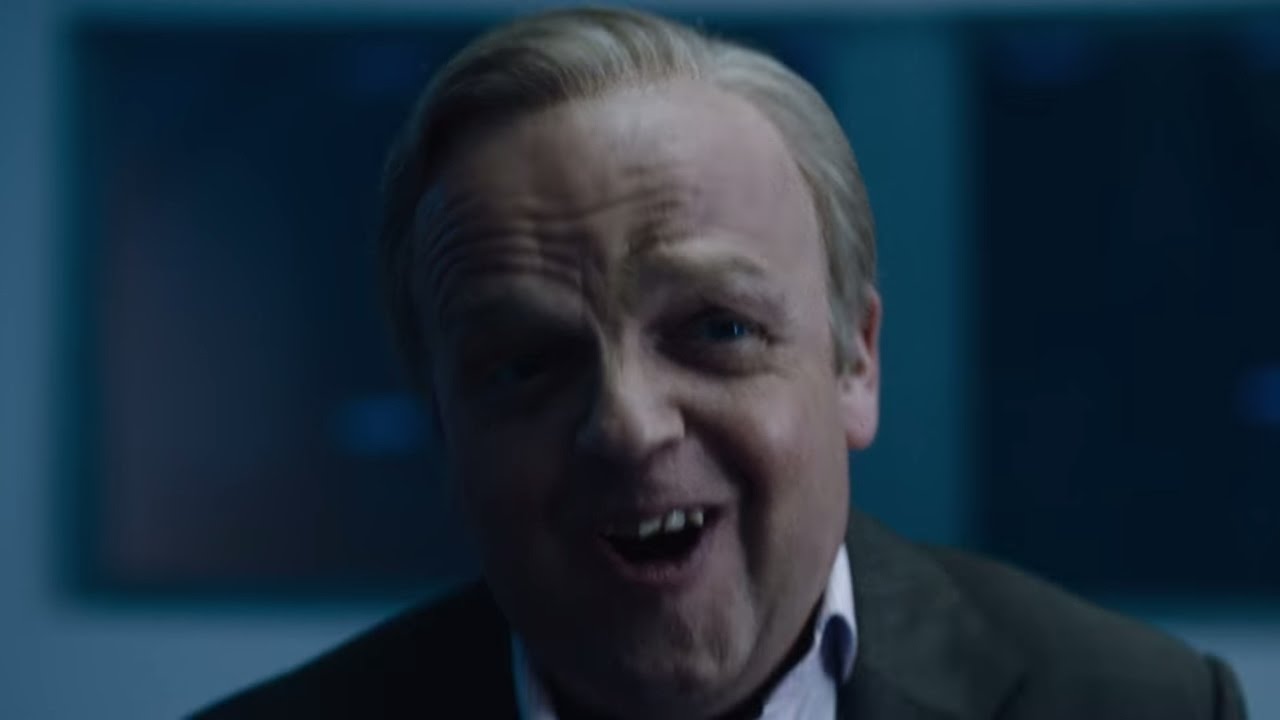 Earlier, Sherlock had received information about Smith's murderous desires from Smith's daughter, Faith (Gina Granville), who had fallen on hard times.  She tells him an extraordinary story about how her father essentially drugged everyone with something that inhibits the memory so he could confess without them really remembering much.  With this scant bit of information, Holmes is able to find that Smith, far from being a benevolent soul with awful teeth, is really a psychopath and a truly evil man.

Still, who is going to listen to him in his state?  Smith is also a touch clairvoyant, as he sends his car to pick up Holmes and Watson.  Watson goes somewhat alone, still seeing Mary whom he converses with (something that I saw used to greater effect on Due South, but again, digression).  Holmes goes via ambulance where his one-sided love Molly Hooper (Louise Breely) examines him and finds him in dreadful shape.

It looks like Smith is having a bit of fun with Holmes, taking him first to a studio where he films a commercial talking about how he's a 'cereal killer', then to a hospital where Smith contributed a wing. In Smith's 'favorite room', the mortuary, Holmes confronts Smith but again there's no evidence of anything, and Holmes becomes unhinged.  It's up to Watson to knock him out of it, taking the chance for a bit of revenge for Mary.

While Holmes is in that hospital, Mycroft (Mark Gatiss), who has been tracking his brother, dares to go to 221 B Baker Street and face off against Mrs. Hudson.  As she, Mycroft, and John all argue, they find Mary's video recording.  John races to the hospital, where Culverton Smith does confess to a beleaguered Holmes that he does enjoy the thrill of the kill.  Not only that, Smith wants Holmes to be the next victim, and Holmes wants to be victimized.

In the end, John Watson saves Sherlock Holmes, but who is going to save John Watson?  Back at his therapist, John makes a shocking discovery: the same therapist was really the false Faith who fed Holmes the story.  Not stopping while the going was good, the same therapist/false Faith also confesses to being the girl on the bus whom Watson flirted with, AND she also happens to be the lost Holmes sibling: Eurus, which means 'the East Wind'.  All this time Watson might have thought it was a Holmes brother, but it was really a Holmes sister.

I can tolerate a great deal, but sometimes, Steven Moffat really tries my patience, though mercifully he doesn't try the patience of many a Sherlock fan who never bother to question anything, so long as he makes them cry.

I remember when in His Final Vow, Mycroft talked about 'the East Wind is coming'.  Now I'm supposed to accept that Mycroft was signaling that their up-to-now unknown sister Eurus was headed their way.  Apart from the deliberately and nonsensical vagueness of this, I'm supposed to also accept this as some sort of brilliant storytelling.

Again, we have the Sherlock trope of 'Sherlock is smart only when necessary'.  Here we have another example of how Sherlock Holmes, who can deduce that the Faith who came to him lived in a small house and had lost her lover and had been harming herself for months could also not deduce that the woman was a fake. We also have a bit of a repeat of the past, where Sherlock Holmes again accuses someone of being a criminal and that person appears to be incapable of being one.  In The Reichenbach Fall, Holmes accused Richard Brook, mild-mannered children's television host of The Storyteller, of being a criminal mastermind.  Turned out he was really Jim Moriarty, but I found the reasoning behind that so convoluted, tortured and idiotic I still find it amazing Moffat, co-creator Gatiss, or anyone else involved could get awarded for such inanity.

If nothing else, Moffat is a master of repeating himself.

We face in The Lying Detective not so much a case as a variation of The Reichbach Fall, and we also face some really far-fetched plans.  I'm going to cut Moffat some slack with the idea that Smith drugged people before confessing his crimes because that all might have been a rouse to get the ball rolling, but it does seem slightly unfair to present this to the audience when a less, flamboyant manner to disseminate this information might have been used.

Truth be told, I was hoping Culverton Smith would be innocent, and if he had been we might have had a deeper exploration of the themes Moffat was going for: guilt, regret, anger, loss, pain and all that comes with all that.  Seeing Holmes broken down while still keeping his powers, seeing him slowly enter the world of humans, might have been a fascinating journey.

Instead, we got what we always see: Sherlock Holmes' almost divine abilities.  Now he is able to predict the future with total accuracy.  Via the Ghost of Mary, we are given what is a pretty logical way of how Holmes narrowed down the therapists (although despite his almost God-like ability to know all, he couldn't figure out that the therapist was Faith was the flirty text girl was his long-lost sister).  We also take time early on to see how Holmes made all his deductions to the false Faith, though again one wonders how he is clever enough to know she was about to kill herself but not clever enough to know it was all a performance.

Sherlock Holmes is smart only when necessary.  When he's required to be totally clueless, he will be so, logic be damned,

What is most frustrating about The Lying Detective is how Freeman's Watson continues to be the eternally flummoxed, eternally dimwitted, eternally puppy dog-like figure to Holmes.  Despite all the psychological torture he's endured at the hands of his 'best friend', he still races to save him.  Freeman has made John Watson such a bumbling, wimpy idiot he actually makes Nigel Bruce's take on the character seem Descartes-like in comparison.

I also at one point wrote in my notes, "F--- off, Mrs. Hudson!", and that is due to this mix of 'she's sweet but also tough' manner.  I think Stubbs is horrendous as the coddling Mrs. Hudson who manages to get an Aston Martin while still looking over her little lambs.  The transgender Ms. Hudson on Elementary has more sense than Stubbs' version.

Guest star Jones played his part correctly: being obviously evil, hideous teeth and all.  While watching The Lying Detective I did hope against hope those weren't Jones' real teeth, and I figure there was a reason they kept focusing on them.  I understand Jones' character was meant to be some sort of Jimmy Savile-like character: outwardly fun and avuncular but in reality a monster of unparalleled hideousness.  Savile at least was able to fool people into thinking he was benevolent, but with his behavior, teeth, and obvious insincerity there was no way Smith could pull of that trick.

He was just too obviously creepy.

As Watson observed, "Everything is about Sherlock", and as such, Cumberbatch got to have his 'character in health crisis' story.  He was fine in it; I can't find great fault, very perfunctory.  I did wish Watson or Smith had pulled the plug on him though, and is it a good thing when you are cheering for the murderer?

Moffat even included a few personal in-jokes in The Lying Detective, such as having a 'big fan' of Sherlock, a nurse, to comment that "Sherlock's blog" had gone down recently, a take on how often Moffat's Doctor Who scripts were criticized, I imagine (except for The Nerdist's Kyle Anderson, who almost always sings his praises).

As we head towards the finale, I still marvel at how so many insist Sherlock is this piece of pure genius.  I find it all nonsensical, ridiculous, and illogical: three things I would never say about Canon.

If The Lying Detective is the best Sherlock can do, I shudder to think when we get an episode even Kyle Anderson can't shill for...

Next Episode: The Final Problem