THE SONG OF SONGS

It's hard to argue against a film that has Marlene Dietrich in the main role, but I wonder if The Song of Songs was really suited for her.  Her first film with a director other than her Svengali, Joseph von Sternberg, The Song of Songs still gives us her glorious face, but something is still a bit off, the idea of who Dietrich is supposed to be a bit lost.  It's interesting to see how she perhaps was crafted by von Sternberg into the Goddess she was seen as, and The Song of Songs, while at times quite lush and beautiful (like Dietrich) was not all it could be.

Innocent country girl Lily (Dietrich) is forced to move to Berlin after her father's death.  This thoroughly naïve, virginal girl is taken in by her aunt, Mrs. Rasmussen (Alison Skipworth), who owns a bookshop.  Auntie isn't happy that Lily is so uncultured and worries that despite her country bumpkin manners, her body and face will draw wickedness.

Lily soon catches the eye of Richard (Brian Aherne), a sculptor who lives across the street.  She is flattered that he wishes to sculpt her, but shocked he wants her to pose nude.  Mustering what courage she has, she disrobes for him as he creates the sculpture, which he calls The Song of Songs, after the book of the Bible that is her favorite and which she read to her dying father.

Soon, despite Auntie's whippings, Lily continues to pose for Richard and despite themselves, they fall in love (and presumably, in bed).  There is however, an obstacle: the Baron von Merzbach (Lionel Atwill), who commissioned The Song of Songs.  He is drawn to Lily, both for her beauty and innocence.  The Baron pushes Richard to abandon Lily and let him make her his Baroness.  Reluctantly, seeing that he has nothing to offer her, Richard agrees.

The Baron, no fool, has already gotten Mrs. Rasmussen's agreement to essentially sell off Lily to him.  Lily, devastated by Richard's sudden abandonment, marries the Baron.  The now-Baroness has to contend with a man she does not love, a Mrs. Danvers-type housekeeper (Helen Freeman), who it is strongly suggested had been the Baron's mistress prior to Lily, and the agriculturalist/gardener Edward (Hardie Albright), who has fallen immediately in love with the Baroness.

The Baroness is taught to be a sophisticated lady, but she still loves Richard despite the lessons in French, singing, dancing, and piano.  The Baron, eager to see how well his Eliza Dolittle has turned out, invites Richard to dinner to see how he has molded his own creation.  This reunion is an unhappy one, and in desperation the Baroness throws herself at Edward.  An accidental fire at his hut, however, alerts everyone to her indiscretion, and now shamed, leaves to sink into a life on the streets as a bitter but elegant courtesan.

Richard spots Lily at a club, and drags her to his apartment, where The Song of Songs still resides.  Angry at what she has become, Lily smashes the statue, declaring what right has she to live.  Despite the utter destruction of The Song of Songs, Richard and Lily may yet still make a life together.

It would be akin to have us believe that The Golden Girl's Rose Nylund was now suddenly Blanche Devareux.

That certainly is something The Song of Songs has going for it: a sometimes lush and romantic look that captures your attention.  Whether it is the clutter of the bookstore, the lovers' frolic in the meadows, or the final memory of when she, this fresh and innocent creature, had come to Richard's studio versus how she was now, the film does have an extraordinary look.

It doesn't have a particularly good performance from Aherne, who was exaggerated as the lovelorn Richard.  He was trying too hard to be so disinterested at first, then too interested later.  There is also in how he handles the sculpture, which at times borders on the frisky if not freaky.  I figure that was deliberate: to make the figure his own Pygmalion, but it did look a bit odd.  Almost makes one wonder what he does with The Song of Songs after dark. 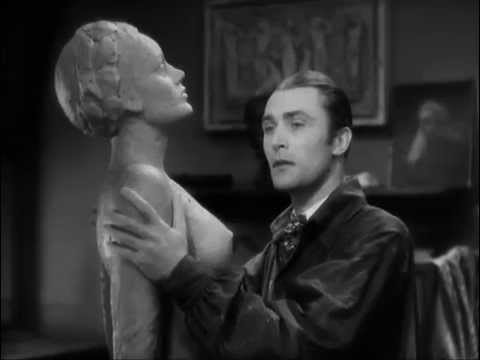 One aspect of The Song of Songs that is puzzling in with regards to the Baron.  The script wants to have it both ways when it comes to him.  On one hand, he appears to genuinely love her, eager to make her into a refined lady and giving her a life of prestige and privilege as a Baroness.  On the other, he comes across as almost a dirty old man, lusting after this young, nubile creature, and having no regard for her in any way except to pass her off as a refined lady.

The film never entirely decided whether The Baron was in love with Lily or just lecherous towards Lily, asking us sometimes to be sympathetic to him, sometimes to rebel against him.

Same goes for her relationship with Edward.  She attempts to show how jaded she is when he declares his love, but then throws herself in desperation towards him, and more hilariously, thrusting her arms to where she literally sets the fire.

I've heard of Love in Flames, but this is a bit much.

The Song of Songs does have some really wonderful moments, particularly montages where we see the education of Lily, and the film is entertaining enough.  It just could have been more.

It's curious to see the great Dietrich, a woman who defined strength and allure, passing herself off as an innocent, down to a very soft voice.  I think her image as the sultry world-weary woman was too set to allow a radical shift like with The Song of Songs.

My understanding is that The Song of Songs was the film, or at least the first, which heralded Marlene Dietrich's slide into 'box office poison'.  I might be wrong, but looking at the film, it might be a stretch in some respects, and by no means her finest hour.  Still, The Song of Songs has a melodramatic quality that is entertaining if a bit overdone.  With some beautiful imagery, and the beauty of Dietrich, The Song of Songs is lush though far from perfect.