THE SPACE BETWEEN US

I tried reading Robert Heinlein's Stranger in a Strange Land but found it a bit dull, so I never finished it.  The ghost of Valentine Smith, however, haunts The Space Between Us, a film about the first boy born on Mars and his return to Earth.  I figure The Space Between Us would make no claim to being on the same level as Heinlein's work, seeing it is an angle on the teen romance novel currently in vogue.  Whatever good ideas there might be in The Space Between Us get lost in the effort to please a teen market by saddling it with clichés and a plot twist both predictable and idiotic.

Sarah Elliot (Janet Montgomery) leads a group of astronauts to Mars, the first group to permanently live there.  A joint effort of NASA and Genesis Enterprises, the CEO of Genesis, Nathaniel Shepherd (Gary Oldman) is thrilled to see his colony, called East Texas, come to life.  Something else will be coming to life too, as everyone save the press discovers that Sarah is pregnant, a result of her 'irresponsibility'.  Dr. Tom Chen (BD Wong) pushes to have her brought back and avoid scandal, but Nathaniel feels this could be the start of a whole new era of scientific research: the first boy born on Mars.  Sarah's baby is born shortly after arriving, but she dies in childbirth.

Nathaniel, devastated by this, withdraws from society, and her child, named Gardner (Asa Butterfield) has essentially been raised by Kendra (Carla Gugino), another astronaut.  Gardner is a genius of sorts: able to create an almost-sentient robot and break into East Texas' security system.  He does this to find more information about his mother, and among her effects is a video of her with a handsome man on the beach.  Now, Gardner years to find his father.

He also would like to see a girl he's been communicating online back on Earth, someone he knows as Tulsa (Britt Robertson).  She's an angry girl, a foster child whose had a long line of awful parents generally disinterested in her.  Kendra pushes to have Gardner go to Earth, which despite misgivings, is done. 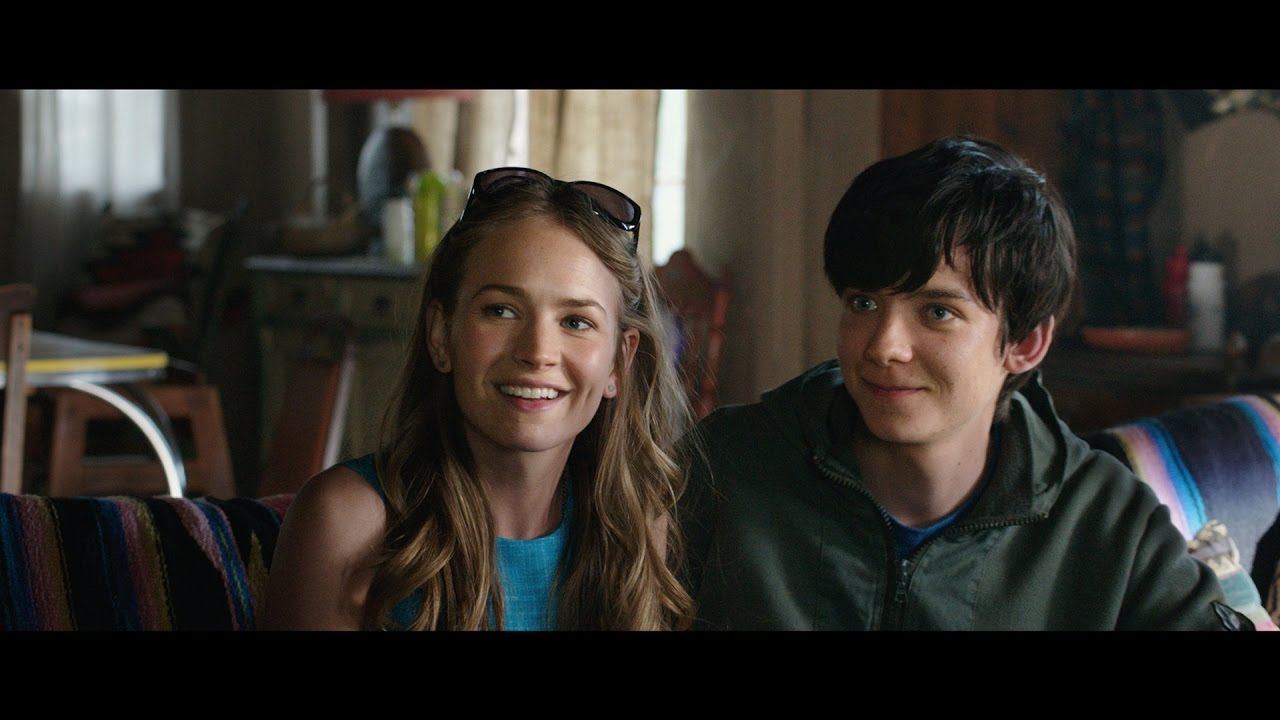 Gardner and a returned Nathaniel find that Earth's gravity is going to affect Gardner: his thin bone density and heart will struggle on Earth.  Nevertheless, Gardner is determined to meet Tulsa, so off he goes to Colorado.  He's being pursued by Nathaniel and Kendra, but he and Tulsa manage to stay one step ahead of them.

The street-smart Tulsa has no problem stealing to get her and Gardner where they need to go, first to a shaman in New Mexico who married his parents, then to Las Vegas so he could 'see the world', and finally to northern California, where a little detective work has shown them the house in Gardner's video.  In that time the innocent, straightforward Gardner breaks through Tulsa's various defenses and returns his love, complete with a romantic encounter in the New Mexico desert.

However, gravity is a source of gravity for Gardner, who becomes ill and is forced to hospital.  Tulsa breaks him free to get to California, and Nathaniel has deduced this is where they are headed.  Once there, Gardner confronts the man in the video (Colin Egglesfield), who makes a shocking revelation: Sarah wasn't his wife, she was his sister.

Gardner is dying, and while found in time by Nathaniel and Kendra he still has to be raced to the very edges of Earth's atmosphere if he is to live.  Eventually, Gardner is returned to Mars with his father joining him, Tulsa is taken in by the childless Kendra, and Tulsa trains to go to the Red Planet.

As I said, it's hard not to think that screenwriter Allan Loeb (who created the story with Stewart Schill and Richard Barton Lewis) weren't cribbing in some way the Heinlein masterpiece.  Both The Space Between Us and Stranger in a Strange Land have a boy born and raised in Mars, who have to be kept in quarantine when he arrives, have women involved in their escapes, encounter esoteric religions, appear total innocents and create love.  It also is surprising that The Space Between Us isn't based on a young adult novel because it has many hallmarks of one: boy and girl kept apart by something extraordinary, one innocent, one world weary, both of whom are running away from the adults who think know better but don't.

There would be some great ideas in The Space Between Us if the film bothered to explore them.   Instead, it decided to become essentially a road movie with a quest, one that leads to a conclusion that attempted to be a shocking twist but which proved hopelessly predictable, almost insultingly so.

Despite Egglesfield being exceptionally pretty and Butterfield with his exceptional eyes, you pretty much knew at a certain point that he was not going to turn out to be the father.  You also pretty much almost from the beginning knew who Gardner's father was, and the fact The Space Between Us went with the predictable instead of the sensible shows it wasn't trying hard.

You also had a very wild inconsistency when it came to Gardner.  No person has changed in being more quickly than Gardner Elliot did between Mars and Earth.  On Mars, he was this super-bright being: able to create robots, hack into systems, knowing how to be around adults.  Once he landed on Earth, he became almost an idiot: taking statements literally, being completely honest to the point of indiscreet, unaware of how people behaved, totally clueless when it came to human interaction.

The best way to see how The Space Between Us shifted Gardner's manner is when you compare his interaction with Kendra versus his first time in Tulsa's school.  On Mars, he had no problem being secretive, deceitful, and able to lie like any teenager.  In Tulsa's class, he was honest to a fault, unaware of things like sarcasm, and kind of bumbling.  The film wants to have things both ways: have Gardner be a genius who can hack into a sophisticated Martian system and build a robot but too dumb to do a Google search.

The shift from being the brightest boy on Mars to the dumbest boy on Earth is too unbelievable, and it makes Gardner less an innocent and more an unreal character, despite Butterfield's best efforts.

It also makes one wonder who was minding the store.  How was it that no one in East Texas knew Gardner was communicating with someone on Earth?  How was it that Gardner's existence was kept such a massive secret for sixteen years with no one ever spilling the beans?  You had hundreds of people in East Texas, and some who left in his lifetime (a plot point involves the film Wings of Desire, later remade in America as City of Angels with Nicolas Cage and Meg Ryan, which a 'German scientist' left when he came to Earth). Up to a point, The Space Between Us wants us to think of it as a spiritual heir to Wings of Desire (the 'angel' falling to Earth to experience all pleasures of the flesh and be with the one he's loved whom he's seen in 'Heaven'), but I think that's again, trying too hard.

I give credit to Butterfield for trying to work with this material, showing he's better than the script.  Gardner's longing for family, his desire to live and perhaps to die: Butterfield really wants to make a good performance out of what he has to read, and he does good in something as weak as this. Robertson, who despite playing a teenager is actually almost 30 (27 to Butterfield's mere 20) similarly had little to work with: almost always shouting and stomping to get the 'angry teen' bit down, but being given little time to show the softer side of the improbably-named Tulsa.

Oldman and Gugino too did well given what they had, though Oldman at times came close to overdoing it.

Finally, I have a comment about the whole pregnancy issue.  When they learn of Sarah's pregnancy, she is criticized by Chen and Nathaniel for her 'irresponsibility', and I object strongly to that.  It wasn't 'her' irresponsibility, but 'their' irresponsibility.  Both of them knew or should have known that unprotected sex prior to launch could lead to pregnancy, and the idea of putting this solely on Sarah is to my mind almost chauvinistic.  It wasn't 'her' fault she got pregnant.  Moreover, I don't see why news of this would have been so scandalous: she was technically married by a shaman so Gardner wouldn't have been illegitimate, though whether said marriage would be recognized is up for debate.

Nevertheless, the idea that 'she' and only 'she' was 'irresponsible' struck me as unfair on so many levels.

The Space Between Us could have been more, but what it is, is a mixture of other things we've seen before: the runaway story, the teen love story, the 'stranger in a strange land' story, none of which added up to something good.  Sad to see that good ideas were sunk by teen soap-opera tropes and twists we saw coming.