The Beales of Grey Gardens: A Review (Review #920) THE BEALES OF GREY GARDENS

It's not often that documentaries become cult films and inspire passion among a group of devotees, let alone inspire musicals and a television movie. Grey Gardens, however, is no ordinary documentary.  This cinema verité look inside the demimonde of Mrs. Edith Bouvier Beale and her daughter, also named Edith, aunt and first cousin of former First Lady Jacqueline Kennedy Onassis, with all its eccentricities and opulent poverty, shocked many when it was released.

It also delighted many, seeing in "Big" and "Little" Edie both fashion mavens and upper-class rebels, living their lives their way free from societal and class expectations. They were seen as wise, delightful women who were unashamed to be themselves.  Thirty years after Grey Gardens, the Maysles Brothers, who made the original, cull their archives for The Beales of Grey Gardens, the follow-up to their portrait of women in the twilight of faded glory.

Whether it is a tribute to them or another round of shameful and shameless exploitation of them is up to the viewer.

We get more of the eccentric lives of the Beales: Miss Beale, better known as "Little Edie" continues to sing and dance for the camera while Mrs. Beale, also known as "Big Edie" recites poetry and appears to flirt with the handyman, Joe Torre, who behaves as though a lot of this is perfectly normal.  Little Edie also gives us her take on politics, astrology and the Catholic Church, and we get a visit from Lois Wright, whom Little Edie first refers to as East Hampton's 'psalmist' until Lois corrects her, saying she's a 'palmist'.

The elder and younger Beale continue to squabble in their squalor.  At one point there's a small fire caused by an overheated run-down pipe setting the dry wood aflame, which causes Little to be in virtual panic and thankful that the Maysles Brothers are there.  In this small fire, we see a brief glimpse of a surprisingly agile Mrs. Beale, who manages to scurry rather quickly for a hunched-over 79-year-old who appears to barely ever leave the second floor of her decaying mansion.

We even see that Little Edie does actually leave Grey Gardens at least once when we see her briefly attend Mass.  We end our second visit to this netherworld with Big Edie singing a song and Little giving a fashion show of sorts, a montage of her various outfits to entertain us with. 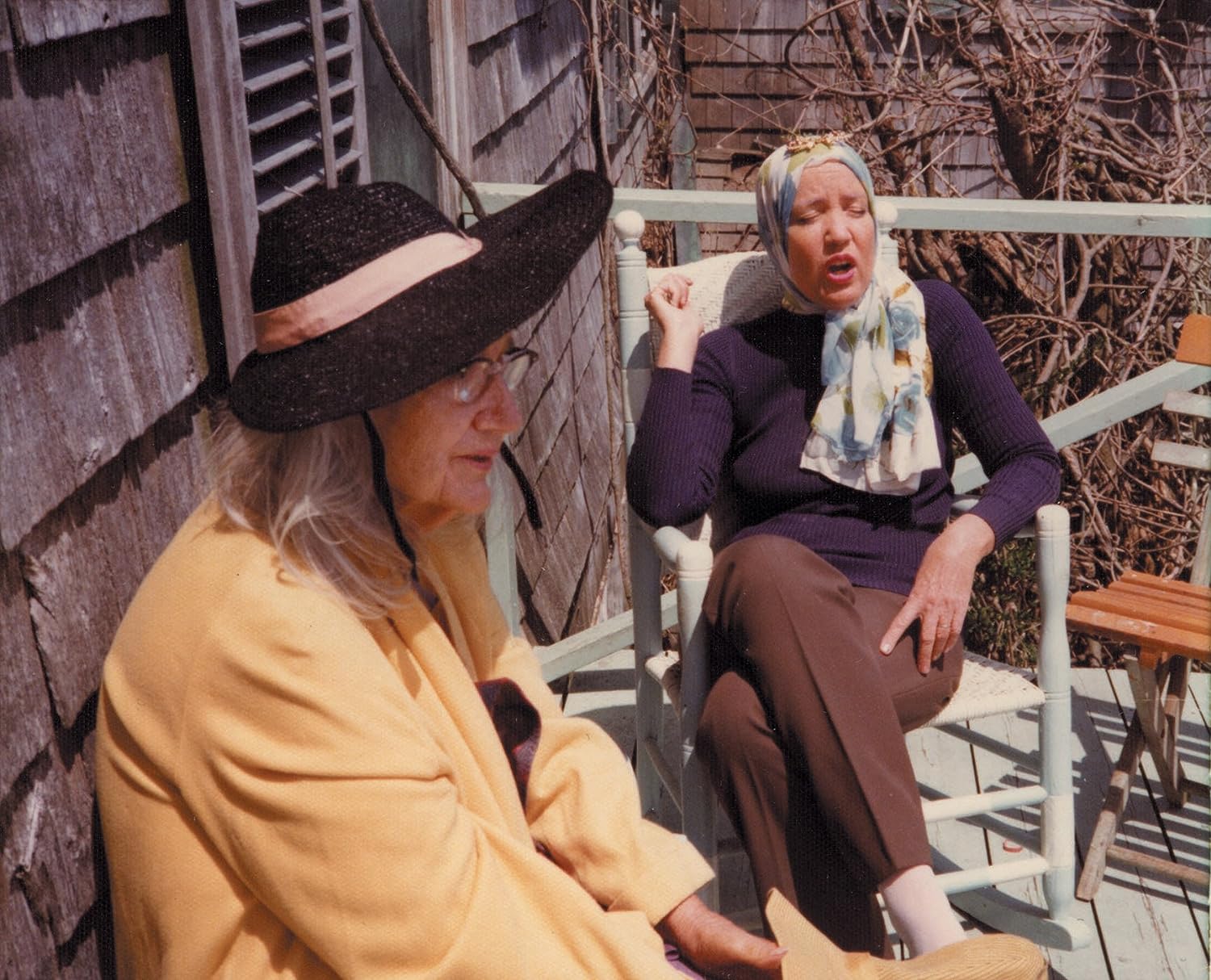 The Beales of Grey Gardens appears to make a firmer case for the insanity of at least Miss Beale, whom we see for the first time coming out singing You Ought to Be in Pictures and apparently flirting with the Maysles (David more than Albert).  It also makes the case that either she was shamelessly milking Grey Gardens to get her the fame she was so, in her mind, wrongfully denied, even if it meant appearing in a film that showed how dilapidated her home and wardrobe were (this is the first time I really noticed how ratty and worn down her fur coat was: the sleeve in desperate need of mending).

Besides flirting with the Maysles, she one occasion mugs for the camera, fully aware that her reactions are being caught on camera for all the world to see.  Maybe one of those people would be her famous cousin, whom she apparently wasn't fond of.  When Lois brought a magazine, Edie looks it over with her magnifying glass.  "Not another article on Jackie!", she fumes as she gives the cover the once-over before tossing it.

Mrs. Beale, for her part, has her own oddball behavior: forever hinting at romance with Jerry, occasionally joining in on her daughter's sing-alongs and encouraging them.  However, she actually appears to be slightly more rational, chastising Little Edie for trying to put out the fire with "Jacqueline's $300 blankets".  She also seems more aware of things, such as how her niece's husband "Mr. Onassis" paid for them to keep the house after it was raided by the health department.

I do say 'slightly', in that Mrs. Beale seemed more than comfortable lying in bed or out on her balcony, surrounded by cats, old newspapers, and general filth.

The Beales of Grey Gardens does give us more insight into these very bizarre women.  Little Edie, for example, explains that she wants her story told but not on film, saying that no one can or should play her (although after her death, there was a television movie with Drew Barrymore playing Little Edie, a curious turn given that one of the Maysles suggested Ethel Barrymore could play Mrs. Beale).  We also see some of the haughtiness and envy of Little Edie: she dismisses talk that she's schizophrenic by stating that "NO Beale is schizophrenic" and that only people with no convictions are.  Her general disdain at more stories on Jackie also show she had an envious streak. This film is more Little Edie-focused, giving her a chance to really strut her stuff.  The sight of her going out to Mass is probably the most shocking moment in The Beales of Grey Gardens only because it shows that they were capable of leaving their twilight-infested ramshackle of an estate and do things that most people could do.  In short, they were capable of functioning.

Perhaps that is the lesson of The Beales of Grey Gardens: that they were capable of functioning, of living within society but for their own reasons refused, choosing to be the younger and older versions of Miss Havisham from Great Expectations, locked away in their home in squalor but having no interest in repairing things physical or mental.

I think people who are fans of the Beales might find the extra singing, dancing, and fashion show from Little Edie highly entertaining, but what I saw was a life ruined by free will.  Two lives really, as both Mrs. and Miss Beale chose to be garbage-surrounded recluses, shut off from the world and apparently with no intervention from Mrs. Beale's sons or other relatives.  Then again, they could only do so much for people who wanted to live like this, and not be ashamed to let the world see them in these conditions.

Some of the footage is interesting, but I had a hard time staying awake through a second round of this garish freak show.  I found Grey Gardens to be a sorry spectacle, well-made but gaudy.  The Beales of Grey Gardens is a second go-round on this freak fest, slightly less shocking, less amusing, but in its way, perhaps more exploitive.

Whether exploitive from the Maysles or the Beales no one can ever truly know.