The Seven-Per-Cent Solution: A Review 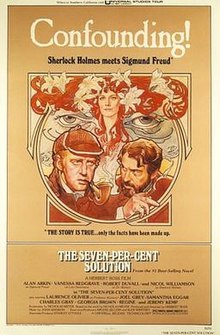 It's a curious thing that The Seven-Per-Cent Solution is titled thus versus a more common Seven Percent.  It's also curious that this Sherlock Holmes film is less about the mystery itself than it is about the main character.  The Seven-Per-Cent Solution is more of a character study of Sherlock Holmes, this cold analytical thinking machine, and who better to be our guide into Holmes' subconscious than the father of modern psychiatry, Dr. Sigmund Freud himself?

Dr. John Watson (Robert Duvall) has been hurriedly summoned to 221 B Baker Street. His friend and former flatmate Sherlock Holmes (Nicol Williamson) appears to be having intense issues with regards to his cocaine addiction.  Holmes keeps going on about Professor Moriarty (Sir Laurence Olivier), whom he accuses of being a criminal mastermind.

Moriarty pays an unexpected call on Dr. Watson.  He tells the doctor that he was the Holmes' former tutor and that Holmes' accusations are now playing havoc on his life, urging him to get Holmes help.  Watson is extremely distressed by all this, and decides on a radical solution: get Holmes treatment for his addiction.  In order to draw Holmes out of Baker Street, he creates with Holmes' brother Mycroft (Charles Grey) a ruse: getting him to follow the 'Napoleon of Crime' to the Continent, with the chase ending in Vienna.

Holmes, showing serious signs of addiction, falls into the trap, and is shocked to find he's been deceived.  Further, he isn't too pleased to find himself with Dr. Freud (Alan Arkin), but soon Freud begins hypnotizing Holmes and helping him through his withdrawal.  Holmes appears to be on the road to recovery when Freud receives an urgent call about a past patient he helped weed off her own cocaine addiction: famed actress Lola Devereaux (Vanessa Redgrave).

Freud is upset she appears to have relapsed, but Holmes deduces she was forced to take drugs again.  He further deduces she was kidnapped, and that she is still in danger.  Devereaux is part of a strange plot involving white slavery, an unwitting victim of the machinations of her lover, The Baron (Jeremy Kemp).  It's now up to Holmes, Watson, and Freud to save Devereaux, giving wild chase on trains.

As she has been saved, Freud makes one last request of Holmes: to hypnotize him one more time.  Under hypnosis, Freud and Watson learn a shocking truth from the Holmes Family past, one both agree should remain secret, so secret Freud induces Holmes to forget it altogether.  Holmes decides not to return to London but to take some rest, telling Watson to tell the readers anything he likes, even up to saying he was killed by the Professor.

Holmes, aboard a ship on the Danube, is surprised to find a fellow passenger: Lola Devereaux.  She hopes they can journey together, and thus begins The Great Hiatus. 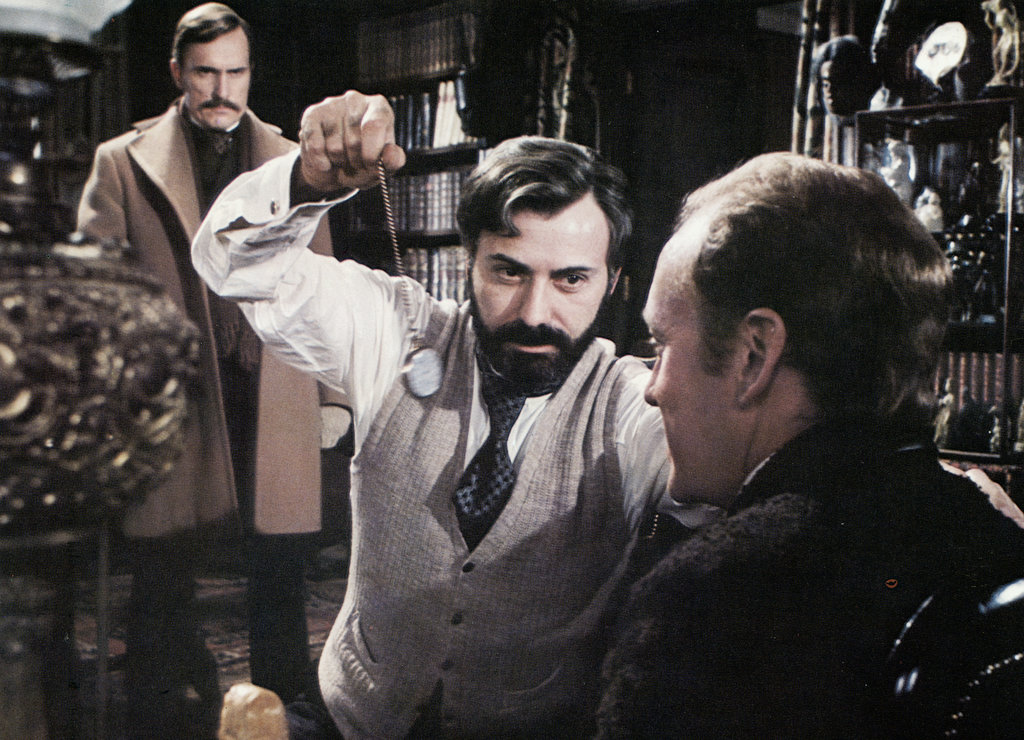 The Seven-Per-Cent Solution, adapted by Nicholas Meyer from his own novel, is an inventive and entertaining variation on The Canon.  The story is both serious and light.  We can tell it's meant as light entertainment with its opening: "In 1891 Sherlock Holmes was missing and presumed dead for three years.  This is the true story of that disappearance.  Only the facts have been made up".

Holmes' addiction, and in particular the almost psychedelic aspect of his withdrawal, is effective and well-filmed.  It's a serious subject addressed well, addressed seriously, and an important one too.  This isn't to say The Seven-Per-Cent Solution doesn't have moments of action or levity.  There's a brief scene with an Austrian cabby that is played for laughs.

On the whole, however, The Seven-Per-Cent Solution is less about the crime than it is about Sherlock Holmes.  The mystery itself isn't much of a mystery: the kidnapping of Lola and the reason behind it are solved very quickly.  I think the crime is less important because Holmes is attempting to solve it while still struggling with his withdrawal, with the bonus of seeing Ziggy in essence become both Holmes and Watson: a detective and The Great Detective's aide.

One of the great aspects of The Seven-Per-Cent Solution is Williamson's portrayal of Holmes.  His portrayal is of a man, not a machine, a man with a great mind foundering under the chemical effects he has become enslaved to.  Holmes' paranoia, his fears, and his powerful methods of deduction are all brought greater power through Williamson's intelligent performance.  He even manages to bring light moments, such as whenever he is with his faithful Bassett hound, Toby.

It's a bit shocking to see Sherlock Holmes cry when under hypnosis as he reveals his greatest family secret, a scandal that would have brought shockwaves if it had been uncovered.  Here though, is what makes Nicol Williamson's performance so wonderful: he makes Sherlock Holmes human without stripping him of what made Holmes such an extraordinary figure. 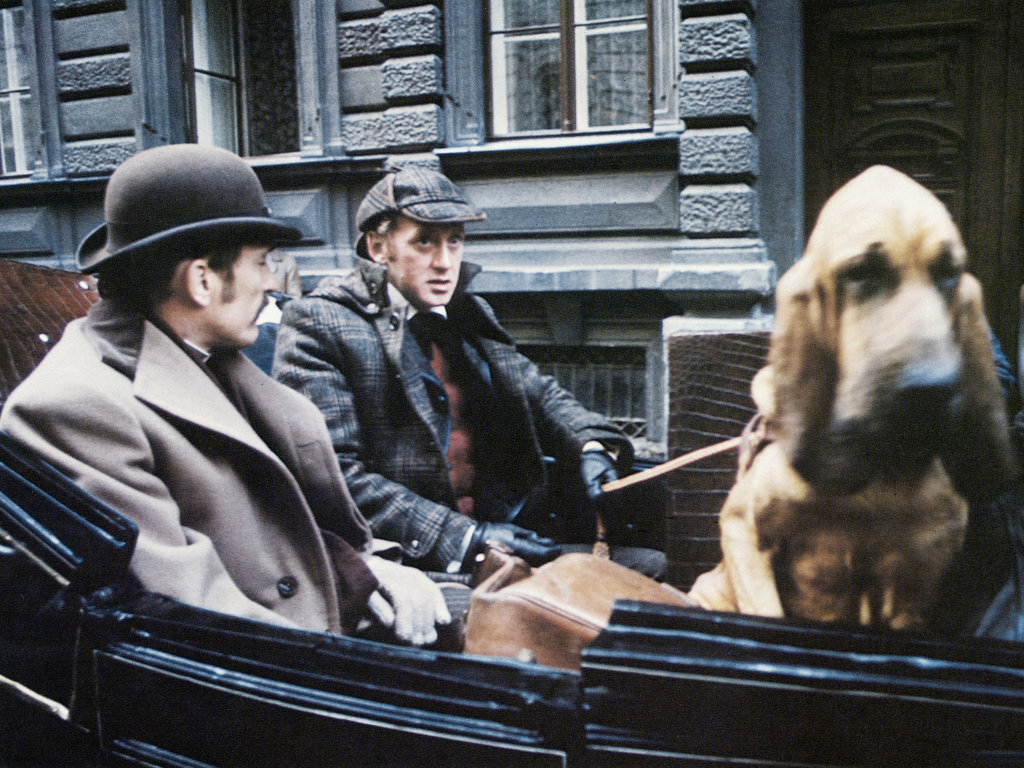 It's a bit surprising to see Americans Duvall and Arkin play British and Austrian characters, complete with accents to match.  I don't think Duvall had a great deal to do in The Seven-Per-Cent Solution, but here, he went against the stereotypical Nigel Bruce-type portrayal of Watson as the blubbering, bumbling idiot.  Instead, he was more the loyal friend, helping a man he loved and admired overcome his private demons.

Arkin was the bigger role, giving Freud a serious tone but showing the good doctor to be equally bright and strong as Holmes.  He also had the disadvantage of anti-Semitism used against him, especially against the bigoted upper classes embodied by the Baron.

A couple of nice surprises were Olivier as Moriarty, less criminal mastermind and more frightened, elderly man, and Grey as Mycroft, forever shrewd and discreet.  In an interesting turn of events, Grey would later reprise his role as Mycroft in the Granada Television adaptations of Canon with Jeremy Brett as Sherlock.  By no means meant to tie the events of The Seven-Per-Cent Solution to anything on the series, it is a nice touch to see Grey recreate his role.

There are a lot of nods to Canon in The Seven-Per-Cent Solution, mentions of past cases and an alternative explanation of The Great Hiatus that Holmesians I think will find delightful.  There's even a song written by none other than Stephen Sondheim sung in a brothel, The Madam's Song, better known today as I Don't Do Anything Twice.

If there is anything to criticize is some events that appear almost silly: Holmes, Watson, and Freud about to be mowed down by stampeding royal horses, and some projection screen that is painfully obvious even then.  Finally, the refueling of the chasing train by tearing down the wooden car reminds one of Around the World in 80 Days, where a similar solution was found to keep the boat sailing.

Apart from these minor points and a mystery that wasn't all that mysterious, The Seven-Per-Cent Solution should be one that true Holmesians should know of.  There are moments of comedy (Freud bemoaning the goings-on of people 'murdering nuns in brothels') and more importantly, a case study of Sherlock Holmes, a man caught in the vice of a terrible condition, and his efforts through therapy to come out of it.  It's mix of seriousness and wit make it a winning combination.