It is quite extraordinary how much has changed between the time of movie star Rock Hudson's death in 1985 from AIDS, the Rock Hudson television biopic five years later, and today.

Where once homosexuality was a virtual death-knell to a film/television career, today there are many actors/performers who are open about their sexual orientation (from Lily Tomlin to The Big Bang Theory's Jim Parsons).  Where once the sight of two men in bed together was all but verboten on television, now we get to see it in almost graphic detail (as in Westworld).

In 1990, when Rock Hudson premiered, the mere suggestion of having two men in bed together was daring, almost scandalous.  Today, we get much more open depictions of gay sex on television and films.  While twenty-six years ago same-sex desires were not depicted on television or film, at least not without causing much controversy, today the concept of same-sex marriage is held as constitutional.

Yet while I digress, I think it's important to put some things in perspective before beginning the review for Rock Hudson.  In 1985 and 1990, AIDS and male homosexuality were still controversial, shocking, which is why Rock Hudson at times dances around both subjects or treats them with kid gloves.

Rock Hudson (or The Rock Hudson Story) is bookended by the events after Hudson's death.  Roy Fitzgerald walks into the office of agent Henry Willson (Andrew Robinson) and says that he wants to be a movie star.  Roy can't act, can't walk, and knows it.  Willson, far from discouraging him, says that this should be no problem.  Roy didn't say he wanted to be an actor.

Rechristened Rock Hudson (Thomas Ian Griffith), Hudson makes the rounds of Hollywood parties, letting his height and physique speak for itself.  Willson gets Hudson a one-line role in a war film which requires him to say "Could you get a bigger blackboard?"  It takes him 38 takes to say that one light right.  Hudson, despite this inauspicious moment, is excited to show the film to his mother, Kay (Diane Ladd).  After seeing his bit part, she whispers to her son, 'Save your money'.

Rock is devastated, pouring his heart out to someone he met on set.  The shock is supposed to be that it is another man: Tim Murphy (Thom Matthews).  Tim and Rock move in together, which doesn't raise eyebrows but which alarms Willson, urging him to be more discreet.  Rock finds more discretion with Willson's new secretary, Phyllis Gates (Daphne Ashbrook).  Like all women, she is immediately besotted by the hunky Hudson, and from all appearances, so is he. 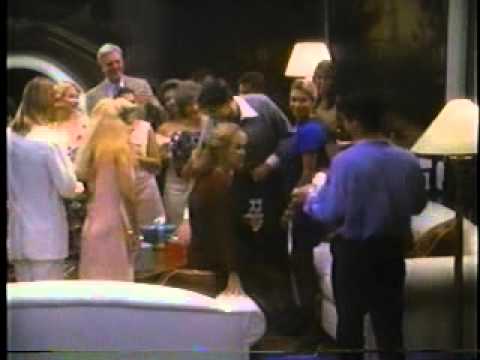 A romance develops between Gates and Hudson, and eventually a disheartened Tim leaves, saying that Hudson is too afraid of being who he really is.  While Hudson does appear genuine in his love for Phyllis, his same-sex desires are simply too great: he goes to gay bars and confesses to a shocked, SHOCKED Phyllis what is what.

A quiet divorce later, Hudson is now chafing under Willson's benevolent dictatorship.  He fires him and now lives a more open life, his new home a haven for decadence kept on the down-low.   He keeps up appearances though, with Kay either being none the wiser or quiet about her son's unique situation.  Still, the decline in his career and the fact that he is living a lie eat at him.

The direction he got during the filming of Seconds: he has a new face but is still the same hollow man he was, are a breaking point for him.  Smashing the window, Hudson all but has a meltdown, with the director forced to clear the set and cradle a crying Hudson.

The last part involves Hudson and his last lover, Marc Christian (William R. Moses): their meeting, his devotion to the aging star, and how he was kept in the dark about something Hudson knew but kept secret.  Rock Hudson had AIDS.

Hudson attempted secret treatment in Paris, but a guest spot on Dynasty cut the experimental treatments off.  After collapsing at his Paris hotel when attempting to return to them, and after a shocking appearance at a press conference for her old friend, Doris Day, the secret and Hudson were out.  Hudson dies of AIDS, and Christian sues the estate for putting him in danger. It might now look tame, almost ridiculous, to see how homosexuality was expressed in Rock Hudson.  The subject was still so touchy and controversial that, like Hudson himself, things could not be openly shown.  Every time the mere suggestion of same-sex attraction was even hinted at, it involved the two men hugging each other.

Granted, they were tender hugs, but hugs nonetheless.  The fact that on each occasion, at least three by my count, they looked like they were going to lean in for a kiss only to end up just hugging makes it a bit of a tease.

It should be noted that in 1990, when Rock Hudson was shown, even the hugging was seen as controversial, almost scandalous.  I think it had to do with the fact that the hugs were as open as television or society could be with regards to sexual intimacy between two men.  The second hug, when Hudson is in the pool with an unnamed figure, was as lush as it could get.

Couple all this dancing around the sexual aspect with how rampant the love scenes were between Griffith and Ashbrook as Hudson and Gates.  If we went by Rock Hudson, we would have to conclude that for a gay man, Hudson certainly enjoyed sex with women.

In the performances, I think Griffith is the least Rock Hudson-looking or sounding person they could have cast.  He made Hudson someone who was almost child-like in his desire to please and get approval from others: his mother, his agent, his wife and his various lovers.  It isn't a great performance, but to be fair at times he was able to show the hurt, even frightened man at the end of his days, when he confesses to Marc that he feared that if he said the word 'gay', he would die, and in a sense, it did.

Incidentally, this was the only time I think that the word 'gay' was used in Rock Hudson.  Earlier, when a brokenhearted and angry Tim ended his relationship with the very closeted star, he used the word 'queer', but it was said so softly that it was hard to hear. 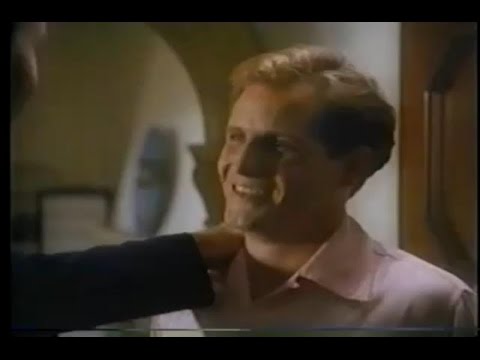 Ashbrook came across as a bit of simpleton with her Phyllis, starting from her first scene where she is clearly floored by the physical beauty of Hudson in Indian garb.  "You're gorgeous," she gushes unwittingly, and from there she is the devoted and loving wife of a man she did not know was gay.

There has been debate as to whether Gates knew the truth about Hudson.  Gates always maintained that Hudson's homosexuality was a complete surprise, while others insist she not only knew but was closeted herself.  Only those involved know the truth and they have left no undisputed proof one way or the other.  Rock Hudson, for its part, shows Gates in a positive light, a good woman shocked and devastated by her husband's same-sex inclinations.

Christian too is also shown as a very sweet, even dim fellow, someone who could genuinely believe that Hudson is dying of anorexia and has to stay in Paris to get non-FDA approved drugs for treating this disease.

The great flaw in Rock Hudson is the script.  It is simply too scared to touch on the homosexuality of Hudson, let alone how keeping the facade of the hunky macho All-American versus his secret desires played together or apart in his life.  It also leaves a lot of questions unanswered, such as whether Kay knew or suspected her son was not straight.  How this court of gay men entered his life when he was so closeted is also something we can't guess at.  It doesn't get at who Hudson was, or why he was so compelling.

It was a bit of a rush job to get Rock Hudson on the screen, but for all the seriousness of the special, Rock Hudson gives us just a thin glimmer of the complex, contradictory life that was Hudson.  It is a nice time capsule of when the idea of same-sex relationships, be they loving commitments or one-night stands could vaguely be hinted at.

The Rock Hudson Story should be told and remembered, and perhaps one day he will get his due: both on the truth of his life and the body of work he left behind.  Until then, we have Rock Hudson and can hope for a better version.