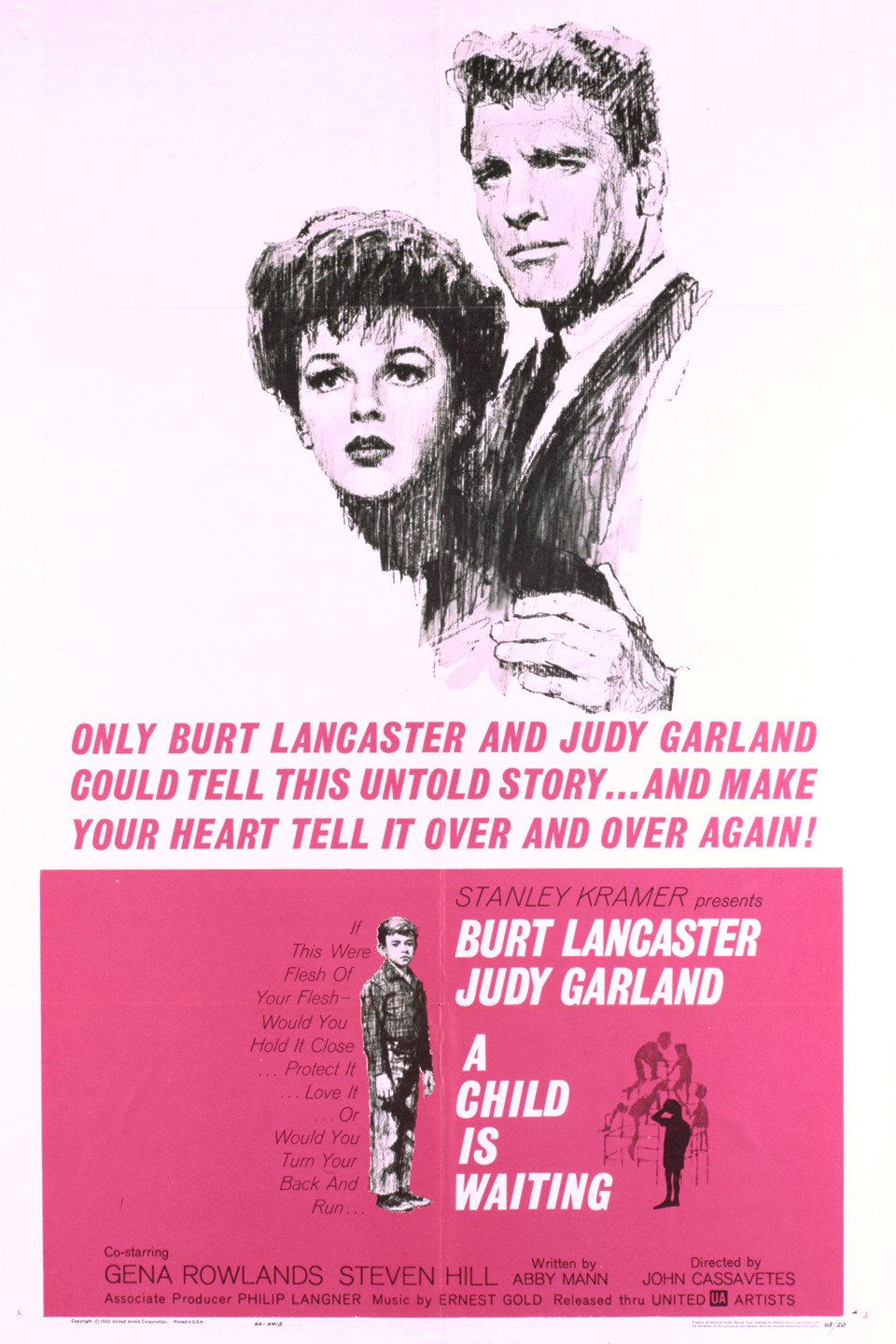 A CHILD IS WAITING

It was rare for Judy Garland to be given a straight dramatic role.  Apart from The Clock and Judgment at Nuremberg, Garland seemed to be pigeonholed in musicals and comedies.  Yes, she had a tremendous voice and was thoroughly charismatic in them, but one always senses that the true depth of her talent was never fully explored.  There were times when she was given dramatic parts where she also sang, such as her final film, I Could Go On Singing, but a straight-up drama?  Those were few and far between.

A Child is Waiting, Garland's penultimate film, is one of those rare dramas, as dramatic as one can get.  This story of retarded children as they were dubbed in 1962 used real disabled children to tell its story.  Appropriately melodramatic, a trifle condescending in the way only progressive ideas now discarded can be, it is a positive in bringing an important issue to the forefront.  It also appears slightly and unintentionally creepy and overwrought, a message picture where the message is no longer as strong as it once was.

Jean Hansen (Garland) comes to the Crawthorne State Mental Hospital looking for some meaning and purpose.  Though she has no experience in education or health, physical or mental, the head of the hospital, Dr. Matthew Clark (Burt Lancaster) hires her to be a music teacher given her musical background.

Crawthorne is a hospital devoted to the care of children who were in the parlance of the era 'defected' or 'retarded', what we would now call special needs children who range from those with Down's Syndrome to various levels of autism to severe mental retardation.  Hansen soon bonds with Reuben Widdicombe (Bruce Ritchey), a child who waits every Wednesday for either of his parents to come visit him.

Jean is very motherly towards Reuben, who appears to respond but who is still a bit remote, aloof from things.  Dr. Clark is not happy about this development and separates them, surprising both Jean and Reuben.  Dr. Clark also has to battle with officials at the state capital who don't see a great benefit to either the state or the children.  They want to know if Crawthorne will help students work within mainstream society, but Dr. Clark firmly rejects the idea that that should be their mission.

Jean opts to go over Dr. Clark and his advise and write to Reuben's mother Sophie (Gena Rowlands).  Thinking he's ill, she is disheartened to know it was a rouse to get her to see him.  Sophie tells them that she didn't come not because she didn't love him, but because she loved him too much.  Unfortunately, Reuben catches sight of her, which leads to him running away from the hospital.

Jean thinks she is doing no good there and tells Dr. Clark that she should go.  Dr. Clark won't stop her, but he also tells her that coddling people like Reuben won't help him.  Furthermore, he takes her to where mentally disabled adults live (the film doesn't clarify if it was at the same facility or not, but it's doubtful adults would be in the same hospital with children), warning her that if she does leave, Reuben may end up so disabled that he may end up here.

It's not what you can do for them, but what they can do for you, Dr. Clark scolds her, telling her this kind of thinking was wrong.  Jean returns and devotes herself to being the music teacher they deserve, and that does mean being firm with Reuben.  The film culminates at a Thanksgiving play, where Reuben's father Ted (Stephen Hill), who has struggled with Reuben's condition, finally sees his son, and sees him slowly speak in public.

Things end full circle, when Jean does what Dr. Clark did at the beginning: slowly coax a child out of the car and into the warm arms of the hospital.

It is interesting that A Child is Waiting, with the timespan of fifty-five years, shows now that what was considered progressive, even daring, now looks a mixture of condescending and patronizing.  At the time of its release, few if any films dealt with mental retardation, let alone featured people who had mental disabilities.  As such, A Child is Waiting is a strong step forward to bringing an issue that affected many out of the shadows.

For too long, the issue of mental disability was kept hidden, something to keep secret.  While not overt, A Child is Waiting makes a very subtle mention of Rosemary Kennedy, the younger sister of then-President John F. Kennedy, who was mentally challenged and essentially hidden away in a mental hospital after her father had her undergo a disastrous lobotomy which rendered her permanently disabled.  Such things still were not openly discussed, and the mystery surrounding Rosemary, while not totally hidden, was still not the stuff of cinema.

However, A Child is Waiting is long before such things as the television series Life Goes On, which centered around the life of a family member with  Down's Syndrome (as a side note, Chris Burke, who played the Down's Syndrome-affected Corky, made some guest appearance as an angel on Touched By An Angel, something that I imagine producer Stanley Kramer would have found more surprising than his own ideas of his forward-thinking film).

And here is where A Child is Waiting runs into problems.  Despite receiving technical support from institutions and doctors, there is still this sense that the film is making wrong advocacy choices.  There is no distinguishing between those who have Down's Syndrome, between those who may have autism, or those who are severely disabled to where it affects them physically as well as mentally.  It lumps all of them into one group, which does a disservice to each group's specific needs.

It also suggests that hospitals like Crawthorne should not work to try and help integrate these three groups into mainstream society.  Rather, it would be better to help them by keeping them safe within the grounds of hospitals, among their own kind so to speak.  In the ensuing years since A Child is Waiting was released, there's been a major shift in thinking on the issue of mental disabilities.

Down's Syndrome-affected people now hold jobs, marry and work as well as possible within society.  Those with autism can receive medical treatment ranging from therapy to medication.  Those who are physically unable to care for themselves would get full-time care.  Still, despite the best intentions A Child is Waiting appears to think that someone with Down's Syndrome is in pretty much the same state as those who are physically disabled.  Today, I think that kind of mindset is rejected, so it makes the film slightly regressive.  It also would perhaps appear now to do what Dr. Clark said he didn't think should be done: coddle them to where they became totally dependent on others when they could do some things themselves.

I think the use of real-life special needs children worked for and against A Child is Waiting.  It worked for them to show that they were children who had the same curiosities and innocence of non-special needs children.  It worked against them because at times some of the images come across inadvertently as garish, almost frightening.  This is particularly the case when we go see the adults who are mentally disabled: the almost-documentary look has its positives, but it might be a bit too jarring for some audiences unaccustomed to these sights.

Part of me understands that it had to be done to get the point across, but part of me thought that by almost jumping into scenes like that with no warning would prove shocking and uncomfortable to viewers who might be struggling when seeing the children.  The adults shown might have been too much, especially since in the film, we practically jump from one scene to the other.

A Child is Waiting, beyond the promises and pitfalls of using children who had mental issues (one child obviously looked into the camera and responded to it, something that director John Cassavetes couldn't control), doesn't skimp on the drama.  The extended flashback sequence where Reuben's parents find their son is 'defective' (the father's words, not mine) has an echo effect along with the voice-over.  It's a way of doing flashbacks that I have not seen or heard before, and I found it quite impressive.

I did wonder about how Garland was photographed for the film, having a sort of glaze in her close-ups that Lancaster didn't.  Give credit to Garland, who worked so well with all the children.  She did have her usual nervous mannerisms as Jean, but one can see the caring, somewhat needy woman Jean was.

Now, I've never been a Burt Lancaster fan, him almost always striking me as gruff, remote, even slightly arrogant.  However, for A Child is Waiting, I figure that was part of his character.

I also figure that the titled character could not have been played by someone with autism to the degree Reuben has (which is what I figure he was afflicted with).  He's called to be very still, unemotional most of the time, but screaming out in pain or rage when feeling abandoned. As such, it would require a professional actor, and Ritchey does extremely well as the waiting child.  You sense the hostility and anger within Reuben, of someone wanting to be loved, wanting to fit in, but not knowing how.  You also sense his distinct aloofness mixed with sadness at what he might see as rejection.  It's a strong performance.

It's at this point I'd argue Reuben is autistic rather than 'defective' or mentally disabled, which makes his time put away in an institution seem almost excessively cruel.  Rowlands and Hill don't make the parents, who divorce shortly after institutionalizing Reuben, into heartless people, well, at least Rowlands doesn't.  Hill is less sympathetic but one who also struggles with guilt about his son's condition.

Ultimately, A Child is Waiting is a sad film, but not one that leaves you completely hopeless, at least when it comes to Jean.  She's found her purpose in life, but whether it would have been better to have  helped those with special needs find their own purposes one leaves up to the viewer.