There is much to admire and respect about Dunkirk, the newest film from auteur Christopher Nolan.  It's like most Nolan films: well-crafted, non-linear, and a bit remote and aloof.

It is also his most naked 'Please Give Me an Oscar' film to date, and there's nothing wrong with that.  Dunkirk is a story that should be told, needs to be told, and is told exceptionally well. It is also slightly a little removed from the viewer, keeping us a little unable to embrace it and give it the love this story merits.

Dunkirk is split between three stories which come and go and sometimes cross.  The Mole is on the actual beaches of Dunkirk, as the British Expeditionary Force slowly attempts to evacuate, trapped between the English Channel and the Nazi forces surrounding them.  The Sea is of the various civilian ships that form a flotilla to rescue the stranded and desperate men at Dunkirk since the British Navy ships are too heavy for the beaches.  The Air is of the Royal Air Force fighting the Luftwaffe to stop them from causing more havoc to the men at The Mole.

The Mole features a group of soldiers attempting to survive long enough to escape back to Britain.  At first we see individuals, though we don't learn many of their names, and out of need, they soon start forming small groups.  The Sea probably has the most character-driven arc, down to having names.  Mr. Dawson (Mark Rylance), along with his son Peter (Tom Glynn-Carney) and Peter's friend George (Barry Keoghan) take their boat to Dunkirk, picking up someone credited as 'Shivering Soldier' (Cillian Murphy), who has managed to survive his ship bombed and who is desperate to not go back despite Mr. Dawson's mission.  Mr. Dawson's ship also eventually manages to rescue Collins (Jack Lowden), who is one of the pilots from The Air.  His fellow pilot, Farrier (Tom Hardy) continues his mission despite having low fuel.

At The Mole, the various boys continue to struggle to survive this nightmare, while Commander Bolton (Kenneth Branagh) continue working and worrying over the fate of the men.  At one point, it looks like some of the boys will make it, but their ship is bombed as well, forcing them back to Dunkirk.  Even after taking shelter in an abandoned boat, fear and paranoia threaten to overwhelm them. That paranoia leads one of the boys, Alex (pop star Harry Styles) to accuse one of their own, known as Gibson (Aneurin Barnard) of being a German spy.  It's Gibson's friend Tommy (Fionn Whitehead) who reveals that Gibson doesn't speak not because he's German, but because he's French, having stolen Gibson's clothes with Tommy's help in an effort to survive.  That effort failed, as Gibson drowns in the sinking ship they took refuge in, while the others, including Alex and Tommy manage to escape.

Eventually, our boys Tommy and Alex make it onto Mr. Dawson's boat.  Mr. Dawson continues to keep his head and British stiff upper lip, even after Shivering Soldier's panic causes an accident that, unbeknownst to the soldier, causes George's death.  Once back in Britain, Tommy reads the headlines, which detail a defiant Churchill's call to 'never surrender'.  Peter takes George's story to his local paper, which puts it on the front page, something that George wanted.  Ferrier manages to land on occupied soil and is taken prisoner.

I leave it up to viewers to decide whether or not the fact that we don't know many if any of the soldiers is a plus or a minus.  Apart from The Sea, we get little to no indication as to who the men at Dunkirk are, at least the regular soldiers.  I think this is Christopher Nolan's intention, to not make this a film about heroic individuals but of young men surviving.  The only things we know about the boys at Dunkirk is that they are young, find themselves in horrifying situations, and are desperate to survive this ordeal.

I figure Nolan wants us to see them as 'every man' and not get hung up on them as individuals with backstories, all the things most films in general, war films in particular, would give us.  They are meant to be boys not crazy with courage but not sinking into total collapse.  We see them as people who want to live.

Dunkirk is not a film that celebrates the events, that lauds the extraordinary feats of generals or troops.  It is not so much a war film as it is a survival film.  In some ways, Dunkirk is a horror film: the stillness at many moments punctuated by the terror of whether or not certain individuals will survive.

About the moments of actual character exploration are on the ship with the Dawsons and when the various boys are trapped on the abandoned boat, waiting for the tide to set them sail, something that will cost lives as the Nazis have been using the boat for target practice, blowing enough holes to sink it once the tide does come in.  Apart from those moments of confinement, Dunkirk doesn't stop to give viewers knowledge into who these people are.  You're given just enough and left to your own devices about who they are. 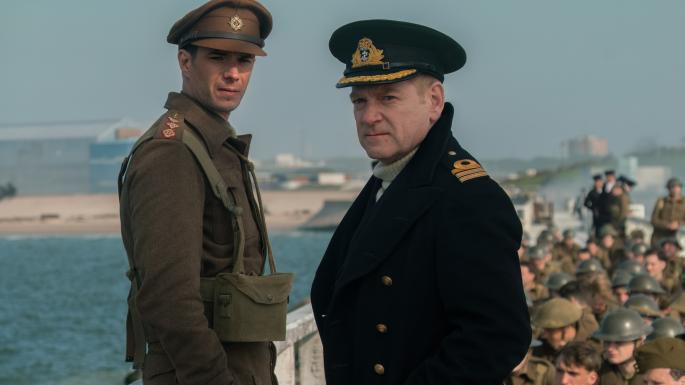 As a lot of Dunkirk is dominated by silences, Hans Zimmer's score fills in the film almost continuously.  Zimmer uses a ticking clock in much of the score that suggests how time is indeed running out for the men.  At one point, I detected Zimmer using hints of Sir Edward Elgar's Nimrod of the Enigma Variations, invoking the British reaching a point of deliverance to their desperate plight, a moment of triumph in the face of overwhelming odds.

In a film like Dunkirk, which is not an actor's film in that we don't get big moments, it's hard to give assessments to performances.  The acting was not the great draw in Dunkirk.  Apart from Rylance, who probably got the deepest role, and Branagh, who among the cast is the only one who can command the screen with little as the stoic yet concerned commander, these are not performances that are meant to stand out come award season time.

I'll walk that back a bit with regards to Murphy, who gave a fearful and regretful tone to his 'Shivering Soldier'.  When it came to our younger performers, Barnard (whom I loved in Citadel, a highly underrated film in my view) and Whitehead were strong as the boys who bond out of necessity.

Let's at last turn to Styles, whom Nolan claims to have not known was a member of the wildly popular boy band One Direction.  His role as Alex was small, so to all the Directioneers, he won't be winning a Best Supporting Actor Oscar anytime soon.  He did well in his first major role, but whether this will lead to him being able to carry a whole film without relying on his voice or looks is too soon to say.  As the character of Alex, like almost all the characters in Dunkirk, were more sketches than fully-fleshed figures, Styles doing well with a thin character doesn't say much for him.

Hardy did well in his much smaller role as well, and was covered up a great deal of the time.  At least he wasn't as surly as he appears to be on and off the screen.  I do wish Tom Hardy would make a comedy where he gets a pie thrown in his face.

Dunkirk is a triumph, not just in terms of the film but of the event itself despite it being an evacuation and military disaster. Meticulously crafted with Nolan's steady and sharp eye, gripping you with the tension and horror of the event, it is a brilliant film.  Yet it also is a film that kept me a bit at a distance.  I could not embrace Dunkirk completely.  I could admire it.  I could respect it.  I could easily see it again.

And yet, it remains ever-so-slightly removed, as if I were meant to be an observer to the events instead of a full-on participant.

I admire and respect that Dunkirk avoided a lot of cliches and temptations to paint the evacuation as more heroic, more triumph of the human spirit, and put it at ground level of people doing what they can to make it to another day.  Dunkirk is an excellent film and probably the definitive film on this turning point in history: respectful of those who were there without skimping on the horrors they endured.  It is triumphant without chest-thumping, courageous without being excessively heroic.

And yet, and still, something still keeps me slightly removed from it all.