Gotham: All Will Be Judged Review

GOTHAM: ALL WILL BE JUDGED

Politics, Shakespeare wrote, makes for strange bedfellows.  The alliance of Oswald Cobblepot, aka The Penguin, and his thwarted love Edward Nygma, now known as The Riddler, makes for stranger bedfellows (though Pengy would have preferred a literal bedfellow).  All Will Be Judged, to me, seems like a slight slip on our way to Gotham's season finale, mostly due to a plot point that I am not for one minute buying.

Oswald (Robin Lord Taylor) and Edward (Cory Michael Smith) find themselves prisoners of the Court of Owls.  Their dislike and downright hatred for the other knows no bounds, with one constantly upstaging the other.  Pengy won't use the title 'The Riddler' for/to Ed, finding it idiotic and knowing it annoys him that Penguin won't call him that.  Ed doing all he can to thwart Pengy's plans. This plotting/counter-plotting reaches a nadir when Ed manages to get a pick to unlock himself, drugging Penguin so that he can escape.  Defiant and bitter to the end, Penguin makes enough noise before passing out to attract the guard's attention at Ed's escape attempt, which they punish severely.

They decide that the only way they can escape is to have a truce and work together.  In exchange for not sabotaging the other and a six hour window where they won't kill each after they escape, they manage to break out of the Court's grasp.  Once out, their war continues, with Pengy giving Ed a bit of news: he has an army, from the monsters of Indian Hill.

They will meet again.

Meanwhile, the Court has more important matters to attend, planning that attack on Gotham.  To help them stop Detective Jim Gordon (Ben McKenzie) and acting Captain Harvey Bullock (Donal Logue), they send their former Captain, Nathaniel Barnes, now known as The Executioner (Michael Chiklis).  The Executioner will enact justice on James Gordon, down to having a 'trial' where he will be found guilty.

Might as well call it a Kangaroo Court rather than Court of Owls.

There's another problem awaiting everyone.  Faux Bruce has been unmasked thanks to Selina Kyle (Camren Bicondova), though it took a little longer to convince Alfred (Sean Pertwee) of this. Faux Bruce escapes, while Real Bruce Wayne (David Mazouz) is still under the spell of The Shaman (Raymond J. Barry), who has worked his magic on him to where he is now totally within his power.

Bruce's destiny, as prescribed by The Shaman, awaits.

Throwing in all this wildness around The Executioner, who has sprouted a hand with a blade capable of cutting heads off as he demonstrated during his raid on the GCPD HQ by working his magic on an unsuspecting and disbelieving Kathryn (Leslie Hendrix), we had another crime at HQ.  Dr. Lee Thompkins (Morena Baccarin) has decided she is responsible for what happened to Mario, and decides the way to atone is to inject herself with the Tetch virus, unleashing her own dark side.

I think part of my if not dislike but disinterest in All Will Be Judged has to do with the non-Penguin/Riddler storylines.  The Nygmogglepot storyline was good, and the double-act of RLT & CMS continues to do well.  To see these two constantly thwart and needle and mock each other was both amusing and slightly disturbing.  Smith does such great work whenever he finds that Pengy won't call him by his chosen name, a surprisingly touchy subject for our Riddler.  Taylor for his part matches him as he seems determined to play at being powerful despite all evidence to the contrary.

I even think that the use of red Jello as the 'blood' for when they escape may be a wry commentary on those of us who criticize Gotham for its graphic violence.  Perhaps they showed us that, while it looks convincing, we know it isn't real. 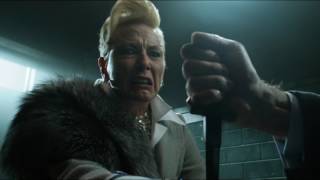 That may be reading too much into it, but Gotham still has a surprising level of graphic, I daresay, gruesome amount of violence.  Seeing Kathryn decapitated was not as graphic as when the dock worker was beheaded in These Delicate and Dark Obsessions a few episodes back, but it still was a bit much for my tastes. And that comes after watching Alfred stab Kathryn in the hand, where Gotham didn't pull back...and seeing a dream sequence where Lee's late husband Mario Calvi (James Carpinello) cuts his wrists and serves her his tainted blood.

That's an awful lot of bloodletting for one hour.

I also question why Kathryn didn't just run off during the chaos at the GCPD HQ (and as a side note, is this the third or fourth time the GCPD HQ has been attacked?  I lose count).  Her all but ordering The Executioner to get her out of there when she was perfectly capable of doing it herself strikes me as dumb.

As does the GCPD facing yet another attack.
As does Lee injecting herself with the Tetch virus.
As does the last-minute rescues of Jim Gordon.
As does The Shaman's continuing Wisdom-Speak gobbledygook.

I also found Chiklis to be quite camp as The Executioner.  Now, I grant that I'm not well-versed with Batman lore as others are, but something about Chiklis here I find endlessly amusing versus threatening, as if I'm supposed to laugh at The Executioner's outlandishness rather than be terrified by his twisted sense of justice. 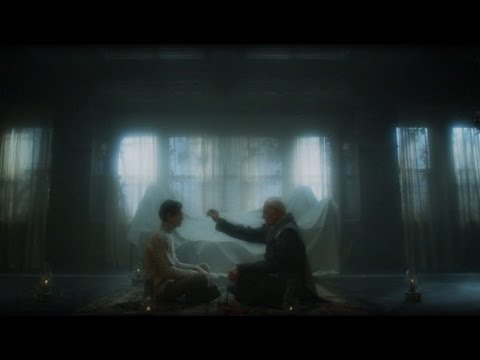 I found Baccarin a bit camp too as the tormented Dr. Thompkins.  Look, I get that you are still upset and conflicted about the whole 'ex killed husband on wedding night even if said husband was insane' thing.  I can even get that you feel some sense of guilt over the whole sad, sorry affair.  However, injecting yourself with that same virus still never struck me as a smart move, let alone a sensible, rational, or plausible one.

I can sense a bit of a slow pace, particularly with Gordon's 'trial', which felt a bit drawn out.

There were good things within All Will Be Judged: the Taylor/Smith duel (Penguin telling Riddler, 'in shooting me, you have me something to live for: revenge' was a good line and good line reading), the epic fight between Faux Bruce/Selina/Alfred.

However, I figure that some things don't ring true (the camp Executioner, Lee doing her version of self-medication), some things find themselves repetitive (one would think the Gotham City Police Department Headquarters would have done some work to keep the crazies out), and some things flat-out bonkers (dear Kathryn, after getting stabbed in the hand, it's not a good idea to argue with a man with a blade for a hand).

Next Episode: Pretty Hate Machine
Posted by Rick at 2:58 PM