Out of all the Marvel characters, I think I am closest to Spider-Man.  I was and am not a comic book reader, but our friendly neighborhood Spider-Man has had a special place in my heart. Spider-Man: Homecoming is the third variation on Spidey that we have had.  Before I saw the film, I thought Tobey Maguire's version was the best and Andrew Garfield's the worst.

How would Tom Holland, the second British actor but the one closest to Peter Parker's actual age, fare in our Battle of the Arachnids?

He was great.  It's almost everything else about Spider-Man: Homecoming that was lacking.

Peter Parker (Holland) is attempting to balance his high-school life with dreams of being an Avenger. He's still on a metaphoric high after his actions in Captain America: Civil War (which like any good Millennial, he recorded).  However, his mentor Tony Stark (Robert Downey, Jr.) has not called on him since then.  Peter wiles away the hours doing good works around his neighborhood, constantly contacting Stark's right-hand man, Happy Hogan (Jon Favreau), and getting nothing for his troubles.

He also has little to show for his school either.  His obsession over the 'Stark Internship' keeps him from doing all sorts of other activities.  He even has to drop out of the Academic Decathlon, much to the delight of his nemesis, Flash (Tony Revolori), the general disinterest of Michelle (Zendaya), the consternation of his best friend Ned (Jacob Batalon) and then there's Liz (Laurie Harrier), the beautiful and bright girl Pete has his eye on.

One fateful night, Ned discovers Peter's secret, and like all good nerds, immediately goes all fanboy on him.  It gets to where, overhearing how Liz has a crush on Spidey, Ned blurts out that Peter knows him.

While Ned's minor revelation causes Peter some problems, it does give him an accidental chance to do more crimefighting.  Already having come across criminals using alien technology to commit crimes, Peter manages to stumble into a weapons sale.  He is nearly done in by Ned's over-enthusiasm at Liz's party which Peter had to ditch and saved by a convenient Stark.

Upon finding that the weapons lair is in Maryland, guess who is back on the Aca-Dec Team in time to go to Washington, D.C.?  Here's a hint: Flash ain't happy being made First Alternate.

In D.C., Peter, thanks in part to the nifty new suit Stark gave him, complete with voice-activation Pete names 'Karen' (Jennifer Connelly) attempts to take down the bad guys.  That only leads him to miss the Aca-Dec and save the team trapped in the Washington Monument.  He manages to survive that, but makes a mess out of a planned capture of the villain on the Staten Island Ferry.

Oh, yes...the villain, have I not mentioned him?  It's Adrian Toomes (Michael Keaton), a regular working-class guy who eight years prior after the events in The Avengers got accidentally screwed over by Stark.  He managed to get hold of alien technology back then and has been living off the profits of its weaponized uses since.

After bungling that, Spidey is essentially put on time-out, where Peter learns to be simple and a regular fifteen-year-old.  He also has the courage to ask Liz out to Homecoming, and she surprisingly (to him) says yes.  At Homecoming, he gets the ultimate surprise regarding Liz and Adrian, and then has a final battle to stop Adrian from getting his hands on more alien technology.

Redeemed, Stark welcomes him back, but Petey opts to stay on the ground, for now, though as a parting gift, he gets a new Spider-Man suit...much to the shock of Aunt May (Marisa Tomei).

I figure that the best way to summarize Spider-Man: Homecoming is in the ending credits scene where Captain America (Chris Evans) essentially mocks those who stayed behind. Every so often during Homecoming, Cap talks to bored students via 'cheesy' videos about all sorts of things: health, detention, and such. At the end, he talks about how patience is sometimes rewarded, sometimes not, then asks how many more of these videos he has to do.

The filmmakers were obviously laughing at whoever opted to stay around to the very end of the credits, which I did against my better judgment.

There's witty and then there's lazy, and Homecoming fell somewhere in the middle though more on the lazy side.  I get that a lot of people loved the film, but for me, I was left slightly numb by how uninteresting a lot of it is.

I think a lot of what I disliked about Homecoming was in how much time it took to get to whatever the main story was.  This, and many other faults in it, are the result of having six people credited with the screenplay (though I suspect there were more hands involved).  It should not take six people, including director Jon Watts, to write something like Homecoming, which isn't an origins story. There really couldn't be an origins film since Civil War pretty much got his story rolling.

There was a lot that could have been trimmed or cut, starting from his long intro to give us a highlight reel of the battle in Civil War, down to the few scenes Tomei was allowed to be part of, or Liz's birthday party or Peter's early do-gooding that seemed to go on and on.  Parker, temporarily trapped in the Department of Damage Control warehouse, spends what he thinks is hours discussing with his handy-dandy Karen everything from his love for Liz to why Stark doesn't make him a full Avenger.  The 'joke' comes in in that he has been in there for just fifteen minutes.

I'm sure they all thought it was funny, but to me it was symbolic of how Homecoming took a long time getting nowhere.

Almost every time they went for laughs, I more likely groaned.  The fan-service of the iconic kissing scene from the first Spider-Man had audiences laughing, but more out of contempt than genuine humor.  His voice change with his 'enhanced interrogation techniques' also fell flat because they weren't necessary; in fact, I thought them too distracting. 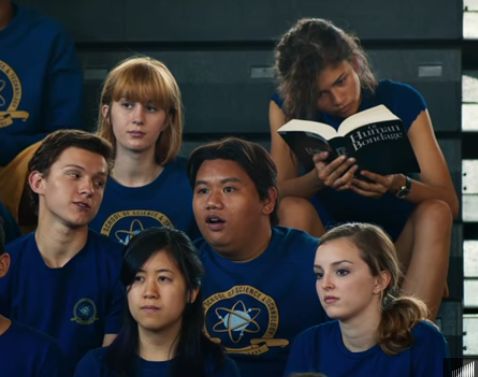 The deus ex machina of something (usually Stark) coming in to literally swoop in to save Spidey was also a bit hard to take.  I found Batalon's Ned much harder to take, as he quickly went from 'funny nerd' to 'annoying idiot' in seconds. He went beyond parody to where I would have been thrilled if the building had fallen on him and his hat.

I have been told that Homecoming was not going to be just a comic book film but a variation on a John Hughes teenage-centered film.  I didn't find that it was a particularly good fit because, as in Homecoming, one would always interrupt the other.  As a side note, despite the fact that Peter Parker essentially went missing during the Academic Decathlon, nothing really came of it (something that makes me wonder exactly who was minding the store).  Their Aca-Dec coach seemed perfectly happy to take the kids to a celebratory tour of the Washington Monument versus, perhaps calling the police.

Parker, far from being expelled from school, is merely put in detention.  No one wonders where he went in Washington, or from Liz's party for that matter.  If you introduce something, why then pull back again and again?

When it comes to Holland, he was spot-on.  At 20, he is the youngest actor to play Peter Parker, and he is not just believable as a 15-year-old high school student from Queens (especially compared to the then almost 30-year-old Garfield when he took his first turn).  Holland brings the insecurity of Peter, the desire to be an Avenger and in essence, to be something greater than, if not for a radioactive bug, he might have ended as.  In his eagerness, in his clumsiness, in his growing maturity, Holland makes a great Peter Parker and Spider-Man.

In regards to the rest of the younger castmembers, we might have a case of too much of a good thing. On the plus side, Homecoming has done great work in opening up roles for minorities.  We have a smorgasbord of diversity among the players: Filipino, Guatemalan, and at least three African or African-American performers with at least one character being biracial.  On the minus, I could not shake the idea that the filmmakers were determined to make every casting decision for the high school parts strictly on representation.  At times it looked like Peter was the only white male at the school, unless you count the Hasidic Jew briefly seen in the background.

I support representation and opening up roles that don't strictly call for a specific race/ethnicity.  I do think that perhaps Homecoming might have gone overboard, particularly if it meant tying Liz with Adrian in a 'shocking' twist that is more for 'drama' than for anything else.

Batalon, as I might have mentioned earlier, proved thoroughly annoying as Ned, down to his cell phone profile, though that might be due to the part rather than him.  Revolori wasn't my idea of a major threat, which Flash always was, more whiner than real-life bully.  Zendaya is famous for something, I'm not sure what, but her Michelle or 'MJ' as she told us didn't add anything more than constant sarcasm.  Harrier was good as Liz, but sadly wasn't given all that much to do.

As a side note, any film that does not make good us of Garcelle Beauvais and relegates her to one scene (technically two but if memory serves correct she was silent in the second) should be publicly horsewhipped.  Same goes for the bad misuse of Tomei, who apparently was there simply as eye-candy to every guy and Ned that came her way.  Yes, she's the hottest Aunt May in history, but it's sad when you could have cut her out of the movie completely and not have her absence affect the film.

Keaton was a bit wild as Adrian/Vulture, his motives taking a page from a mobster movie.  Downey, Jr. and Favreau were there I think just to tie things to the larger Marvel Cinematic Universe, and while not slumming they didn't look particularly engaged.

Part of me doesn't blame them, as Homecoming is more strictly the kids' domain.

Watts would be well-advised to rethink his visual style, as the climatic battle between Vulture and Spidey was jumbled and hard to follow visually.  You had the requisite action sequences, and while the Washington Monument one was strong and the Staten Island Ferry one wasn't terrible, I wasn't thrilled by either.

Spider-Man: Homecoming is an odd fit: part teen dramedy, part comedy, part action, part action-comedy, part drama, with none of them working in tandem.  It is a film by committee, one where a checklist was given to those involved and they were told to put in everything on it without real regard to how it worked or if it worked at all.  Apart from Tom Holland, I didn't find anything in Spider-Man: Homecoming that was thrilling, funny, intense, romantic or sometimes even logical.

Holland is growing in my mind as the best to interpret the character.  However, he needs better material if he wants to make full Avenger.