The Doctor's Dilemma: A Review 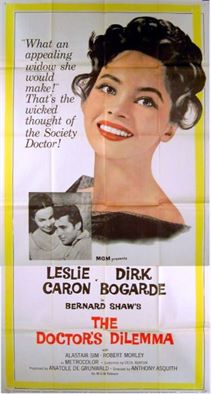 I can't say that George Bernard Shaw is forgotten, but it seems that a lot of his work isn't as well-known as perhaps it should be to the general public.  Apart from Pygmalion and the musical version, My Fair Lady, I don't think most people would be able to name another Shaw play.  I think it is high time for a cinematic Shaw revival, even if something like The Doctor's Dilemma may have a hard time with the current trend to 'update' stories set in the past.

Actually, on that point, I think I may be wrong.  The Doctor's Dilemma may actually be one of the better choices for an update, especially since something like Mrs. Warren's Profession might not be so scandalous given how open current society is on the matter of selling sex.  I've no way of knowing whether this version of The Doctor's Dilemma sticks close to the original as I have not seen a formal stage production of the play, but I suspect it is true to how the work is.  The Doctor's Dilemma, while a bit stuffy now, has moments of wit, humor, and heart that all but call for a remake.

Colenso Ridgeon (John Robinson) has just been knighted for finding a cure for consumption (tuberculosis).  He receives various colleagues with delight, but there is one person he does not wish to see: Jennifer Dubedat (Leslie Caron), the wife/model of a dying artist, Louis (Dirk Bogarde).  Despite his insistence Mrs. Dubedat will not be denied, even offering a bribe to the housekeeper to let her see him.  Reluctantly, Sir Colenso relents.

He insists that his revolutionary treatment is very limited and he can help only a certain number of people.  However, he finds Mrs. Dubedat extremely attractive and charming, and he finds Louis' work exceptional.  Such a talent should be saved, and Sir Colenso agrees to squeeze him in to the treatments, though he has to pass a morals test with Sir Colenso and his three colleagues.

At the dinner party Louis manages to charm all of them: Sir Colenso, the surgeon Dr. Walpole (Alistair Sim), the specialist Sir Ralph Bloomfield-Bonington (Robert Morley), and the retired doctor Sir Patrick Cullen (Felix Aylmer).  They all agree Louis Dubedot is a genius and that he should be saved.  They also see Louis is a scoundrel: he cheats them all out of money and we find that the housemaid is in fact, the real Mrs. Dubedat, with Jennifer unaware that she is committing bigamy.

However, things get complicated when a colleague of Sir Colenso, Dr. Blenkinsop (Michael Gwynn) reveals he too has a touch of the consumption.  Dr. Blekinsop is not only a colleague and friend, but a much-needed doctor who unlike the others is not a quack.

Hence, the doctor's dilemma: whether to save his friend the good doctor or the talentless but moralless artist.  Things are more complicated when we find that the bachelor Sir Colenso has fallen in love with Jennifer.  Will he let lust cloud his judgment?  Will he allow for genius such as Louis' to go the way of all flesh or will he work to save a much more moral figure who will be unknown to history?

One of the curiosities in The Doctor's Dilemma is that it starts out with a bit of voice-over by Sir Patrick but after a while that goes by the wayside.  It's good voice-over in that it allows us to see Sir Patrick as one with a jaded eye towards his profession, which he see as populated by a lot of quacks who have either little interest in actual health or are just plain stupid.

I suppose director Anthony Asquith dropped that bit thanks to Anatole de Grunwald's adaptation of Shaw's play.  It is clear by both the performances and the script that the doctors, in particular Walpole and Bloomfield-Bonington were idiots.  It is good to see Sim and Morley play such pompous fools, and they do it so well. Morley in particular seems adept at playing thick-headed individuals to where he made a career out of it.  In his efforts to sound intelligent with his talk of various blood materials his idiocy comes completely through.

Sim, best remembered as Scrooge in one of the many A Christmas Carol versions, shows, makes most of his tottering surgeon who thinks everything can be cured through removing this, that and t'other.

It took a while to recognize Dirk Bogarde as the amoral Louis, and to be honest, I don't think he was as good as he could have been as Louis the Loser.  It's almost as if he and Asquith wanted some audience sympathy for the devil when making him totally sleazy save for Jennifer might have done a bit more.  I thought Bogarde a touch theatrical.

Caron too was a touch overly dramatic but I think Jennifer was meant to be slightly overdone, her near-total worship of Louis to where she's blinded to his true nature a major part of her character. Still, Caron did show a strong nature at the end when she coldly rejects Sir Colenso for not having cured her husband.  It shows a tough, unforgiving manner to her, understandable given the circumstances.

The screen adaptation is particularly strong, though at times the film cannot fully escape its theatrical roots.  The movie, however, shows how slowly, steadily, Louis twists the doctors' morality against them, to where what Sir Colenso said earlier in regards to Louis makes some sense.

"It's easier to replace a dead man than a good picture".

Joseph Kosma's score at times is a bit overdramatic, punctuating moments of intensity when they need not be punctuated, and sometimes the sets and costumes are a bit more stage-bound than perhaps would have been good.  It might also have been good to have seen some of the good work Dr. Blenkinsop did and the artwork that so impressed the various doctors.

On the whole, however, The Doctor's Dilemma is not a bad way to spend some time with Shaw.  It is a story that works quite well today, whether it is set in Edwardian England or the present-day, as new technologies and human trials continue leaving doctors and scientists with various ethical questions, some that might even involve the heart.