Gotham: How The Riddler Got His Name Review GOTHAM: HOW THE RIDDLER
GOT HIS NAME

I guess with a title like How The Riddler Got His Name, we can pretty much guess where the focus of this Gotham episode is.  Fortunately, this episode also brought us some fine work from other cast members, gave others a chance to shine, and gave us more wild twists.

Edward Nygma (Cory Michael Smith) has been struggling in finding a worthy mentor to help him develop his growing criminal persona.  He's also seeing images of Penguin (Robin Lord Taylor), whom he always sees dripping wet due to that 'killing best friend and dumping him into Gotham Harbor' bit.  Nygma wants to prove that he is his own man and now someone who was, or is, dependent on Penguin.

He then shifts his attention to finding, not a mentor, but an enemy, someone he can do battle with.  He first sets his eyes on Detective Jim Gordon (Ben McKenzie), but then enters Lucius Fox (Chris Chalk), who works for the GCPD.  He is the only one Nygma has found who comes close to Nygma's view of his intellectual prowess, and our dear Ed decides Fox, whom he calls 'Foxy' (and I leave it to you to decide the what and why for this nickname) will be the perfect advisory.

Up at Wayne Manor, Bruce Wayne (David Mazouz) still pines for Selina Kyle, and appears to have received a note from her.  She denies it, and here, Bruce finds himself abducted and replaced by his Indian Hill-created doppelganger.  When False Bruce shows up, Alfred (Sean Pertwee) senses something is wrong, but can't quite put his finger on it.  Gordon, for his part, is attempting to bond with his long-lost Uncle Fred (James Remar), but it's not going well.  Fred tells Jim about the Court of Owls, and their hand in the death of Jim's father.

Fortunately for everyone, we find that Pengy is very much alive, having been saved by none other than Ivy Pepper (Maggie Geha).  He is finally awake and alive, and ready to kill someone.  Bruce finds himself lost in a mountain temple of some kind, and after talking with Fox, Nygma finally becomes 'The Riddler'. 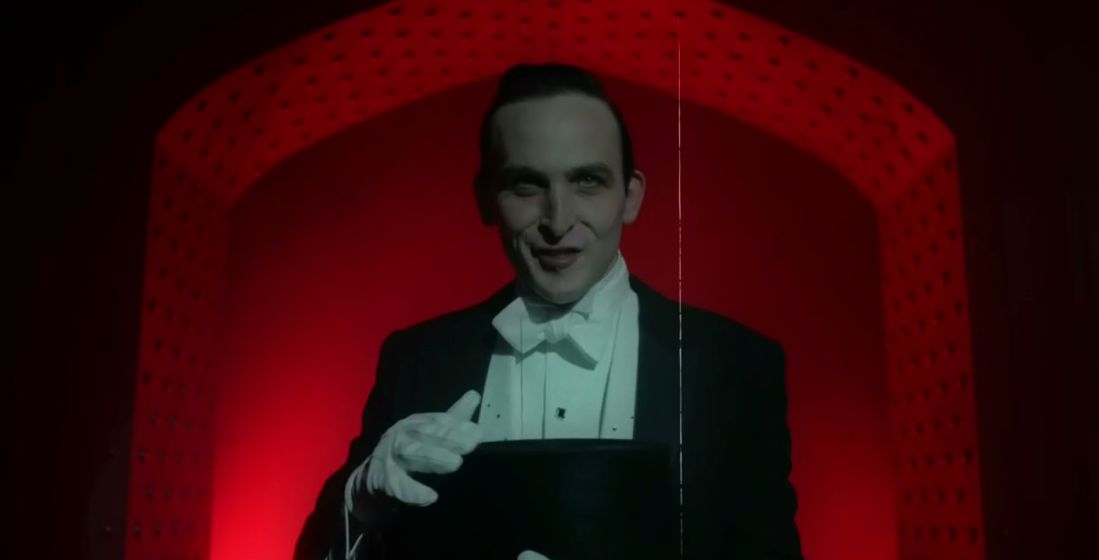 How the Riddler Got His Name has some simply wild moments, moments that pretty much leave one if not shocked at least astonished at their brazenness.  Perhaps one of the wildest moments in all Gotham history is the sight of Robin Lord Taylor getting his Emcee from Cabaret on, doing a weird, I daresay, unhinged rendition of Wake Up Alone to a drugged-out Nygma.  Apart from showing the technical skills RLT has an actor (and apparently, a singer too, his musical versatility already having been shown on Gotham), it is a flat-out bonkers scene, coming so far out of left field it all but stuns you.

With the dominance of red, the Dutch angles and sketchy shots, it looks like a fever dream from the bowels of Hell itself.  The cinematography of Gotham has always been brilliant, but few times has it been as well-crafted and displayed as it is here.  When Nygma finally reveals his nom de guerre, the lighting on it looks almost divine without being exaggerated.  I do wonder, however, if Fox should have known to look in the back of his car.

How the Riddler Got His Name isn't just a showcase for Smith, though it is that.  Smith's Nygma fully embraces the dangerous, demonic, diseased brilliance of our formerly meek puzzle-master.  He is in turns gleefully wicked and completely unhinged, drugged out bonkers and coolly rational, a complete performance.  The aforementioned RLT also seems to be having fun and being a bit naughty as our 'drug induced hallucination', one who tells it like it is without worry (and throwing in a little soft shoe just for funsies).

It also gives an expanded role to Chalk's Lucius Fox, who at times seemed to be almost forgotten.  Here, we see that Fox is bright but a bit of a square, someone who is genuinely puzzled when Donal Logue's Captain Bullock suggests he beat a suspect.  He manages to hold his own against the tornado that is Smith as Nygma, the cool rational figure to the crazed supervillain.

Logue too manages his own great moments, whether it's his attention to his speech at the GCPD Academy graduation or in how he throws off one-liners without sounding ridiculous.  As he is barely hanging on to dear life with three ropes holding him from plunging to his death while Fox and Nygma have a battle of wits, he screams, "Why is it always three lines?  Why can't it be four?"  When Fox approaches Bullock about the seven people he suspects have been murdered for reasons unknown, Bullock asks, "You think there's a serial killer of smart people?"

I might not have gotten the quotes exactly right, but that gives you an idea of how Logue has made Bullock into the wisecracking policeman who manages to keep things both in perspective and relatively sane.

It almost seems that the Wayne story and the Gordon family story are kind of lost there, and with reason: How the Riddler Got His Name should be Nygma-focused.  They are just setting up their stories here.  Also, it seems that poor Pengy has an odd habit of being saved by a supervillain.  Last time, he was saved by none other than Edward Nygma.  Now he gets saved by Ivy Pepper, though given Penguin's predilections, it's unlikely he will fall in love with the future Poison Ivy.

With great performances all around (particularly from Smith, Taylor, and Chalk) and a surprisingly low level of violence (unless you count that bonkers showstopping number from a dead Pengy), How the Riddler Got His Name is a standout Gotham episode.  It was brought down a bit by two subplots that while necessary, didn't add all that much to the wild and weird goings-on.

Maybe if Jim Gordon had dusted off a top hat and belted out You Know I'm No Good...

Next Episode: These Delicate and Dark Obsessions
Posted by Rick at 2:44 PM